It’s been a while since Hollywood attempted to bring the world of L. Frank Baum to the big screen. The last endeavor, Disney’s 1985 fantasy Return to Oz, wasn’t exactly a success, and while I personally find that rather straightforward, and admittedly dark, adventure something of an underrated treat, it’s not like it and 1939’s unquestioned classic The Wizard of Oz can be mentioned in the same breath. 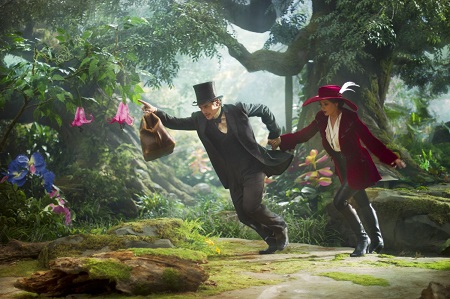 Almost three decades later, Disney returns to Baum’s writings in a big way, Oz the Great and Powerful a reported $325-million gamble the studio is betting a great deal upon. Directed by Evil Dead and Spider-Man auteur Sam Raimi, the movie is an ambitious, eye-popping marvel filled with sights, sounds and ideas befitting the author who originally imagined them. Looking at it is a candy-colored treat, and the moment selfish magician and uncertain hero Oscar (James Franco), working under the stage name “Oz,” floats into a magical realm located somewhere over the rainbow the movie becomes an unabashed visual delight that held me suitably spellbound.

If only the movie itself held together near as well. Not without its plusses, not the least of which are an orphaned little girl (Joey King) made entirely of porcelain and a winged monkey named Finley (Zach Braff) who finds himself unintentionally Oz’s confidant, the movie utilizes Baum’s stories but never with full confidence. Writers Mitchell Kapner (The Whole Ten Yards) and David Lindsay-Abaire (Rabbit Hole) have constructed a scenario that isn’t quite fully formed. While a lot of time is spent on Oz, which is as it should be, other characters like witchy sisters, the duplicitous and conniving Evanora (Rachel Weisz) and her younger, more powerful, yet semi-clueless, sibling Theodora (Mila Kunis), are given a frustrating short shrift.

The central plot will be familiar to anyone who knows either the 1939 musical and/or Baum’s writings, Raimi and company focusing on Oz as he goes on a journey throughout the strange, magical land to fulfill a prophecy that will bring about peace and prosperity. Initially tricked into thinking the good witch Glinda (Michelle Williams) is evil, his eyes are quickly opened to the truth as he realizes that Evanora has been clandestinely pulling his and everyone else’s strings right from the start. The Yellow Brick Road comes into play, as do legions of winged baboon soldiers and tall, big-hatted Winkies sworn to protect their evil leader. 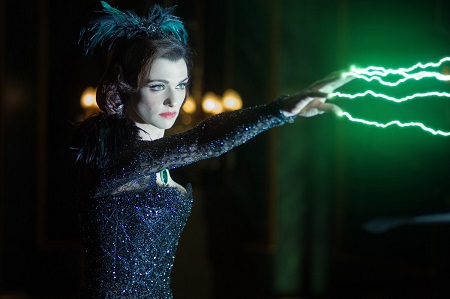 Franco makes a fine Oz, never shying from the darker, more egocentric aspects of his personality even as his humanity is awakened by the chaos and turmoil surrounding him. He is a wonderful foil, his skills as a con artists and trickster put to great use as he learns to use his ingenuity against Evanora and, eventually, a broken-hearted Theodora. Franco has an undeniable magnetism, walking through the film with a cagy confidence that’s unquestionably beguiling, and as heroes go he’s a far more complex than I anticipated going into the screening.

Weisz and Williams make the most of their sketchily written characters, attempting to give them complexities and layers the script only flirts with granting them. I can’t help but wish these two Oscar-nominees, Weisz a former winner, could face-off without being forced to float in the air and throw sparkly streams of light and electricity at one another as if part of some curiously anemic live action video game. Still, they’re powerhouse entertainers, and I must admit both have moments that got me to smile in happy contentment.

The weak link is Kunis. A solid actress, she’s fine as the innocently naïve Theodora, and her excitement to introduce whom she believes to be their land’s savior to the people of the Emerald City is delightfully palpable. It’s her eventual transformation into the Wicked Witch of the West that’s problematic, Kunis never achieving the level of gravitas that would make her embrace of evil as chilling or as unsettling as it needs to be in order to be effective. It’s as if the actress can’t connect to the darker aspects of her character, only brushing the surface of what is required, eventually making Theodora a rather toothless adversary whose defeat is never in doubt.

Even so, Raimi has constructed a family-friendly epic that is refreshing in a multitude of ways. While the visuals are lavish and lush they never overwhelm the story, most of them working in tandem with what is going on instead of calling attention to themselves just for the sake of doing just that. There is an airy levity to the story that is irrefutably wonderful, the filmmakers having an unquestioned affinity for Baum’s world that was never in doubt.

But as great as the positives are the minuses still remain. Raimi and his team have gone out of their way to deliver on the massive budget that Disney has gifted them, working so diligently on the visuals that they’ve given less attention to the secondary characters and to the plot’s climax than they should have. While I did like a lot of Oz the Great and Powerful, and while I can give it something of a begrudging recommendation, I do feel the movie never lives up to its potential. Baum’s magic is still evident, filtering in and out like a lightning bold shooting across the night’s sky. There’s just not enough of it for the film to pull off any of its signature tricks, the wizard calling all the shots stuck behind the curtain with nothing substantive to show for any of his efforts. 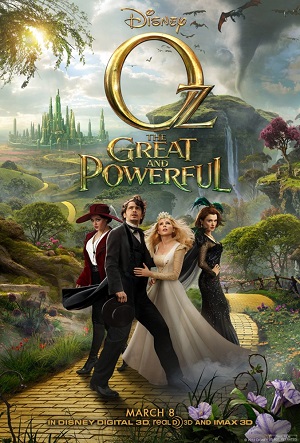