An isolated sheep farm turns into a war zone between human and animal as a family of four attempt to survive through the night after their home comes under assault be a pack of vicious, man-eating dogs.

“In a remote forested stretch of the Australian Outback, the Wilson family is struggling to make their isolated sheep farm turn a profit. Under siege by the bank, former veterinarian Carla (Anna Lise Phillips) has been forced to start a new practice even though there are few in the area that can make use of her skills. Meanwhile, outdoorsman Adam (Jack Campbell) is trying to figure out what is mysteriously murdering off their livestock, kids Sophie (Katie Moore) and Henry (Hamish Phillips) kept in the dark as to just how dire the financial circumstances truly are.

The Pack is not a modern day John Steinbeck melodrama set in the Australian wilderness. It is a not an intergenerational story of a family in crisis trying to survive bleak financial times in the face of uncaring bankers who’d love to kick the clan out of their home on the collective rear ends. There are hints of those things, elements of those stories briefly lingering around the edges, especially early on, but at no point whatsoever does director Nick Robertson or screenwriter Evan Randall Green try to make their debut feature something that it is not.

And what is The Pack? It’s a thriller. A cold-blooded, viscerally-charged horror tale of a close-knit family under siege by a pack of feral dogs intent on having all four of them for dinner. It is one single night of absolute hell, each of them forced to do the impossible as they all try to survive until dawn, hoping beyond all reason that help will arrive even if the likelihood of it happening is practically nil. It’s as if the filmmakers dropped The Birds, Cujo, Critters, Aliens and Assault on Precinct 13 into a blender and this is the smoothie they ended up pouring into the glass, asking viewers to take a big, bloody drink and hoping they’ll enjoy the taste.

I did, the pair’s flavorsome blood-curdling beverage going down so smoothly I was a tiny bit gobsmacked by just how refined and self-assured this tidy little thriller proved to be. As freshman efforts go, Robertson and Green don’t so much rewrite the rulebook as they use standard one better than just about anyone else has in ages. Eschewing CGI, keeping the gore to a surprising minimum, the pair relies upon character development, subtle camera moves and strong plot mechanics to ratchet up tension. When carnage happens – and it does it ever – it comes in sudden bursts of chaos and confusion, augmenting its power to shock and scare a substantial bit because of this.

There are the usual clichés, and the pair can’t overcome them all. When a banker drops by to talk about foreclosure it’s only a matter of time before something horrible is going to happen to the guy, while a moment of potential salvation is an obvious red herring that leads only to additional despair for the four Wilsons. Early sequences looking at some of the places Henry likes to hide items he’s clandestinely snatched from around the house will of course become important, as will locales around the farm he enjoys cavorting in without his parent’s knowledge.

Thing is, Robertson has obviously studied his Spielberg, has analyzed his Hitchcock, has focused a keen eye on Carpenter, Scott and Cameron, because even though it’s clear what it is he’s doing, that doesn’t make the first act observations any less well conceived and intriguingly presented. By the time the pack attacks, the geography of the farm, where the house is located in comparison to the clinic in comparison to the sheep pens in relation to the forest that surrounds the Wilson’s property, all of that ends up being a known commodity. So when the family is forced to run, I knew how they were going to have to get from one place to the next, giving things a logical progression that only helped as far as suspense and tension were concerned.

I also love the fact that these dogs are just exactly what they appear to be – dogs. They’re strong. They’re vicious. They work as a unit. But they don’t have superpowers. They’re not super-intelligent. They do things that a pack of feral dogs would likely do. There is nothing mysterious here, nothing supernatural, just a horrific, real-life terror that rattles the nerves and chatters the teeth.

There’s not as much gore as one might imagine, the filmmakers eschewing sequences of extreme bloodletting understanding restraint Robertson relies upon cinematographer Benjamin Shirley and editor Gabriella Muir to do much of the heavy lifting, the haunting, almost dream-like aesthetic they are able to create allowing this nightmare to assault to senses in ways that all-encompassing. The last third, in particular, is a model of kinetic efficiency, and even though by then I was pretty certain I had a good grasp on what was going to happen and when because the filmmaking was so strong I sat right there on the edge of my seat all the same anyhow. The Pack is pretty terrific, and I can’t wait to return for a second bite sometime soon.”

Yep. Still a lot of fun, that’s The Pack in a nutshell. Perfect? No. Freakishly enjoyable for those who like animals-gone-wild creature features? You bet, and as such I’ll likely be barking about this film’s simple pleasures for some time to come.

The only extras included here are a short, behind the scenes promotional featurette, The Making of “The Pack” (7:57), and the film’s Original Theatrical Trailer (1:49); that’s it, nothing more.

I really like The Pack. It’s simple, straightforward and doesn’t pull any punches. The movie also resolves itself, which so few modern horror/thriller opuses have the guts to do. Scream! Factor’s Blu-ray is solid, especially on a technical front, and as such fans could do a heck of a lot worse than making the decision to add this disc to their personal libraries. 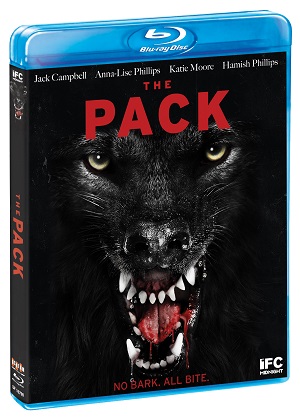