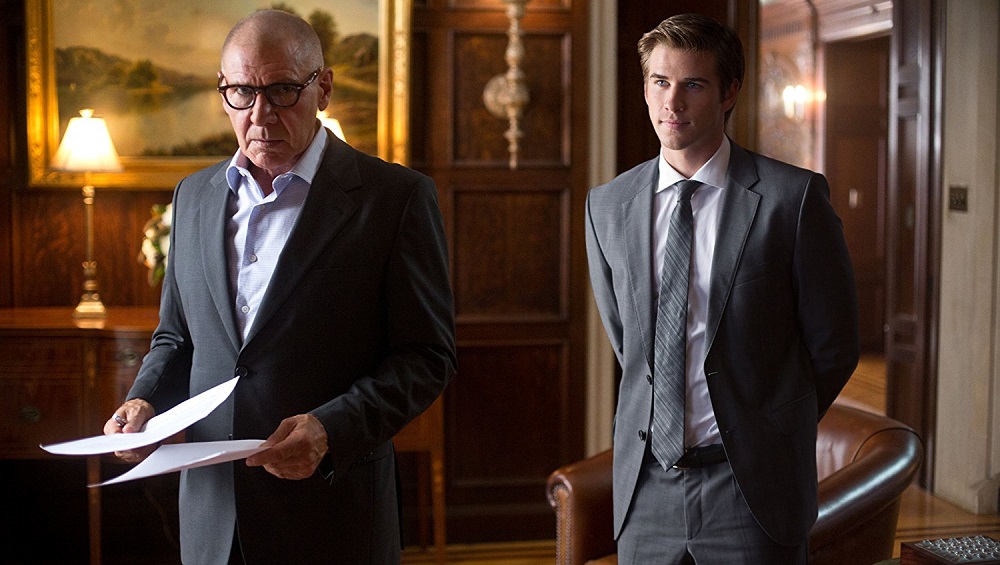 Adam Cassidy (Liam Hemsworth) is a rising superstar in the New York tech community. But when he has an unexpected row with his boss Nicolas Wyatt (Gary Oldman), he and the rest of his team, including best friend Kevin (Lucas Till), are suddenly out of a job. 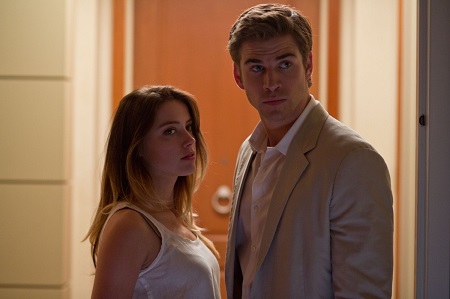 Nothing is as it seems. Turns out Wyatt has had his eye on Adam for some time, feeling this young, eager and ambitious up-and-comer is perfect for a little project he’s been planning. He needs someone to go undercover and work for his former mentor, cell phone titan Jock Goddard (Harrison Ford), and once inside start stealing corporate secrets he can use for his own company’s gain. More, Wyatt has all the tools to make Adam do it, his shady security chief (Julian McMahon) not above putting the hurt on the lad’s friends or threatening the life of his elderly father, Frank (Richard Dreyfuss).

The tech thriller Paranoia did not screen for Seattle press (although, it should be noted, it did screen for press in a number of other cities; why the home of Microsoft and other tech giants was slighted I have no idea), and considering this is a film starring the likes of Ford, Oldman, Dreyfuss, rising star Hemsworth, Amber Heard and a handful of others (including recognizable faces belonging to the likes of McMahon, Till, Embeth Davidtz and Josh Holloway) this is something of a minor surprise. I say “minor” because, in all honesty, the movie just isn’t very good even with all that talent involved, and while it’s hardly the disaster one would surmise the secrecy would hint at, that doesn’t make the resulting film any more memorable.

Based on a book by author Joseph Finder, working from a script Jason Hall (Spread) and Barry L. Levy (Vantage Point), this Robert Luketic (The Ugly Truth, 21) directed effort is all kinds of dumb. Additionally, it’s the kind of dumb that’s insulting, set in a world filled with super-smart people all doing the stupidest of things for no discernible reasons while also making idiotic decisions one after the other. This is a motion picture set inside the high-tech industry where when a security malfunction arises the person in charge starts screaming for help from “the I.T. guy” because, naturally, no one at a place that designs microchips, computers and cell phones would know what to do.

One wonders how a movie built on layer after a layer of hokum even sees the light of day, let alone attracts talent on the level of Ford and Oldman (one imagines they were very well paid). For as complex and convoluted as all of this supposedly is, it’s not difficult to ascertain what the general twists complicating matters for Adam will be or who he will ultimately turn to in order to dig himself out of his self-dug hole. The contrivances start right away with the protagonist having a one night stand with the very woman he’ll later need to romance in order to gain entry to Goddard’s secret projects, and they only begin to pile one on top the other right after that.

It’s not terrible, the cast, even going through the motions, is too good for that to be the case. But just because it’s not the worst film of 2013 doesn’t mean I’d ever in my right mind tell anyone to watch it, even fans of any of the actors almost certain to be disappointed by what transpires. It’s silly, growing increasingly so as it goes along. Worse, the film borders on offensive, all of the key female characters either window dressing, pathologically stupid (and sex-obsessed) or deviously manipulative. For those who find Kick-Ass 2 misogynistic (it is) I ask you to take a look at this and try to decide which film’s worse, for as morally dubious as she might be one must admit Hit Girl has more smarts, guts and courage in her little finger than any of the women showcased here have in their collective totality. 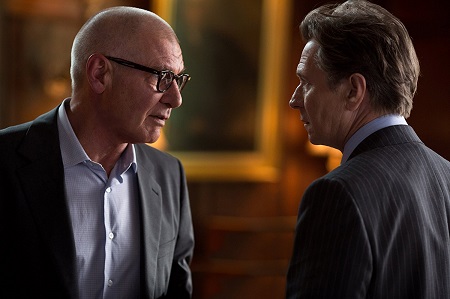 There is one great moment, Ford and Oldman sharing a second act scene inside an exclusive New York club verbally sparing with delectable relish. Each seems to enjoy the other’s company, the actors playing off one another gloriously, neither saying a lot yet both speaking volumes with their mannerisms, tone and facial expressions. You get the sense that this single moment is why they both signed on to the project, both probably saying to themselves that the script might be hogwash but the opportunity to square off against such a talented rival was too great an opportunity to pass on.

So what? Paranoia goes exactly where you expect it to and does so with plodding efficiency, Luketic not going out of his way to hide any of the script’s more ludicrous missteps. If not for the talent involved, one imagines this late summer thriller would otherwise have ended up in the straight-to-DVD dustbin. Considering how fast it’s likely to disappear from theatres, it could still potentially end up there sooner rather than later. 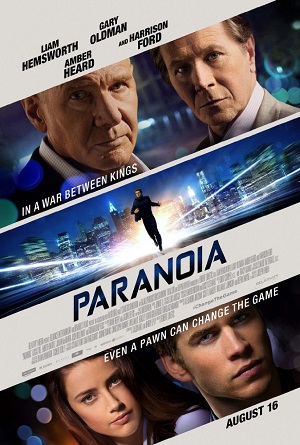