Pirates of the Caribbean: Dead Men Tell No Tales (2017)

Latest Pirates of the Caribbean a Deadly Bore

For almost a decade, Henry Turner (Brenton Thwaites) has been searching for the lost Trident of Poseidon, a fabled mystical artifact that supposedly has the power to end every curse bestowed upon those sailing upon the sea. For as long as she can remember, astronomer Carina Smyth (Kaya Scodelario) has been looking for the same item, certain that if she can find this mythical treasure she’ll learn the identity of the father who gave her up for adoption two decades prior. While they’ve traveled in similar shipping lanes as they circumnavigate the globe, these two strangers discover they’re on the exact same mission when they both try to track down the one man who could assist them in their pursuit, the long forgotten former scoundrel of the High Seas, Captain Jack Sparrow (Johnny Depp). 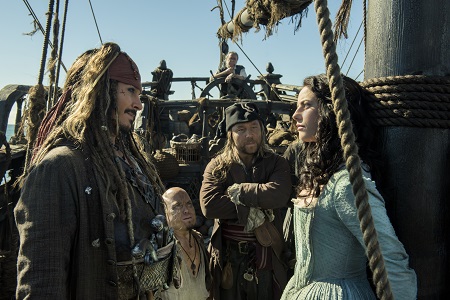 They are not the only ones after the drunken pirate. Long trapped within the confines of the Devil’s Triangle, the murderous Captain Salazar (Javier Bardem) and his crew, now ghosts who revenge themselves on all sailors unlucky enough to enter their domain, have suddenly been granted their freedom. The single-minded undead Spaniard immediately sets out to find Sparrow, the man who tricked him and his crew to their doom so long ago, and with the aid of a terrified Captain Hector Barbossa (Geoffrey Rush) he will find him in no time. But when Salazar learns Turner and Smyth, aided by the man who killed him, no less, are all searching for the Trident, suddenly the race is on to find the item’s resting place, all three Captains eager to bend its powers to their respective will.

The fifth chapter in Disney’s amazingly lucrative swashbuckler franchise initially based on the famous theme park ride, Pirates of the Caribbean: Dead Men Tell No Tales is the supposed last voyage of Captain Jack Sparrow and his infamous ship the Black Pearl. With the arrival of Henry Turner, the film attempts to bring things full circle, his pursuit of the Trident directly related to the curse his father, Jack’s former ally and friend Captain William Turner (Orlando Bloom), has been suffering under since the climax of 2007’s Pirates of the Caribbean: At World’s End. Screenwriter Jeff Nathanson (The Terminal), who conceived the story with franchise veteran Terry Rosio, goes out of his way to try and tie up every loose end left unresolved by the previous films especially as they pertain to Jack Sparrow and Hector Barbossa, their relationship the core element everything ends up revolving around.

As fine and dandy as all that is, it’s still difficult to get excited about a single thing happening in this sequel. While Oscar-nominated Kon-Tiki directors Joachim Rønning and Espen Sandberg do a more than adequate job behind the camera as far as their big budget Hollywood debut is concerned, not even they can do enough to conceal just how half-baked and underdeveloped this feature proves to be. While something of a minor step up from 2011’s Pirates of the Caribbean: On Stranger Tides, the movie still has trouble manufacturing a reason for the audience to care whether any of the core cast of characters come through this adventure alive. Worse, it does a monumentally poor job of bringing William Turner back into the fold, the resolution to his story landing with a gigantic, disappointing thud.

Bardem is terrific, however, and while Salazar is never the villain he maybe could have been (I swear he spends half his scenes delivering large swaths of exposition explaining why he hates Jack Sparrow so very, very much), the talented actor still appears to be having a grand time unleashing this larger than life performance. As for the returning cast, Rush fares best, and not only is Barbossa’s story arc the most compelling one, the actor also manages to invest a solid chunk of emotion into his scenes, making the learning of what’s continually driving him onward worthy of discovery.

Thing is, while Rønning and Sandberg hardly appear to be overwhelmed by the sequel’s massive set pieces and state-of-the-art visual effects, they just as clearly have trouble generating a sense of fun or adventure, and other than an early sequence involving a bank heist gone massively wrong and a suspenseful zombie shark attack involving Jack and Henry, there’s little on the action front to get excited about. Not that this is entirely their fault. Nathanson’s script is so underdeveloped, so pointlessly convoluted, I’m not sure consistent thrills and chills were even possible. It’s a lot of sound and fury that continually adds up to nothing, and not even a surprise finale showcasing a fairy tale love affair renewed in proper happily-ever-after fashion was enough to raise my pulse above a lukewarm simmer.

I won’t hold it against anyone who is entertained by Pirates of the Caribbean: Dead Men Tell No Tales. It’s a handsomely mounted production, and there is some moderate charm in seeing familiar characters return for one last swig of rum. But even with a not-so-subtle passing of the torch hinting at potential future sequels or spinoffs, here’s hoping this really is the last cruise of the Black Pearl, those pirates at Disney getting away with stealing way too many box office dollars by delivering one underwhelming voyage after another for far too long. 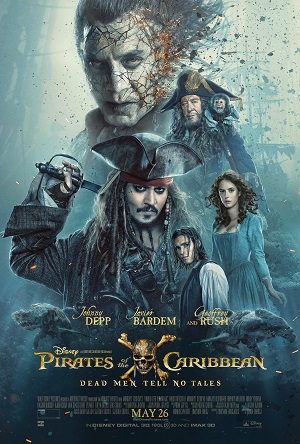