College freshmen Ethan (Phillip Andre Botello), David (Zack Weiner) and Justin (Zachery Byrd) are looking to join a fraternity. After their misfit status gets them turned down to the point at every house on campus the trio are on the verge of giving up. But when they are mysteriously invited to an exclusive party at gigantic frat offering them the opportunity of a lifetime, all three are ready to pledge then and there.

Instructed to come back the following day, they and a few other special recruits are put through a sadistic series of tests that their tormentors Max (Aaron Dalla Villa), Ricky (Cameron Cowperthwaite) and Ben (Jesse Pimentel) claim is designed to bring out the best in them. This couldn’t be further from the truth. Turns out Ethan, David, Justin and their fellow pledges are nothing more than lambs for the slaughter, the members of this particular fraternity only interested in watching each of them die and precious little else.

I ended up not caring very much for director Daniel Robbins (Uncaged) and writer/star Zack Weiner’s Pledge. The horror-thriller has its moments, and there is certainly plenty of unsettling nastiness that’s guaranteed to keep genre gore-fanatics happy. But the movie isn’t particularly interesting and I can’t say I was ever emotionally moved by the plight Ethan, David and Justin found themselves in. The level of stupidity as this trio allows themselves to be put in such a dire situation ended up not sitting that well with me. More, while I appreciate how hard Robbins and Weiner work to create a sense of mystery amidst all of the purposefully senseless violence, that they don’t really lay the groundwork for explaining just about anything that is going on truly began to annoy me as events went on.

Yet probably the biggest problem is that I simply did not care about two-thirds of the trio, and because of that it was hard for me to work up any energy to root for their collective survival. Don’t get me wrong. I do like that Weiner gave himself the most obnoxious role of the three, David an energetically goofy nincompoop who’s like some refugee out of an ‘80s teen sex comedy like Porky’s or Revenge of the Nerds only who has been dropped into the middle of a modern horror flick. But that doesn’t mean I wasn’t still pulling for him to get killed at times, his obsession with the materialistic aspects of fraternity life so all-encompassing he doesn’t bat an eyelash at even the most heinous acts Max, Ricky and Ben throw his and his fellow pledges’ way as a part of their supposed initiation.

As to that initiation, I kind of think that the filmmakers crank up the nastiness a bit too quickly. The very first task all of the pledges find themselves encountering is the physical mutilation of their own bodies, and even in the face of extreme peer pressure to endure no matter what how the majority of them don’t attempt to leave right then and there made absolutely no sense as far as I was concerned. I get the idea, and it wasn’t like I didn’t want these college freshmen to stay put because otherwise had they tried to escape the movie would have been all of 30 minutes long. But the rationale that each of them is so intent on finding a place to fit in and belong to that they’d allow themselves to be willing recipients of such inhuman torture didn’t connect because the movie never bothered to flesh out these characters beyond their most rudimentary aspects, and because of that believability gets thrown out like an empty keg before the main facets of the story have even kicked into gear.

I liked Botello, the actor giving Ethan intelligent layers his two companions lack. He’s initially the only one willing to speak up in regards to all of this insanity. He’s also the only one who shows any empathy or sympathy to any of the other characters who pop up during the movie who might also end up a potential candidate for slaughter. Botello gives things a level of sincerity that straddles the line between comedy, drama and terror nicely, and when push comes to shove and the pledges either must lay down and die or choose to stand up and fight with valiantly violent pugnaciousness he’s the only one to make these moments ring with anything even slightly resembling the truth.

There are some good shocks littered throughout, and out of the three primary assailants toying with the pledges Cowperthwaite flaunts a legitimately chilling demeanor that noticeably got under my skin. Even if it isn’t unexpected, the final confrontation between the surviving members of the principal trio and their remaining attackers is expertly staged, and while I’d have rather had a different outcome I cannot say there weren’t a handful of satisfying little moments that got me to smile in modest appreciation. Not enough to feel like Pledge is worth a recommendation but still enough to admit I will admit that even with all my reservations there’s at least a couple of positives to be found here. Whether that is enough for a genre fanatic to splurge on a matinee ticket or pay the price of a VOD download I do not know, this bloody initiation into collegiate terror a purposefully exploitive mixed bag to say the least. 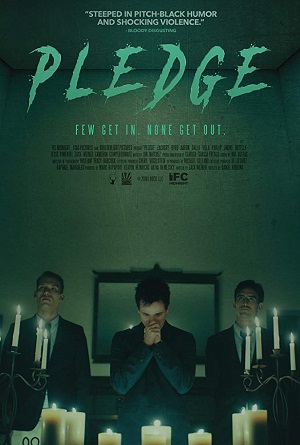