After a privately owned space station mysteriously explodes, a fleeing astronaut trying to get back to Earth safely inadvertently puts all of humanity in danger. Three mysterious canisters plummet from the sky, each landing in a different corner of the United States and all of them sniffed at, and in some cases even eaten, by a trio of creatures indigenous to those regions of the country. At the San Diego Zoo, a rare, unusually sociable albino silverback gorilla named George encounters one of these pieces of space debris and in the process finds himself infected by a strange green mist. Strength, agility, size and aggression begin to increase by incredible leaps and bounds, respected primatologist Davis Okoye (Dwayne Johnson) understandably worried about his simian friend.

Enter disgraced geneticist Kate Caldwell (Naomie Harris). She was one of the scientists whose work was vital in being able to put the pieces of this DNA serum together. For a variety of ethical and moral reasons, Kate’s turned against her former employers, cutthroat corporate pharmaceutical and genetics titans Claire (Malin Akerman) and Brett Wyden (Jake Lacy), and she needs Davis’ help in order to show just how crooked the siblings are. Also involved in all this craziness is a shadowy government operative named Russell (Jeffrey Dean Morgan), and it’s initially unclear if he’s friend or foe. But when George starts destroying Chicago with two other gigantic mutated creatures, Davis, Kate and Russell are forced to work together to save the city, the obsessed primatologist also hopeful he’ll be able to convince the formerly friendly gorilla to fight alongside them against the other beasts.

For a movie inspired by an old school arcade video game, Rampage is far more convoluted than anticipated. The plot, credited to four different writers (but one only imagines how many uncredited ghostwriters likely put in their own 25-cents, too) is insanely obnoxious. Director Brad Peyton, reuniting with Johnson for the third time after Journey2: The Mysterious Island and San Andreas, goes out of his way to emphasize the many characters inhabiting this story as best he can, trying to give everyone in the cast their own individual moment. The reality, however, is that this is still nothing more than a big-budget Hollywood studio disaster flick about gargantuan genetically mutated animals destroying Chicago, and trying to say the picture is more than that would just be a waste of breath.

Not only does Johnson portray one of the most respected primatologists in the country, but Davis also just so happens to be an ex-Special Forces operative for the U.S. military with a redacted file filled with top secret exploits throughout Africa and Asia battling big game poachers. He’s a one-man force of nature who can stand toe-to-toe with a five-story ape, a flying 300-foot wolf and a massive alligator so large measuring it head to tail is practically impossible. This is a guy who can do alone what the Army, Navy, Marines and Air Force cannot accomplish all combined, and the movie asks the viewer to take all of this as an indisputable fact no matter how absurd a statement all of that proves to be.

It only gets sillier from there. Thankfully, most of the key cast members are in on the gag. Johnson could do this sort of thing in his sleep. Akerman vamps it up gleefully as the most sadistic and heinous corporate villain in recent memory. Lacy is all jittery over-caffeinated nonsense as he utilizes a variety of one-liners and clownish body movements in order to try and make his character relevant. As for Morgan, I have no idea what the heck he is doing but I absolutely adored every single solitary second of his performance, the actor sauntering through the picture with a take-no-prisoners, I-don’t-give-a-single-WTF-what-anyone-else-thinks attitude that’s ridiculously magnificent.

I love Harris. She’s a spectacular actor, her turns in films as diverse as 28 Days Later, Mandela: Long Walk to Freedom and especially Moonlight all things of absolute, unparalleled beauty. Yet I’m not sure she’s a good fit for this. Harris is treating things with a level of seriousness that none of her castmates are even making the faintest attempts to emulate. She isn’t bad. She isn’t giving a poor performance. It’s just a different take on the material and one, sad to say, I didn’t think worked particularly well, and for Harris I’m modestly certain this isn’t a role she’s going to be placing all that high on her resume anytime soon.

Not that anyone else will likely be doing so, either. For all its visual ingenuity, for as many clever in-jokes referring to the original 1986 arcade game as there might be, this is an unrelentingly stupid creature feature, and I can’t exactly say I was as overjoyed watching it for the entirety of its reasonably well-paced 107 minutes. As much as I adore old school Toho Studio Godzilla films, there is only so much inanity I can take before my eyes start glazing over and I no longer care about a single solitary thing happening from a story perspective. On that front, Peyton’s latest had me heading in that direction fairly early on only to vault past that point the moment the heroes and the rampaging monsters all met up in Chicago. As great as some of the scenes of destruction and mayhem were I just wasn’t invested in seeing how things were going to turn out emotionally, finding out if Davis and George’s friendship was going to endure after all this carnage and madness not exactly holding my interest.

It’s still a hard film to hate. The picture embraces its preposterousness in a manner that’s oddly endearing, the majority of the cast going right along with what Peyton has concocted almost as if their very careers depended upon them doing so. But even I can only take so much when it comes to this sort of lunacy, and there were times where I felt the filmmakers were going out of their way to work every one of my last nerves almost as if I’d personally wronged them all somehow. While much better than it has any actual right to be, Rampage is still hardly the city-destroying monster smash it maybe could have been, and as such I have trouble believing I’ll be taking the time to reevaluate my opinion anytime soon. 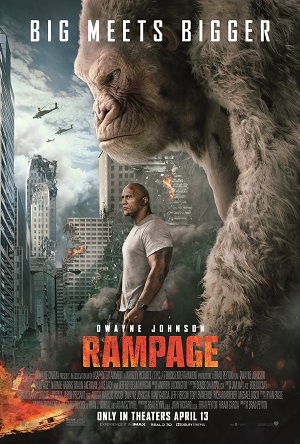