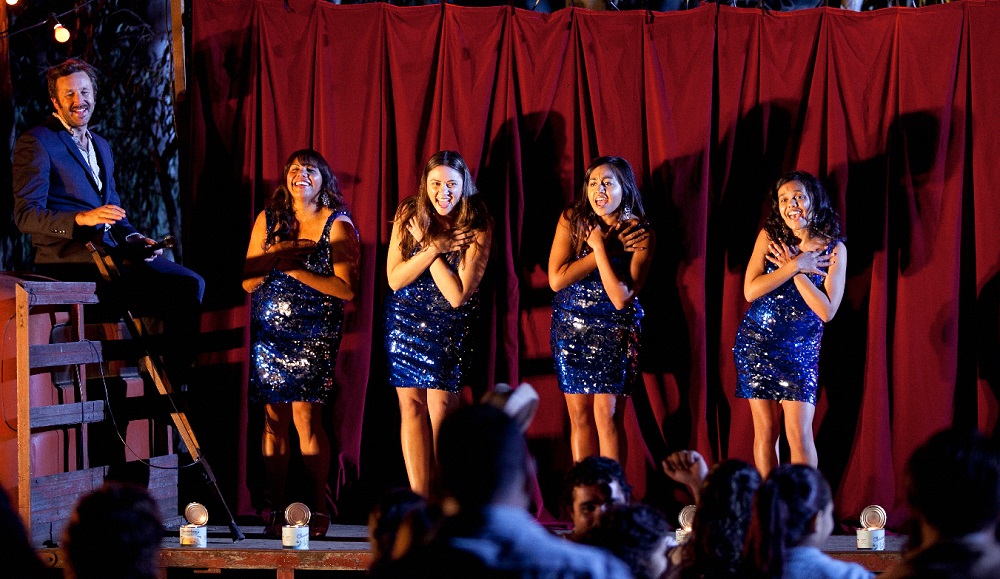 It is 1968. Aboriginals in Australia have just earned the right to vote, but that doesn’t mean the country’s White population treats them as being their equal. That means sisters Gail (Deborah Mailman), Cynthia (Miranda Tapsell) and Julie (Jessica Mauboy) don’t have a chance at winning a singing competition at a rundown local pub, and while their rendition of a Meryl Haggard hit is easily the best thing the audience heard nonetheless they’re still going home losers. 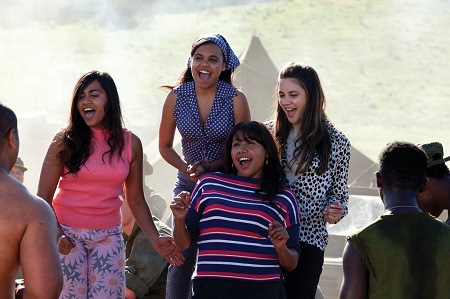 But they’re not losers as far as Dave Lovelace (Chris O’Dowd) is concerned. The R&B loving Irish drunkard may not know a lot, but he does know talent when he sees it, and these three young aboriginal women have that in spades. When the youngest, Julie, expresses interest in auditioning to be an act the American USO sends to Vietnam to entertain the troops Dave urges her and her sisters forward, and under his tutelage, which mainly consists of dropping the Country and learning to sing Soul, he’s positive he can transform the lot of them into bona fide stars.

Things progress pretty much as you expect them to in The Sapphires. The girls are reunited with their fair-skinned cousin, Kay (Shari Sebbens), taken from their home by the government as a child in hopes she’d assimilate into White culture, and thus the quartet heads to Vietnam with plenty of emotional baggage in tow. Dave and Gail enter into a love-hate romance, Cynthia revels in being the center of attention and Julie learns being a superstar might not be everything she once imagined it to be. Through it all the four women put past events behind them and come together as a family, dodging various dangers as they realize the world is their proverbial oyster and the only thing holding them back are the restraints they impose upon themselves.

Based on the play by Tony Briggs, itself inspired by the real story of his own mother and her relationship with her three cousins (two of which, the sisters of the quartet, did in fact tour Vietnam as USO singers), The Sapphires doesn’t have an original bone in its body. This is Dreamgirls meets Good Morning, Vietnam crossed with a bit of Rabbit-Proof Fence, all of it directed by Wayne Blair in a fairly straight-forward a manner. The beats are obvious, as are the song selections, the romantic revelations, the emotional travails and the eventual happy endings. It’s as rudimentary as anything I’ve seen in this year, and I cannot say I felt a second of surprise during any one moment of the film’s relatively brief 103-minute running time.

Yet here;s the rub: I liked this movie. The Sapphires made me smile. It got me tap my foot in appreciation. It even brought a tear or two to my eye. I thought Mailman was outstanding, Mauboy a spunky fireball of fierce determination and Sebbens a source of somewhat surprising resilience and strength I was continually drawn to. I thought that Blair staged the musical numbers with flair and energy, and while the emotional maelstroms assaulting the four women were familiar the script (co-written by Briggs and Introducing the Dwights scribe Keith Thompson) never insults the viewer’s intelligence or dives into schmaltz as deeply as it could have.

Then there is O’Dowd. As good as he’s been in movies like Bridesmaids and Friends with Kids, this is the first time in my opinion he’s been allowed to break out of the self-effacing, sarcastically acerbic mold he’s been somewhat stuck in. Blair gives him the freedom to work, move and emote, giving Lovelace a three-dimensional nuance that’s captivating. His work with Mauboy is priceless, the two sharing a pugnacious chemistry that fits both their characters and the material beautifully. 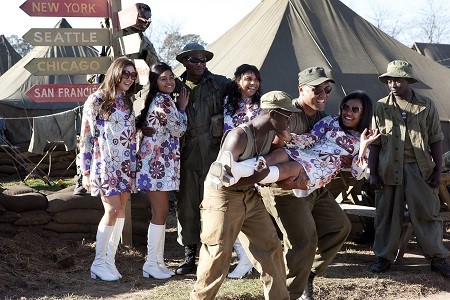 It’s hard for me to get too rapturous about the film, of course. The template it follows is so tried and true it probably should have been retired from use decades ago, and the fact the filmmakers throw in a ham-fisted, saccharine-drenched third act bait-and switch-involving an unexpected Vietcong attack on a U.S. military base is close to inexcusable. There’s a lot of stuff here that borders on melodramatic excess, and as such I do find it difficult to embrace Blair’s debut feature with both arms.

And yet, The Sapphires is just too much darn fun for me to get all that worked up about its shortcomings. By the time I left the screening room I was whistling a fairly happy a tune. As unabashed audience crowd pleasers go and a few sour notes notwithstanding, this is definitely one song I kind of can’t wait to sing again. 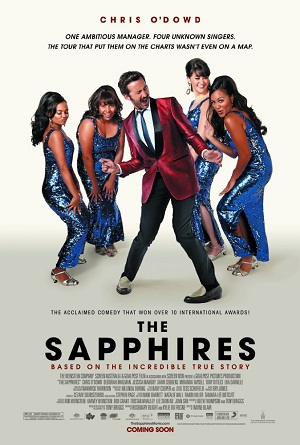