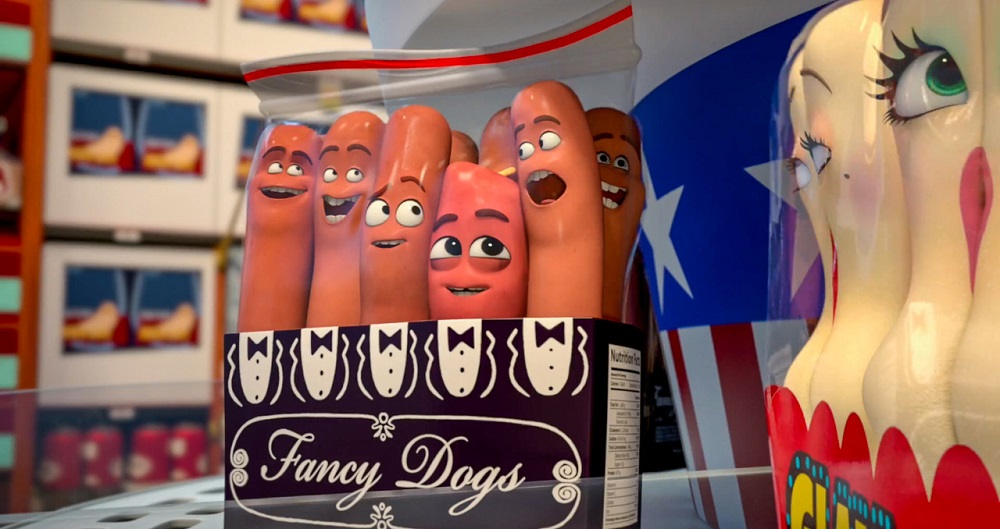 “In here, we keep our wieners in our packages. That’s how it is.”

“Tomorrow is the Fourth of July. Sausage Frank (voiced by Seth Rogen), along with best friends Carl (Jonah Hill) and Barry (Michael Cera), is beyond excited. Today is the day he and his compatriots will be selected by the Gods to be placed inside their loving basket of care. Today is the day they will be whisked from this supermarket existence through the doors of magical wonderment. Today is the day he’ll be released from his package to hopefully fill the fluffy brown and white bun of his next door aisle mate Brenda (Kristin Wiig). It’s a glorious day. The best day. A day all of them will remember for the rest of their lives. After all, safe in the hands of two-legged Gods, what could possibly go wrong?

Due to a series of unfortunate events, Frank and Brenda are separated from their respective packages right before a particularly friendly God seems eager to take them through the glass doors of wonderment. Determined to be selected by the Gods, they join forces with bagel Sammy (Edward Norton) and Middle Eastern flatbread Lavash (David Krumholtz) to traverse the store back to their proper aisles and insert themselves into new packages. But during their journey Frank, courtesy of nonperishable soothsayers Grits (Craig Robinson), Twink (Scott Underwood) and the seemingly all-knowing Firewater (Bill Hader), makes a startling discovery, one that shatters his faith in the Gods and makes him realize he, Brenda and everyone else inside the supermarket will have to fight back if they ever hope to avoid a gruesome, horrifically unappetizing fate.

Following in the footsteps of Team America: World Police, South Park: Bigger, Longer & Uncut, Heavy Metal and Fritz the Cat, Sausage Party is an R-rated animated feature that never met a pun, sex joke or un-PC satirical jab it didn’t want to warmly embrace. The movie fits right inside the wheelhouse of creators Rogen, Hill, Kyle Hunter, Ariel Shaffir and Evan Goldberg, fans of This Is the End, Neighbors, The Interview or The Night Before almost certain to find plenty to go nuts about here as well. And if directors Greg Tiernan (a veteran of PBS’ ‘Thomas and Friends’) and Conrad Vernon (Monsters vs. Aliens, Shrek 2) don’t initially feel like good fits to helm all of this weirdness they catch on fairly quickly, the manic energy driving things forward having a controlled madness to it that fits the whacked-out proceedings nicely.

Still, while there is fun to be had, and even if I did laugh more than a handful of times, personally, Sausage Party isn’t a cinematic meal I found particularly satisfying. A central gag involving Frank wanting to worm his way inside Brenda’s bun gets tiresome, while a number of the remaining gags are far too obvious to do more other than offer up a few polite chuckles if little else. The journey through the supermarket seems to take forever, and even if a couple of the stops along this trek are humorous – the introduction of the amorous Teresa del Taco (a charmingly game Salma Hayek) particularly so – they aren’t so much so my moderate boredom was noticeably lessened. Also, the sex and drug jokes Rogen and company love to trade in are growing much too obvious at this point, and while there is something chuckle-worthy in seeing a sausage, a bottle of whiskey, a box of grits and a Twinkie smoking pot, the gag itself can’t help but get old seconds after it is unveiled.

There are some terrific bits, not the lease of which is an aside featuring the diminutive Barry hiding out in the home of a scatter-brained addict (an unrecognizable James Franco) who makes friends with a number of frightened, half-eaten munchies, including the wheelchair-bound brainiac Gum (Underwood again). A sequence when this ragtag group discovers the power they have over the human mind while in the midst of a psychedelic trip is glorious, as is the revelation of what happens when the human attempts to use Barry to satiate his drug-fueled munchies.

Yet, while the vocal work is aces across the board (Norton is kind of spectacular, while Wiig tosses out droll pithy comebacks with viciously cutthroat ease) and the animation is strong throughout, excuse me if I just didn’t get excited about almost anything Sausage Party had to offer. While there’s not a lot wrong with the recipe, my pallet just didn’t respond to what Rogen and company were cooking up, and as such this ended up being one meal that left me hungering for something more substantive, constantly hoping for a second course that sadly hadn’t been prepared for me to taste.”

I still don’t get it. While Sausage Party has some amusing bits, personally the comedy doesn’t do a lot for me. I just don’t laugh, at least not a lot, trying to watch it again for a second time a far more lugubrious affair than I expected it to be.

Seth Rogen’s Animation Imaginatorium (1:05) – This is awesome. Watch it.

I’ve come to the conclusion that Sausage Party just isn’t for me. I don’t get it. Same time, the movie has its fans. More, Sony’s Blu-ray presentation is immaculate. For those that find the film funny, picking up this disc for the library is as scrumptious a decision as any they’re likely to make throughout the remainder of the year. 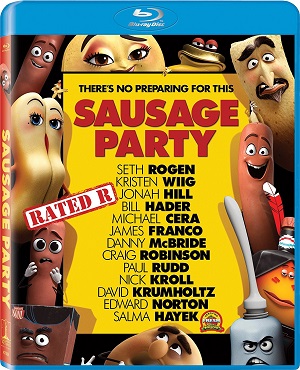