Four Massachusetts teenage girls, Hallie (Julia Goldani Telles), Wren (Joey King), Chloe (Jaz Sinclair) and Katie (Annalise Basso), get together for a night of clandestine drinking while talking about boys, school and their future plans. Bored, they overheard a rumor earlier in the day that their guy friends were going to get together later this evening in order to summon the mysterious Slender Man. Deciding to investigate this urban legend for themselves, they stumble upon an internet site that claims to have posted the ritual that will allow curious youngsters to contact this ethereal supernatural being. 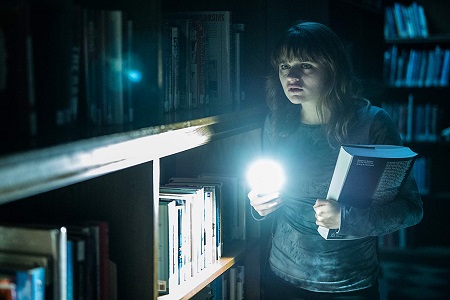 They perform the ceremony thinking that doing so will only be a harmless bit of spooky fun, never considering that Slender Man might be real. But after Katie mysteriously disappears into the woods during a school outing it begins to appear that this urban legend might not be so fictional after all. Soon each of the girls is experiencing various forms of psychological trauma spurred on by visions of an obscenely tall faceless man dressed in a three-piece suit with squid-like arms outstretched to embrace them. With Chloe’s sanity hanging by a thread and Wren madly researching Slender Man’s origins in hopes of stopping him from stalking her or her friends, Hallie isn’t as quick to believe what’s happening isn’t just some fanciful flight of their combined terrified imaginations.

Based on a creature and a mythology dreamt up by Eric Knudsen in 2009, Slender Man is as gigantic a missed opportunity as anything I’ve seen in ages. Director Sylvain White (Stomp the Yard, The Losers) and writer David Birke (Elle, 13 Sins) have crafted a motion picture that’s never as interesting as it wants to be and does a poor job of maintaining tension and suspense throughout the majority of its 93-minute running time. While the opening half hour introducing the four main characters and setting up the supernatural scenario is solid, the film grows to be less and less interesting as it goes along. The midsection is particularly ponderous, while the climax is a mishmash of unfinished ideas and incoherent storytelling that left a bad taste in my mouth. It doesn’t work, and what should have been an unsettling journey into the petrifying unknown instead becomes a tedious exercise in genre futility the less said about the better.

In all fairness, there are reports that White and the studio didn’t see eye-to-eye in regards to the finished film, and there are moments where it feels as if this one had been edited together with a jackhammer and not with any sort of eye for detail. This is especially true during the last third, the climactic showdown seeming to come out of nowhere, while an entire subplot devoted to Hallie’s younger sister Lizzie (Taylor Richardson) doesn’t make a lick of narrative sense. Wren, who in many ways is the one driving the plot forward as the only person who seems to realize the girls needed to start fighting back against Slender Man right from the get-go, remains a frustrating enigma, making choices for inane reasons that are maddening in their grotesque stupidity. As for the ending, it’s nothing more than fog-drenched visual misdirection coupled with some eerie sounds of the outdoors that all add up to zero, and even a creepy image of the titular demon embracing his chosen prey wasn’t enough to set my pulse racing beyond what would be construed as normal.

I don’t get the online video that assists the girls in their summoning of Slender Man. It’s as if White and Birke had recently watched Gore Verbinski’s 2002 version of The Ring and thought to themselves the one thing their film was missing was a retro bag of creepy visual weirdness so they threw some in just for the heck of it. They also can’t seem to get a firm grasp on who or what their titular character is, almost as if they like the idea of Knudsen’s creation even if they never had the first clue as to how to effectively utilize him. While I liked the allusions to H.P. Lovecraft, this supernatural boogeyman is still too ephemeral to be threatening, the few scares that are generated due more to Luca Del Puppo’s (Emelie) cinematography, Jeremy Woodward’s (Thoroughbreds ) production design and Brandon Campbell (The Thinning) and Ramin Djawadi’s (Iron Man) effectively discombobulating score than they are because of anything character-driven or emotionally substantive. 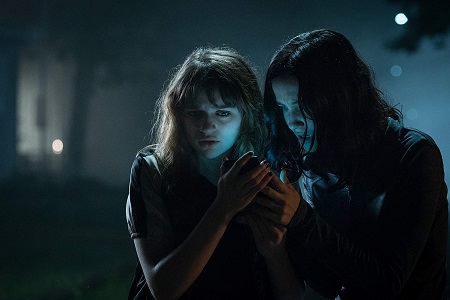 Rising star Telles, known for her work on television appearing in “Bunheads” and “The Affair,” does her best to turn in a complex performance, and for a little while I thought she was going to give viewers a reason to watch this misfire all on her own. But while she does far more for the film than it in turn does for her, after the opening act Hallie’s refusal to take seriously the paranormal undertones of what is going on becomes more than a little silly. Still, Telles gives it her best shot, and her emotional commitment to her character is undeniably laudable.

I honestly can’t say I hated Slender Man. It is well cast and, as already mentioned, is really well shot by Del Puppo. But the inherent creepiness of the titular character never resonates and as such there are precious few scares. Even if this isn’t the film White and Birke set out to make I’m still at a loss to figure out what the pair could have done differently in order to make their horror entry even moderately worthwhile. This is nothing more than a forgettable disappointment, Knudsen’s creation deserving of a better cinematic debut than this sadly turns out to be. 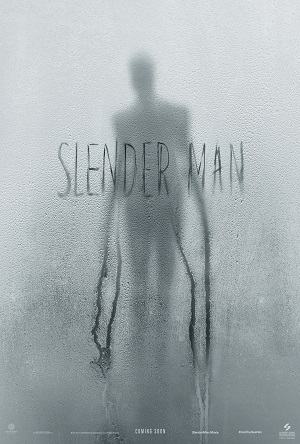