In 1991 eight scientists locked themselves away for two years inside a research facility dubbed “Biosphere 2.” Located in Oracle, Arizona, this massive installation was designed for scientists to simulate what it might be like to live in a closed ecological environment that was intended to sustain human life as if it were in outer space. Dubbed “Terranauts,” these individuals encountered numerous obstacles during their stay and generated a fair amount of controversy. Still, for two years they remained more or less cut off from the outside world, finally emerging in 1993 to a great deal of ballyhoo and fanfare.

Utilizing a treasure trove of archival and behind-the-scenes footage coupled with interviews with a number of the key players in the Biosphere 2 drama, Matt Wolf’s Spaceship Earth is an undeniably fascinating documentary time capsule that’s incredibly easy to sit down and watch. It is also disappointingly toothless when it comes to analyzing some of this compelling story’s more tantalizing and complex questions, the film’s last third especially frustrating.

Not to say that this still isn’t an engaging piece of nonfiction. I was fascinated by the story that Wolf was telling. The first third is particularly gripping. The filmmaker introduces the viewer to many of his central players, most notably Biosphere 2 co-founder John Allen. Inventor. Pioneer. Entertainer. Cult leader. Charlatan. Genius. All of these tags and more have been tossed his way on several occasions, and listening to him speak about the achievements he and his ardent group of friends and fellow innovators have accomplished over the decades is riveting.

I honestly loved learning more about all of the countless scientific expeditions he helped lead throughout the world during the 1960s and ‘70s. The best bit involves the crazily inspired fever-dream of discovery that resulted in the designing and the building of the R/V Heraclitus, manufactured to explore the Earth’s oceans in all of their mysterious minutia. Seeing the archival footage of the team setting out to sea for the first time is something else, my heart leaping for joy along with that of the vessel’s crew just at the moment they realize their eccentric endeavor has met with rousing success.

But the main focus is, as it should be, on the construction and the utilization of Biosphere 2. I remember being a youngster in high school when the eight terranauts entered into their new living quarters for their two-year journey into what was hyped to be complete and total isolation. It was like something of a Ray Bradbury story come to life, this disparate group of individuals clad in their futuristic red jumpsuits headed off to do something most would consider impossible.

In some ways those naysayers were proven right. There were many issues with Biosphere 2, some of them anticipated, a whole heck of a lot of them unforeseen. Listening to the various living members of the original crew talk about the multitude of challenges they faced is inherently intriguing. I loved hearing stories about the best ways to use bananas in the baking of cakes and how the numerous ecosystems inside their new home responded to being completely cut off from the outside world.

It’s the controversial stuff that doesn’t get analyzed as in-depth as I would have liked. The time when a crew member cut off part of their finger and was allowed to exit and then subsequently re-enter Biosphere 2. The ethics of allowing them to bring in machine parts that could help alleviate some of the group’s unforeseen technical difficulties. The point where everyone came to realize the scrubbers meant to keep CO2 levels in check weren’t working properly so outside oxygen had to be pumped into the facility to keep the crew from going out of their mind (and the experiment from being scrapped early).

Things get even more interesting after the terranauts exit Biosphere 2. The political upheaval. The financiers usurping control from Allen and his team. The introduction of Steve Bannon, of all people, into the story. It’s all mentioned. It’s all looked at. But none of it is examined in detail. It’s all a surface-level recounting of what happened, the whys and the hows all left out after the introduction of the whos, wheres and whats. It’s kind of annoying, and I kept wishing Wolf would ask an additional question or peel back more layers of this experimentally ecological onion.

I still enjoyed watching Spaceship Earth quite a bit. I loved the stuff where many of the Biosphere 2 researchers and builders (and even some of the terranauts themselves) are openly critical of the mistakes that Allen and especially his public relations team made once the doors on the facility were sealed. I also thrilled to the previously mentioned archival footage, especially the stuff inside the giant enclosure itself. Most of all, the film adds an intriguing dimension to ideas of self-isolation and the ways humans respond to confinement in the face of ecological disaster, pondering questions like these feeling fairly appropriate when considering current events. 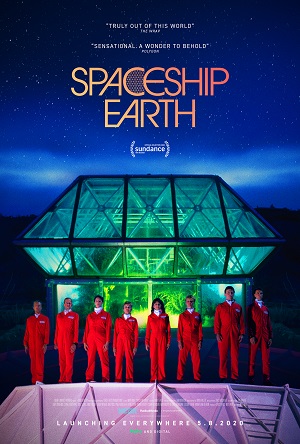