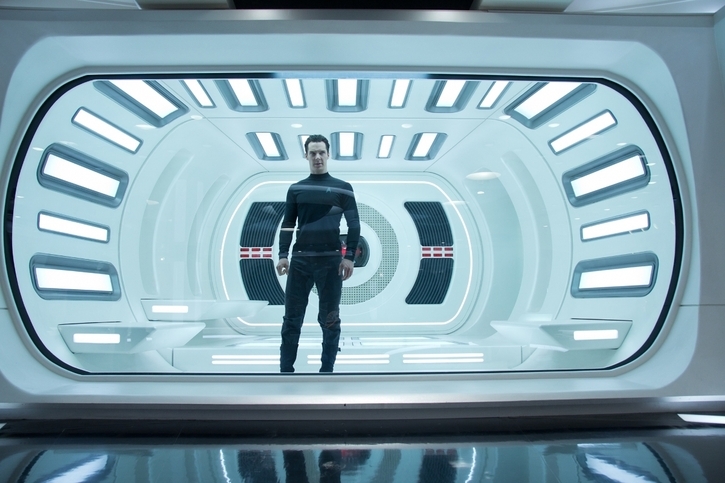 It can safely be said that, up to this point at least, no movie in all of 2013 has made me angrier that Star Trek Into Darkness. Not because it was bad. Not because it was inept. Not because it failed to entertain. Not because it was some sort of gigantic misfire that belittled my intelligence and got me to wondering why I go to movies and review them in the first place. None of that, more or less, applies, as for a good two-thirds I was, relatively speaking, happy as a purring Tribble, accepting what J.J. Abrams (Super 8) and his gaggle of writers had done to Gene Roddenberry’s source material and universe eager to find out where this particularly story would end. 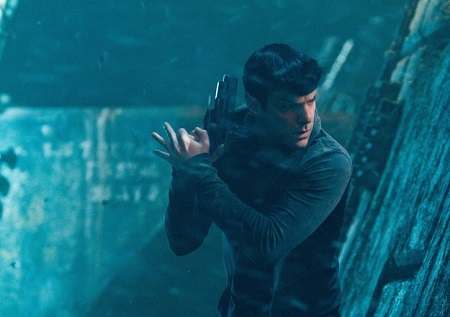 It is that ending that got my dander to rise. It’s one of the worst kept secrets in Hollywood, but as Paramount has gone to such great lengths to keep a certain twist relatively close to their vest I’m going to try and do my best not to reveal it here. That said, the one thing I did not want Abrams, returning 2009 Star Trek writers Roberto Orci and Alex Kurtzman, along with Prometheus scribe Damon Lindelof, to do the quartet actually decide to bring to the screen, unleashing a major player from the mythology’s past to prey upon the fears of the crew of the starship Enterprise while also bringing his battle to the Federation as a whole.

Thing is, they actually do it in a way that works. Using the restructured timeline engineered by the last film, Captain Kirk (Chris Pine), his Vulcan First Officer Spock (Zachary Quinto) and the rest of their gang, which this time also includes Dr. Carol Marcus (Alice Eve), a rather important figure in Star Trek lore if you’re into that sort of thing, have an extremely valid reason for engaging in this intergalactic test of will and intellect suddenly thrust upon them. It was original Spock’s (Leonard Nimoy) appearance that gave Federation leader Admiral Marcus (Peter Weller) the impetus for deep space exploration, to find out what was out there they might not know about and craft safeguards to keep Earth and the fellow planets they were aligned with safe. It was thanks to these journeys he came to know secretive Federation officer John Harrison (Benedict Cumberbatch), their relationship the one that will entangle the crew of the Enterprise in a fight both unexpected yet completely preordained.

Fine. Good. I’m okay with this. For a minute there, I got the feeling Abrams and company were going to satiate my initial misgivings, maybe even do some serious reinvention of an important genre-based cinematic figure on the level of what Christopher Nolan and his team did with The Joker in The Dark Knight. But sadly, almost unavoidably, with what feels of zero hesitation and, maybe even worse, outright glee, the team doesn’t just pay homage to what has happened before, but begin to copy it with an exuberant relish bordering on nonsensical. It is as if the writers are willfully calling attention to just how cute they are, how smart they’re being, that they are winking to the audience in a way that makes its seems like they are wearing their innate cleverness on their chests like a badge of honor.

Problem is, after so much build up, after a great introduction to the possibilities of doing something fresh and original with characters many of us might think have done it all, the movie doesn’t just drop the ball it pops it with a bobby pin leaving its shriveled and lifeless husk out on the playing field like bits of discarded garbage. The last third of the movie is an insult, having characters do things, not because they need to, but more because having them do it just calls more attention to the fact the filmmakers are repeating in their own mirror-world way what has already happened before.

Granted, it’s bigger, it’s louder, the special effects are more opulent and final showdowns can’t be handled via monologue when fisticuffs aboard a speeding vehicle careening through the skies of futuristic San Francisco are to be had. But that doesn’t mean any of it works. Worse, it belittles everything that has come before, stripping Kirk, Spock, Uhara (Zoe Saldana), who for some strange reason finds herself stuck right in the middle of all this mindless chaos, Scotty (Simon Pegg), Bones (Karl Urban) and all the rest of their collective resolve and camaraderie which has always been a staple of Star Trek no matter what its incarnation for 40-plus years.

Pity, because for a good portion of Star Trek Into Darkness I was more than willing to go wherever it was Abrams decided to take me. Sure the action histrionics can get silly, and the fact the movie feels the need to drop what it’s doing every few minutes to engage in some sort of accelerated special effects heavy sequences of mayhem or madness can grow tiresome, but the central story itself still manages to work, and as I was in 2009 I was more than happy to see this group at the helm of the Enterprise. Pine and Quinto have excellent chemistry, and watching their relationship slowly evolve into the ironclad friendship those who grew up with the original cast knew and loved is certainly a treat. Additionally, the plot has some modern day relevance to it, the notions of what actually is a terrorist and what are the ethical and moral responses to terrorist-based acts debates and discussions worthy of engagement.

More than that, the two newcomers to the series are both terrific. Eve makes the most of Dr. Marcus, conveying her intellect with a feral ferocity I happily applaud. More than that, however, she manages to open up just enough to get us to understand what Kirk might one day see within the scientist, the seeds of a romance planted even if this isn’t the movie to have them begin to blossom. 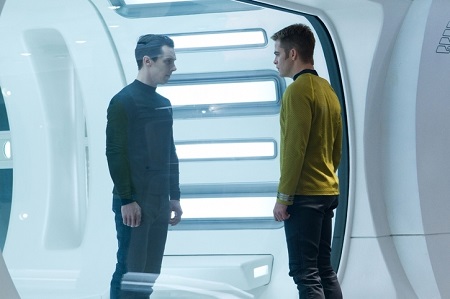 Then there is Cumberbatch. He’s awesome; there really isn’t any other way to phrase it. He tackles this character with complex relish, milking his nuances for all its worth without resorting to tricks or ticks that would make one think he’s impersonating what another actor might have done in the past. Like Heath Ledger in The Dark Knight, Cumberbatch goes for the gold, doesn’t hold back, the actor unafraid to take his character to some pretty dark and unforgivable locales while at the same time making his loss and his hurt something the audience cannot help but have an emotional connection to.

For me, though, all that good stuff is wasted. The final act is such a futile waste, such a spectacular letdown, just thinking about it again has already begun to get my blood boiling and my temper on the verge an explosion. While I do not think the majority of viewers will be as upset as I, especially if they came to the series only through the last adventure, that doesn’t make the innate laziness of the screenwriting and the execution of the final pieces any less excusable. Star Trek Into Darkness could have shown that the course the Enterprise was now on was the correct one, got us excited and eager to see what other adventures might be in store for her crew. Instead the opposite has sadly occurred, and for all the strengths Abrams’ version of Roddenberry’s universe might possess a sense of purpose or a coherent reason for being sadly are not among them. 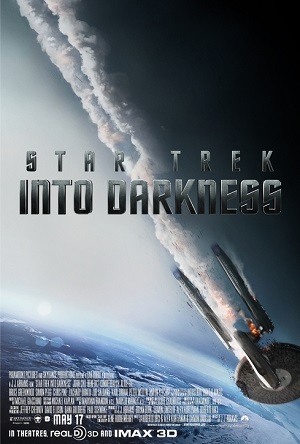