At their wit’s end, Kinsey’s (Bailee Madison) frazzled parents Cindy (Christina Hendricks) and Mike (Martin Henderson) make the difficult decision to send their angry, antisocial daughter to a strict boarding school. Wanting to spend as much time as a family together as they can before the new term begins, the entire family, including eldest son Luke (Lewis Pullman), all pile into the SUV to head upstate. They’re going to spend the following day at a secluded trailer park that’s usually only full during the tourist-heavy summer season, so the fact no one is around when they arrive late in the evening is hardly surprising. 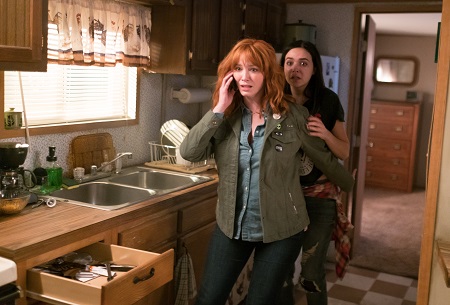 But they’re not alone. Three strangers wearing masks are also at the park, and they are going to play a little game with Kinsey and her family. The object? Survive the night, as these three nameless, faceless assailants plan to hunt all four of them down, one by one, Kinsey, her brother and their parents are dead.

The Strangers: Prey at Night is something of a pseudo-sequel to 2008’s cult favorite horror film The Strangers. Taking over the reins from original writer/director Bryan Bertino (who returns as a co-writer alongside The Forest scribe Ben Ketai), 47 Meters Down filmmaker Johannes Roberts crafts an eerie, unsettling mood that grows increasingly suspenseful as the violence escalates and Kinsey and her family begin to run out of options. He crafts a slick, retro-style thriller that recalls the early days of Tobe Hooper, Wes Craven and John Carpenter, and building tension with a stripped-down efficiency that’s in no small part due in large part to cinematographer Ryan Samul’s (We Are What We Are) electrifying camerawork. It’s a solid variation on scare tactics utilized so magnificently in Bertino’s original film, and as such this new escapade featuring the bloody handiwork of Dollface, Pinup and The Man in the Mask is surprisingly easy to enjoy.

Not that this sequel is as effective as that 2008 shocker was. Thanks to the home invasion concept, Bertino’s original took place in such a confined space the fact neither of that film’s protagonists found an easy way to escape their torment was easy to believe. By opening things up, by having an entire trailer park as the setting, it isn’t always plausible that the three masked killers are able to stay one step ahead of their prey with such apparent insight and ease. As secluded and as empty as it might be, it’s just too large an environment not to think that someone in Kinsey’s family wouldn’t find a way to escape and bring back some form of help, and as such the suspense factor is brought down substantially because of this.

Thankfully, because Bertino and Ketai put so much emphasis on crafting three-dimensional characters, because Kinsey, Cindy, Mike and Luke are all collectively flawed, each wanting to do what’s best for the entire family even if they don’t always know how to do it, caring about their collective fate still happens immediately. I was invested in their survival, so when death came calling it did so with devastating impact. Roberts manages to make each moment matter, each cut, bruise and injury feeling increasingly catastrophic, and when members of the family due succumb to their assailants (as they must, this is a horror movie after all), the pain the survivors feel is breathlessly palpable.

It also helps that the filmmaker is fond of long, extended takes of brooding menace that allows the idea that danger and death could be lurking in every corner of the frame to be omnipresent once the carnage begins. Roberts is also not especially prone to utilizing jump scares, the ones that do exist coming from a place of narrative and of character which increases their effectiveness considerably. Best of all is his use of sound. The bumps in the night. The whispers of the wind. The echoes of soft footsteps shuffling along the asphalt. An axe scraping against the concrete. All of it matters in ways that are sinister in their insidious malevolence, my heart palpitating continuously in earnest anxiety for the entire length of the film’s climactic act. 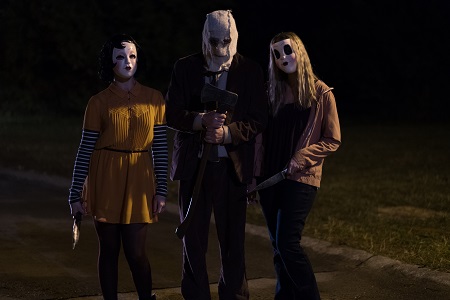 There are a number of little things that did annoy me. Adrian Johnston’s (I Am Not a Serial Killer) electronic score, reminiscent of John  Carpenter’s classic compositions for Assault on Precinct 13 and Escape from New York, is terrific, but it is also frequently undercut by a number of 1980s pop songs, the film oddly inserting them at a number of inopportune moments diluting the inherent tension of the situation substantially. It should also be said that, unlike the original thriller, the plausibility factor is decidedly low. More, it decreases exponentially the longer this deadly game of cat and mouse continues, and as mentioned earlier there were a number of moments where I felt Kinsey or her brother could have escaped their attackers and gone after help with relative ease.

But even if this sequel isn’t the low budget, handsomely mounted modern grindhouse cult classic Bertino’s 2008 effort has over the last decade proven to be, that does not make it any less disturbingly entertaining. Roberts treats the material with intelligence and respect, allowing his actors the opportunity to craft flawed, deeply human characters who believably do everything they can to selflessly ensure their loved ones have a chance to survive the night. Make no mistake, The Strangers: Prey at Night got under my skin, and for that fact alone I do think horror aficionados should make the time to give long in coming follow-up a look. 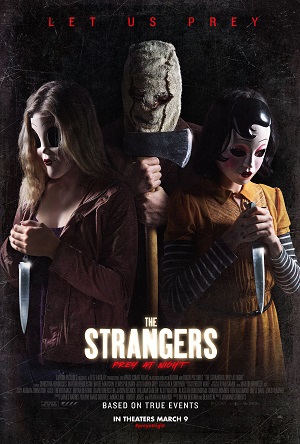