Assigned to protect the beautiful daughter of a wealthy businessman, Afghan War veteran Matt (Jonathan Bennett) finds his skills tested when the tricked out limousine carrying the young woman and a number of her friends is pushed off a bridge into an estuary that leads out into the ocean. With time running short, he must find a way to get them all out of this impossible situation, knowing full well the attackers that put them in this predicament are likely lurking just above the surface of the water waiting to pounce.

“Decorated war vet Matt (Bennett) has returned home to look after his psychologically unstable younger brother Dylan (Cody Christian) after their parents’ untimely death. He is charged with protecting childhood friend Jessie (Talulah Riley) by her worried industrialist father (Tim Daley), urged to do so by father figure and mentor Hector (Mario Van Peebles), both men feeling the decorated soldier is the best man for the job. She needs shadowing because dad is the subject of a number of threats of varying concern, his latest business plans seeing over a thousand of his employees laid off, many so angry they’ll do anything to see what they perceive as justice done.

After a night on the town, Jessie is indeed the subject of a kidnapping attempt, Matt thwarting the attackers’ best efforts but in the process inadvertently driving his virtually impregnable limousine into an estuary, the hungry tides eager to drag the vehicle out into the heart of the cold, dark ocean. With his charge unconscious in the front seat with him, a group of passengers, Amanda (Rosa Salazar), Todd (Giles Matthey), Eddie (Denzel Whitaker) and Brandon (Caleb Hunt), grow increasingly hysterical as the rear of the limo slowly fills with seawater. With time running out, injured and unable to free himself from the driver’s seat, Jesse must put the pieces of this attempted abduction together while also coming up with a plan to escape the flooding car, knowing the remaining kidnappers are likely ashore ready to pounce the moment any of them show their heads above the surface of the water.

Submerged is a low budget indie B-thriller with a solid premise and a number of good ideas. On top of that, while writer Scott Milam’s (Mother’s Day) script flirts with topicality in regards to looking at how the wealthy elite treat those working for them with a callous disregard bordering on the unpardonable. But the germs of that idea are discarded early on for conventional parlor tricks and simplistic resolutions that contradict any of the points he was possibly trying to make about corporate largesse and redistribution of wealth away from the Middle Class. Additionally, he throws in a loopy flashback structure that only annoys and rarely adding any additional insight into the plight being faced by Matt and his limo’s passengers, keeping things too nondescript and ephemeral to matter as far as character development is concerned.

Yet, director/editor Steven C. Miller (Silent Night) continues to show promise, and while this moderately self-contained thriller never rises to the same heights as the filmmaker’s The Aggression Scale, a wonderful little shocker from 2012 that deserved a wider release than the one it received, it does have its moment. Miller stages a couple of crackerjack little sequences, most notably the initial kidnapping attempt that Matt uses his military skills and intellectual ingenuity to subvert. The initial sense of claustrophobia overtaking those stuck in the car is also unnervingly palpable, and while the passengers lapse into crazy hysteria awfully quick it’s just as hard for me to think most wouldn’t act at least somewhat the same if stuck in a similar predicament.

But the movie never makes enough out of its premise, the stuff on dry land exceedingly tiresome. Additionally, some of the plot mechanics are extremely lumpy. What is Matt impaled upon that has him stranded in the driver’s seat? How are the kidnappers prepared with diving equipment almost as if they knew the limo was going to go for a swim? How does a plot twist involving one of the passengers even happen considering there’s no plausible explanation for their resurrection during the bullet-riddled climax? Considering how many masked villains Matt shoots during the initial abduction attempt, just how many henchmen are working for these kidnappers? Do they grow on trees? Are they spawned out of thin are like gun-toting assassins laid waste by the likes of Chow Yun-Fat or Tony Leung in a John Woo action spectacular?

Submerged is easy to dismiss. As good as the concept might be, as strong as Bennett (best known as the object of Lindsay Lohan’s affections in Mean Girls) is as the psychologically scarred and physically injured hero, Milam’s screenplay just never finds a comfortable groove. It feels like the kind of movie that required more time to marinate, and it’s easy to imagine what could have been with a couple additional rewrites that might have focused more on the characters as well as ironed out a handful of the nonsensical wrinkles that consistently annoy. Miller has talent, a statement I have no problem making, but it’s almost as if he’s treading water here, this whole enterprise so wet behind the ears and lacking in common sense maintaining interest through to the end is practically impossible.”

I can’t say taking a second look at Submerged was difficult. It moves well enough and I still like the premise. It’s just the execution that’s lacking, director Steven C. Miller somewhat surprisingly having a difficult generating tension even with the type of plot this film offers up. The movie just doesn’t work, plain and simple, and there’s not a heck of a lot more I can add.

The only extra included with this release is the film’s Original Theatrical Trailer (2:23)

Submerged had a ton of potential, and director Steven C. Miller is undeniably talented, but for whatever reason things just didn’t come together as far as this project is concerned, the movie nothing short of a nicely cast disappointment that’s frustratingly difficult to watch all the way through until the end. From a technical standpoint, even with no extras to speak of Scream! Factory’s Blu-ray presentation is up to the company’s usual high standards, so on that front at least I have no complaints. 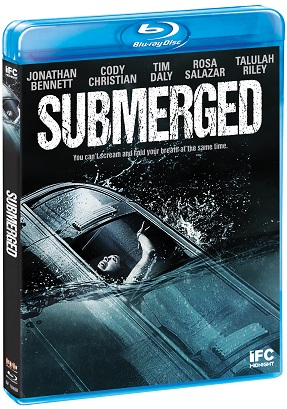