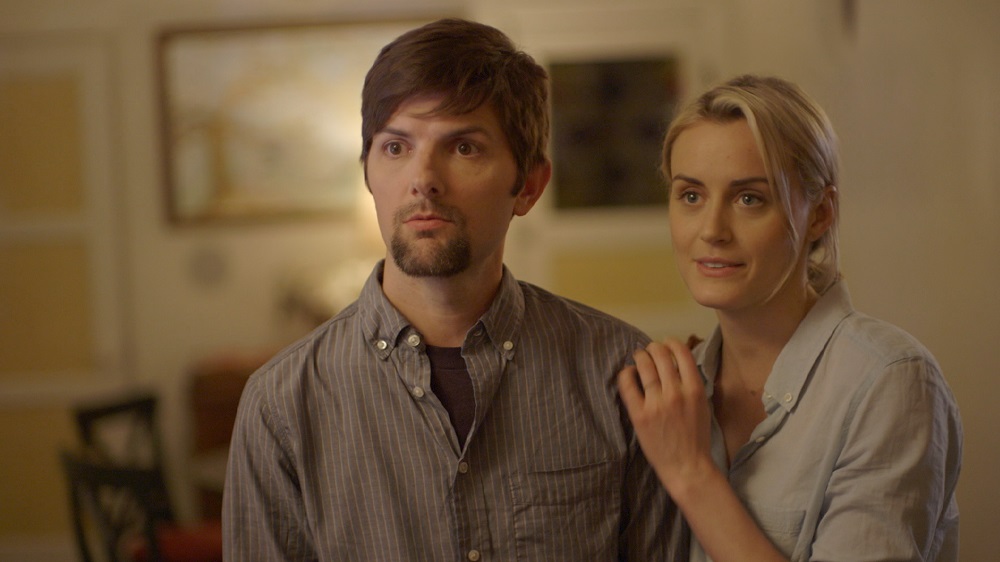 Emily (Taylor Schilling) and Alex (Adam Scott) have just relocated from Seattle to Los Angeles with their young son RJ (R.J. Hermes). Meeting the friendly Kurt (Jason Schwartzman) at a local park where he’s watching his own son Max (Max Moritt), the California newbies are quick to accept an invitation to his home for a small-scale welcome to the neighborhood dinner. Once there, and after the kids have gone to bed, Emily and Alex are persuaded by this smooth-talking hipster and his beautiful French wife Charlotte (Judith Godrèche) to spend the rest of the evening engaging in a different kind of fun, something decidedly more adult in nature. 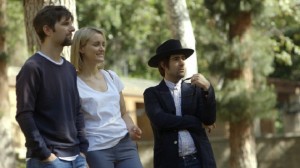 The Overnight, the latest off-center, not as straightforward as you might initially think low budget independent effort from Creep maestro Patrick Brice, is a remarkably silly adult sex comedy that goes to some pretty dark places once all is ultimately said and done. What’s interesting is that, as crazy as that destination might be, as thought-provoking as elements might become, it’s the stuff that happens long before the denouement that gives this Sundance and Seattle International Film Festival favorite its memorable staying power.

What I mean by that is, for all its thirty-something bourgeois middle class sensibilities, for as ribald and as sensationalistic as things might eventually become, none of it would matter if the interior road map both Emily and Alex follow to get there wasn’t worth walking on right alongside next to them. Additionally, it also goes to say that if Schilling and Scott weren’t up to the challenge none of what transpires would matter, it incumbent upon them both to make the transitions, recriminations and  various attractions that take place throughout feel as organic and as believable as possible.

Thankfully they’re superb, both delivering beautifully layered, nicely organic performances that run the emotional, physical and sexual gamut with dexterous glee. They are the heart and the soul of the picture, the engine Brice confidently allows things to be powered by, each of them going places that are continually of interest yet also, and somewhat oddlyfeel entirely natural once they get there. They do glorious work, both of them, working together in harmonious, give-and-take fashion that’s one part Tracy/Hepburn, another Taylor/Burton and a final piece Abbott/Costello. They’re so good I’d love to see them work together again, change gears into something more tightly scripted and less whimsically pieced together, the duo showing a chemistry that could blossom into something magical if allowed to develop in future cinematic endeavors.

That’s probably overstating things, especially considering just how slight and how obvious The Overnight finally becomes, but that doesn’t mean I think either Schilling or Scott are any less impressive. Mix the sarcastically self-effacing Schwartzman into the mix and by and large you have comedy gold, and there are moments, especially right after RJ and Max are gone and the real festivities begin, where I hadn’t the first clue what was going to come out of the actor’s mouth next.

Apparently the majority of the film was adlibbed during filming, the cast given the outline of what was going to happen and when, Brice both guiding them where it was he wanted the quartet to go while also making sure cinematographer John Guleserian’s (Breathe In)camera was there to catch all the shenanigans. The only weak link amongst the group is Godrèche who just doesn’t look entirely comfortable trying to make sense of all that’s happening (which says something considering she’s one of the two primary instigators). Still, overall the group is pretty terrific together, and it’s hard not to imagine they had a blast on the set trying to make things feel more realistic and natural than it by all accounts would be if any of this were taking place for real.

That is the rub, of course. As confined and character-driven as all of this might end up being, the central conceit is just too broadly lewd and hedonistically fanciful to be entirely believed. Yet Brice, much like he did with the found-footage shocker Creep (currently playing OnDemand as we speak), manages to make the unimaginable feel authentic, finding easygoing, interpersonal rhythms that connect one person to the next with comforting ease. The Overnight isn’t a groundbreaking comedy, but it is a funny one, and thanks to Schilling and Scott I’m probably going to be pondering its various nuances far longer than I otherwise would have had they not been willing to engage in this promiscuously adventures affair with such passionate dynamism. 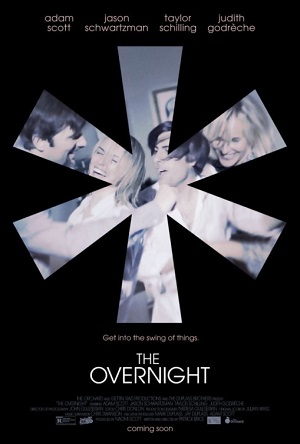