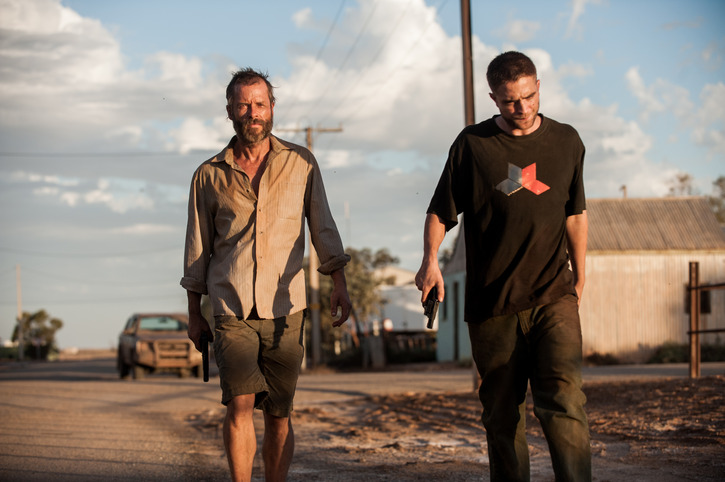 It’s been ten years since the collapse. A grizzled man (Guy Pearce) lives in the middle of the Australian outback alone and without any ties, looking to the world as a walking corpse going through the motions of pretending to still be alive. After a trio of bruised and battered men (Scoot McNairy, David Field, Tawanda Manyimo) steal his car, this nondescript loner takes it upon himself to track them down and get it back. He is aided in his pursuit by Rey (Robert Pattinson), the brother of one of the fleeing men, unceremoniously left for dead after he was mysteriously shot. They don’t so much strike up a friendship as they do a partnership, each gaining something from the other they never would have obtained otherwise.

Thus begins writer/director David Michôd’s gripping The Rover,  a mesmerizing, minimalist Australian thriller that shows the up and coming filmmaker is much more than a one-trick Animal Kingdom pony. In point of fact, if Peter Weir, George Miller and Walter Hill (an American director, yes, but his influence is felt on every reel all the same) could be combined into a single human being, it is likely this is the type of film they probably would have made. The movie might be nondescript, it might not be much for explaining every little thing that’s happening, but that doesn’t make it an ounce less powerful, the coldly passionate maelstrom swirling at the center of all the histrionics as devastating as it is fascinating.

Michôd isn’t afraid of silence. He uses images, musical choices, the inherent power of certain situations and the dual performances of his two main stars to speak for themselves without additional indulgences on his part. The director sets the scene and then lets things rip, and while the film is clearly under his control he’s not above certain stylistic flourishes at the exact same time. There isn’t any facet that doesn’t feel completely and entirely by design, even the climactic outcomes, as overblown and as startling as they might be, having a lived-in, utterly organic feel to them giving them an indescribable power to emotionally obliterate.

Pattinson proves once again the Twilight series should not be a proper gauge for the individual talents of the actors who all played major roles within it. He’s a little showy at times, not fully grasping and engaging in all of his character’s intimate details, but overall the one-time undead heartthrob does a magnificent job making Rey tick. His mental imbalances, the way he looks at life, all of it comes together nicely, leading to stunning conclusion between him and McNairy facing one another, each trying to make sense of the events that have disastrously reunited them. 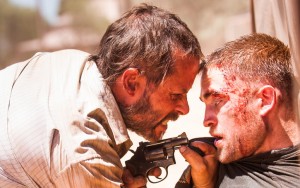 But this is Pearce’s show, make no mistake, and he makes another case that he’s without a doubt one of the most multifaceted, and underrated, major actors working today. He does so much with so little, making our nameless – referred to in the credits as Eric but a name never given voice to inside the film itself – wanderer a complete character with breathtakingly little effort. His pain is palpable, his history shockingly easy to define, and while his choices at first seem oddly nondescript as things evolve it becomes increasingly clear why his obsessions are the way they are. Pearce anchors every scene with powerful, magnetic authority, his fury, his rage, all of it having an undercurrent of unbearable catastrophe linked to it that grabs hold with vice-like intensity.

The reasons behind the world’s collapse, why exactly Australia has transformed into a somewhat Mad Max-style existential wasteland, none of that matters as far as the grand scheme of things are concerned. What does is that Michôd makes the world his two main characters are traveling feel realistic, that there are never any questions as to why people act the way they do and react to situations in such varying, oftentimes violent, degrees. Even the surprising, out of left field moments don’t feel near as shocking in retrospect as they do in their initial moment when the whole is taken in context, giving the movie a breadth and a scope going well beyond its simplistic scenario.

I wasn’t the biggest cheerleader for Animal Kingdom. I had multiple problems with the film’s tiredly familiar narrative, and as solid as the craftsmanship was, and as wonderful as the majority of the performances were, the movie itself didn’t do a heck of a lot for me. Not so with The Rover. Michôd improves upon all the plusses that were on display in his previous effort and erases almost all of the negatives, and while this film isn’t all that more original than his last one was it feels like it is, which in the end is really all that matters. This is a seriously great motion picture, one I’m certain I’m going to be ruminating over for some time to come. 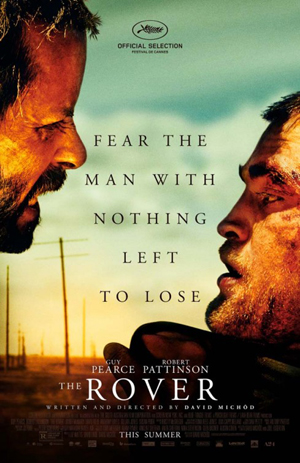