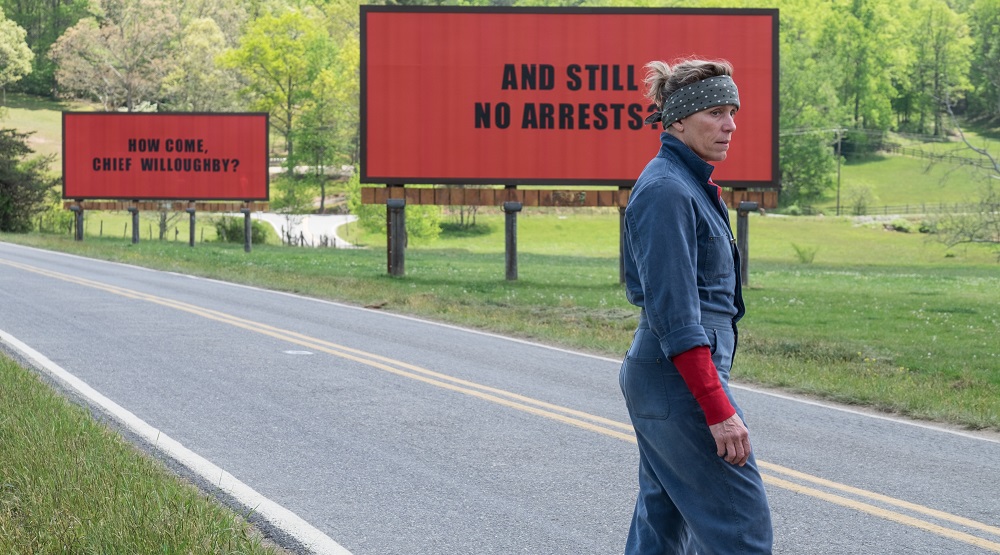 On an old stretch of road just outside of Ebbing, Missouri, Mildred Hayes (Frances McDormand) rents out three billboards in order to put up a pointed message directed at town chief of police William Willoughby (Woody Harrelson). It’s been almost a year, and the lawman is nowhere near close to catching the person who brutally raped and murdered her daughter, the perpetrator leaving the teen’s burned body at the base of one of those billboards.

Her son Robbie (Lucas Hedges) doesn’t know what to think. He’s grieving just as hard as his mother is, but now he has more to deal with thanks to this particular stunt putting the case back into the spotlight. As for Willoughby’s pool of officers, his second-in-command Officer Dixon (Sam Rockwell) appears to be the most aggrieved, the volatile policeman choosing to take out his aggressions upon the sign company manager, Red Welby (Caleb Landry Jones), who rented out the billboards. Nonetheless, Mildred remains resolute. She is leaving the signs as they are, and even when Willoughby reveals a dreadful personal secret, as much as she feels and understands his pain taking them down simply isn’t an option.

The great Frances McDormand delivers one of the best performances of the year in writer/director Martin McDonagh’s masterfully desolate Three Billboards Outside Ebbing, Missouri, while both Harrelson and especially Rockwell turn in two of the finest of their respective careers. The rest of the cast, which includes the likes of Hedges, Jones, Abbie Cornish, Zeljko Ivanek, Peter Dinklage, John Hawkes, Clarke Peters and Samara Weaving, are equally outstanding, and whether their parts are big, small or lie somewhere delicately in-between, each of them makes the most of every second that McDonagh chooses to focus on their respective characters.

The film itself is as twisted and as destructive as one might expect from a story sprung from the mind of the creator of motion pictures like In Bruges and Seven Psychopaths. Mildred’s story is an ocean of grief, the anger that’s been brewing within her for months on end taking her to a place of unfettered rage that is as unrelenting as it is understandable. Yet, she is not the only one with cause to lash out. Willoughby has his own reasons to scream in anger, as does his wife, Anne (Cornish). As for Dixon, he’s a mess of contradictions, his frustrating inability to separate right from left, to quickly judge every book solely by its cover and not to care a single lick about the consequences, all if it is going to bite him in the butt, the fact he doesn’t notice this before it’s too late a whole extra level of cluelessness that’s flabbergasting in its self-destructive absurdity.

Robbie might have the most reason to be angry, what with his father (Hawkes) leaving to live with a much younger woman (Weaving) while his mother sends the entire town of Ebbing into a freewheeling spiral of pointed fingers, shouted insults and a number of shattered windows. He lost an older sister whom he loved dearly, and now, just as he was starting to regain his emotional footing, everything is now back on the front page but in a way that makes his family look foolish, and as such he’s having a hard time trying to figure out how he’s supposed to feel about it all.

McDonagh crafts a bevy of complex characters, each with their own idiosyncratic ins and outs. Each is wounded in one way or another. Most are trying to get on with their lives as best they can. A few are so caught up in their own anger or grief, or more often than not a combination of the two, that they end up making choices that frequently turn out to be as misbegotten and cancerous as they are stupid. But their actions also speak truth to power. They call into question societal norms and priorities that deserve to be addressed. Most of all, they allow a level of introspection that could lead to profound change if the person experiencing these varying emotions is willing to confront them head-on. Problem is, most either aren’t willing or don’t know how to do something like that, and so their growing rage keeps building until an eruption of one sort of another is nothing short of inevitable.

McDormand is a force of nature. Her unbending resolve is something out of a John Wayne Western. The actress is a rigidly inflexible dynamo of determination, Mildred so intent on seeing something, anything done as it pertains to her daughter’s unsolved murder that she is okay with the collateral damage that might occur due to her actions. Yet McDormand is able to mine such a knotty multitude of emotions keeping track of all she is showcasing one scene to the next is practically impossible on the first viewing, the sheer brilliance of her work never in doubt for one second of the film’s running time. 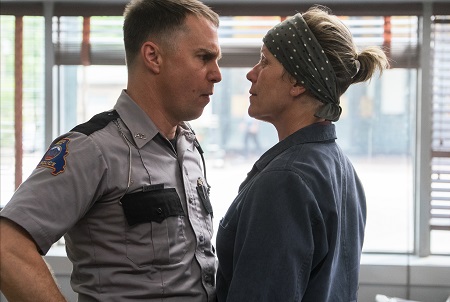 Unfortunately, McDonagh isn’t always able to maintain command of the proceedings all the way through to the end. There are sections where he attempts to touch upon hot-button issues like police misconduct and racial inequality but none of this is ever fully developed. There are times that, as magnificent as Dixon’s character arc proves to be, the fact the film seems to dismiss certain charges brought against him is slightly uncomforting. More, other than Peters’s incoming chief of police tasked with taking charge of the officers under Willoughby’s command, most of the actors of color (notably Brendan Sexton III and Amanda Warren) have virtually nothing to do, all of them disappearing for long narrative stretches as if McDonagh can’t figure out the best way to utilize any of them.

But when this drama connects it does so marvelously. The last 30 minutes are close to perfect, the narrative bobbing and weaving in increasingly insightful and fascinating ways that surprise and amaze. The way things come together is entirely unexpected, the climactic revelations a devastating punch to the gut. What Mildred and Dixon achieve isn’t redemption, the answers to their various questions not meeting with the sort of answer either are looking for. But a form of catharsis is found, a common goal seeing the duo join forces in a way they never would have dreamt possible at any point before it actually ends up happening. Three Billboards Outside Ebbing, Missouri knocked me sideways, McDonagh’s latest a mesmerizing piece of satirical social commentary that packs a mean wallop. 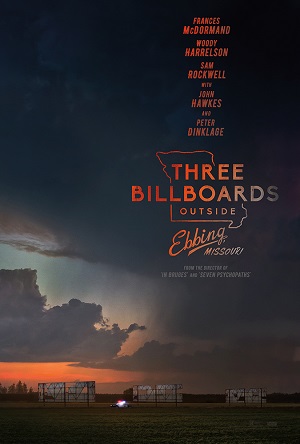