Teenage Mutant Ninja Turtles: Out of the Shadows (2016)

There’s no point my trying to review Teenage Mutant Ninja Turtles: Out of the Shadows. I’ve never been much of a fan of the characters created by Peter Laird and Kevin Eastman. I never understood the passion for the cartoon series (no matter which incarnation we are talking about). I couldn’t for the life of me figure out how the 1990 movie became a hit. I have no idea how it spawned two sequels and a CGI animated spinoff. And, while instantly forgettable and not nearly as terrible as it could have been, I can’t say I cared for 2014’s hit cinematic reboot of the series starring Megan Fox as newscaster April O’Neil and produced by Transformers maestro Michael Bay. All-in-all, this has never proven to be a series I’ve shown an ounce of affinity for, so my not liking this latest sequel is hardly a thing that could be considered even slightly a surprise.

But Out of the Shadows is terrible, amazingly so, almost equaling 1991’s Teenage Mutant Ninja Turtles II: The Secret of the Ooze as far as levels of absurdly annoying awfulness are concerned. Returning screenwriters Josh Appelbaum and André Nemec (Mission: Impossible – Ghost Protocol) throw in the cartoon towel as far as all of this nonsense is concerned, utilizing every fan-favorite item they can think of including buffoonish henchmen Bebop (Gary Anthony Williams), a warthog, and Rocksteady (Sheamus), a Rhino, hockey stick-wielding vigilante Casey Jones (Stephen Amell), here re-imagined as a disgraced police officer trying to redeem himself, and interstellar world-conquering dimension hopper Commander Krang (voiced by Brad Garrett). It’s all here, including the return of the murderous Shredder (Brian Tee) and the arrival of egotistical genetic scientist Baxter Stockman (Tyler Perry), the two madmen joining forces to enact an evil plan that could spell doom for all of New York City.

And what is that plan? Seriously, I don’t have the first clue. Through a nonsensical plot device Commander Krang starts Shredder and Stockman down their path of world domination, the pair needing three otherworldly devices in order to build a machine that will allow them access to power beyond imagining. Only the turtles, Leonardo (Pete Ploszek), Donatello (Jeremy Howard), Raphael (Alan Ritchson) and Michelangelo (Noel Fisher), can stop them, especially after Bebop and Rocksteady are mutated into new animalistic forms. They are aided by O’Neil, Jones and TV cameraman turned Big Apple celebrity Vernon Fenwick (Will Arnett), while hard-boiled New Yorker Chief Vincent (Laura Linney) is forced to put her worries and fears aside and trust a quartet of reptilian teenage ninjas to save her city before disaster strikes.

I’m not going to judge anyone’s acting. I’m not going to say much about the plot other than it’s all as absurd and as nonsensical as it sounds. I will say director Dave Green (Earth to Echo) channels his inner Michael Bay and this isn’t a compliment, allowing his trio of editors Bob Ducsay (Godzilla), Jim May (Non-Stop) and Debra Neil-Fisher (The Hangover) to cut things so hyperactively the majority of the action sequences becoming nothing short of a headache-inducing blur. I’ll also say the script has dumbed things down to such a colossal extent it’s like Appelbaum and Nemec are aiming to please eight-year-old kids and practically no one else, the cartoonish idiocy of all of this more suited to any number of Nickelodeon cartoons and just about nothing else.

But these turtles have their fans, passionate ones, and I fully grasp that this is one sequel that is designed almost exclusively with them in mind. None of which makes watching Teenage Mutant Ninja Turtles: Out of the Shadows any less painful for yours truly, and while I’m open to keep giving these films the benefit of the doubt, after 25-plus years of doing so I’m starting to think it’s possible all I’ve been doing is wasting one heck of a lot of time. 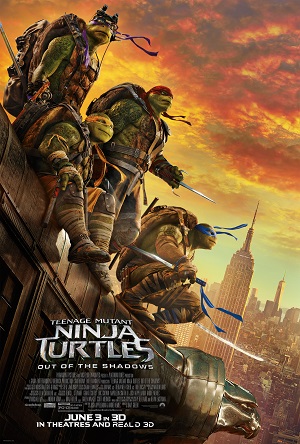