Michael Atwood (Chiwetel Ejiofor) is a great thief under the thumb of an evil woman, Irina Vlaslov (Kate Winslet), the merciless wife of a Russian mob boss who will do anything she can to see her husband freed from prison. She tasks his crew to steal a piece of evidence out from under the nose of Homeland Security, the Atlanta office happening to hold an especially valuable cache of computer files she needs right away. In order to make sure her main man knows she means business, Irina sends a lethal message, Michael assembling his compatriots to let them know they either pull off the impossible or meet with certain, bloody death. 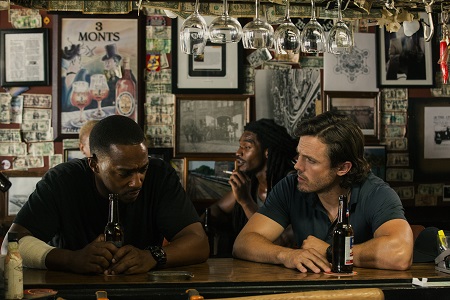 Two members of his unit, Jorge Rodriguez (Clifton Collins Jr.) and Marcus Belmont (Anthony Mackie), are trusted members of the Atlanta police force, dirty cops who none suspect of padding their incomes working for Michael. The other, Gabe Welch (Aaron Paul), is a former officer, discharged from duty after succumbing to a particularly nasty drug addiction. Together, the group began to piece together a plan, one which sits well with none of them but all know might be the only way to successfully pull off this heist. They’re going to kill a cop, Marcus’ new partner, Chris Allen (Casey Affleck), and in doing so create the kind of chaos that will allow them to waltz in and out of the government agency as if they were never there at all.

There’s a lot going on in John Hillcoat’s (Lawless, The Proposition) aggressively macho thriller Triple 9, the star-studded ensemble cast pulling out all the stops as they navigate their way through newcomer Matt Cook’s labyrinthine script. An equal mix of Michael Mann’s Heat, Quentin Tarantino’s Reservoir Dogs, Fritz Lang’s The Big Heat, Dennis Hopper’s Colors, Martin Scorsese’s The Departed and John Huston’s The Asphalt Jungle, the movie overflows in visceral style and emotionally bleak melodramatic fervor, the threat of destruction hovering over all involved like a razor-sharp guillotine waiting to fall.

The initial bank robbery involving Michael and his men is sensationally staged, and while nothing that transpires comes as a surprise Hillcoat orchestrates things with a kinetic ferocity that’s immersive and palpable. Ejiofor is excellent during this sequence, as is “The Walking Dead” star Norman Reedus as his partner Russel, the pair sharing an instantly authentic connection that goes beyond friendship right into the bonds of unbreakable brotherhood. This sequence plant seeds hinting that the film will quickly grow into greatness, a number of the follow-up moments cementing this impression beautifully.

If only all of this had come to pass. Truth be told, while Hillcoat paints an agreeably beguiling picture, he’s just as equally put one to canvass lacking in anything approaching depth or nuance. This is a one-dimensional affair from start to finish, every character an archetype of one sort or another, few of them given the opportunity to add additional shades or layers that would have made them anything more than what they initially appear. On top of that, the film’s most important figure is treated with so much disrespect and ignominy it’s practically unforgivable, an odd, off-putting turn of events that left me understandably perplexed.

There’s just not enough in the way of time for things to flesh themselves out as necessary. Marcus and Chris’ relationship isn’t developed. Gabe comes across as more of a foppish fool than a tragic rube sloppily trying to shuffle his way to redemption. Jorge is an obvious piece of a Machiavellian ambiguity waiting to pounce like a rabid alley cat toying with an emaciated street mouse. Teresa Palmer and Gal Gadot are wasted in female roles that feel like they were inserted into the proceedings straight out of the 1940s, the pair of them so underutilized they might as well as have signs around their necks saying, “token female sex objects,” as they add little substantive to the proceedings. 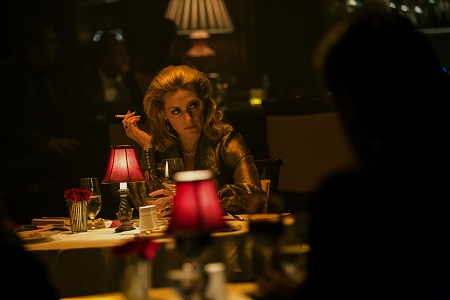 But Ejiofor is terrific, while Winslet oozes a type of patient demonic cruelty that’s undeniably unsettling. Affleck, Mackie and Collins Jr. are also all excellent, each going above and beyond as they do all that is asked of them and more as they attempt to give the depicted events additional levels of emotional significance. Best of all is Woody Harrelson as Sergeant Detective Jeffrey Allen, his drug-fueled mania as he tries to assemble the pieces of the puzzle into a cohesive whole a captivating descent into intellectual genius and physical madness beyond spellbinding.

Hillcoat remains a director on the rise, and there’s nothing about Triple 9 that makes me question that assessment. But the movie never realizes its inherent potential, riffing too much inside the world of genre classics that came before it rarely charting a course that could even slightly be considered original. As for the final 20 minutes, they are a sudden burst of sound and fury signifying precious little of significance, pushing the thriller towards a frustrating final flurry of events that are as disappointing as they are unhappily inconsequential. 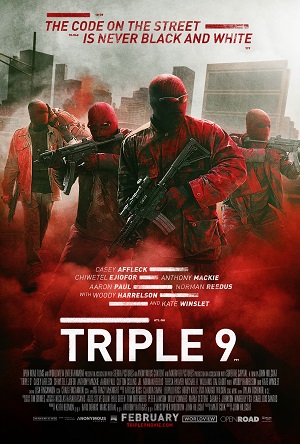