Turbo (voiced by Ryan Reynolds), otherwise known as Theo to his well-meaning, mild-mannered brother Chet (Paul Giamatti), is a run-of-the-mill garden snail who dreams of living life in the fast lane. Literally. He’s obsessed with NASCAR and Indy racing. He idolizes Indy 500 champion Guy Gagné (Bill Hader). He has his own 36-inch long custom ‘track’ he trains on nightly (personal best of 17 minutes). In other words, his ambitions are lofty, and not exactly typical for a minuscule mollusk.

Through a series of events too crazy to recount, Turbo finds himself bathed in a sea of NOS granting him unbelievable super powers the likes of which no one would ever believe. No one, that is, save kind-hearted Tito (Michael Peña). Working in a rundown Los Angeles strip mall, the outgoing taco truck driver comes up with an incredible plan to save the dilapidated businesses of his friends and make his wunderkind Mexican chef older brother Angelo (Luis Guzmán) a star. He’s going to enter Turbo in the Indy 500, the incredibly fast super snail sure to be a sensation that will make his dreams, as well as all those he cares about, come instantly true.

So, yeah, it kind of goes without saying that the new DreamWorks animated adventure Turbo, written by Darren Lemke (Jack the Giant Slayer), Robert D. Siegel (The Wrestler) and David Soren, the latter of whom also directs, isn’t exactly plausible. It’s a fantastical tale that stretches plausibility past its breaking point, requiring such a gigantic leap of faith it’s safe to say there will be plenty of audience members unwilling or unable to accept anything that happens within the confines of the story being told. Even for CG animated kids fare this has a premise that had me rolling my eyes long before I entered the theatre, the obnoxious and overbearing trailers certainly not going far to convince me I had anything of merit to be looking forward to seeing.

I love it when I’m wrong, when a film such as this, doesn’t just surprise me, but at times even goes so far as to wow. Truth is, while Turbo has its problems, while it’s far from perfect, while the sight of a snail racing against actual Indy motor cars is as farfetched as anything I’ve laid eyes on this summer (and that includes Kaijus and Jaegers battling it out in Hong Kong, Johnny Depp with a crow on his head and Zachary Quinto doing his best William Shatner impersonation), the movie is nonetheless a good one, at times even very good. By keeping things simple, while staying true to its central cadre of characters (namely Turbo, Chet and Tito), by allowing things to go quiet, be subtle and let the inherent emotional potency of the story speak for itself, I ended up finding much to enjoy, walking out of the theatre far happier and in much better spirits than I anticipated before walking in.

It helps that the two dueling brothers subplots are handled with restrained authenticity, Tito and Angelo’s interactions and conversations almost every bit as important as the ones taking place between Turbo and Chet. There are wise words spoken, brave ideas broached and wondrous dreams of friendship, camaraderie and familial bonding aspired to. While there are some acts of brazen selfishness, even those are framed from a place of love and understanding, the ones taking the leap doing so not just for themselves but also for those they care deepest about. Great life lessons can be drawn from all that transpires, the idea that being the biggest, the strongest, the prettiest or, in the end, the fastest isn’t what matters or is necessary to come out on top one I think audiences of all ages could use to be reminded of. In other words, hard work pays off, an always great axiom no matter how you slice it.

The movie can get a little obnoxious, that probably goes without saying, and while there’s some interesting vocal work turned in by the likes of Samuel L. Jackson, Snoop Dogg, Richard Jenkins, Maya Rudolph, Michelle Rodriguez, Ben Schwartz and Michael Patrick Bell I can’t say any of them have been given enough to do in order to stand out in any way that might matter. Additionally, the byplay between Turbo and  Gagné is far too predictable, and part of me would have loved it had the film flipped the switch, if only a little bit, and not turned the veteran Indy driver into a self-centered villain and kept him just the elite-level athlete he’s depicted as early on.

Weird thing is none of these are as big a problem as you might otherwise believe. The movie is so light on its feet, so narratively nimble, a lot of these missteps don’t feel as egregious or as upsetting as they otherwise might. Additionally, there are some great sight gags sprinkled throughout, not the least of which are running jokes regarding crows, while Ken Joeng of all people, an actor I fully admit to usually loathing, pops up in a supporting role so endearingly funny I almost, emphasis on the almost, I’d never actually yearn for more Ken Joeng, wished the character spent additional time on-screen. Turbo works, surprisingly so, its contest of brotherly love and understanding a warm-hearted race where those watching the spectacle end up being the biggest winners of them all. 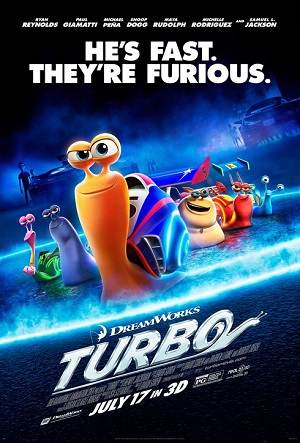