Chilling Under the Shadow an Intimately Human Thriller

When her doctor husband Iraj (Bobby Naderi) is shipped to the front lines to serve out his latest stint of required military service, former medical school student Shideh (Narges Rashidi) attempts to look after the pair’s young daughter Dorsa (Avin Manshadi) while missiles target the city. It is 1988 and the family lives in Tehran, and with the war between her country Iran and its neighbor Iraq showing no signs of letting up, maybe mother and daughter should head out to the country and stay with Iraj’s parents until he returns.

But Shideh is stubborn. She doesn’t want to rely on her in-laws. She doesn’t want to take Dorsa away from her home or school. She doesn’t care that her landlord is a fundamentalist jerk who is angry that Iraj allows his wife to drive. She doesn’t care that she has to hide her Jane Fonda tapes and do her morning workouts with the curtains closed and the volume turned down low. None of that matters to Shideh, as she is her own woman, and even if Iranian society doesn’t want her to be one, that doesn’t mean she’s not going to still do whatever she feels is necessary to stay true to her convictions and beliefs all the same.

Based on that synopsis, one would imagine that Under the Shadow is a drama about women suffering under the oppression of the Iranian Cultural Revolution, especially as it concerned the country’s eight-year war with Iraq. And this would be correct, this is what the exceedingly talented writer/director Babak Anvari’s feature-length debut is about, what it analyzes in unsettling detail. But there is an additional element to the tale, one that pushes it into territories that are as startling as they are tragic, the film ingeniously using genre tropes and tricks to push its points about female suppression and religious intolerance into a place of unforgettable genius that blew me away.

That additional element? There is something in the apartment with Shideh and Dorsa, something that is stalking the little girl with increasing rage and cruelty. Signs suggest it is a djinn, an evil spirit that has marked the youngster, an entity that would like to devour her soul. Problem is, because of the political and religious climate, Shideh can’t just grab her daughter into her arms and run into the street for help as doing so would get her arrested and likely flogged. If she’s not careful, she’ll be labeled a hysterical woman unfit to be a mother; if she does nothing, if she continues to battle this threat on her own, it’s very likely her daughter will be the one who suffers the most. Oh. Yes. There’s also the little matter of that continuing war with Iraq; missiles currently raining down on civilian targets inside Tehran, targets just like the apartment complex Shideh and Dorsa call home.

Much like The Babadook was about dealing with loss and grief in the wake of unfathomable tragedy more than it was a horror tale about a malevolent spirit, Under the Shadow cannily uses a fairly standard, if also expertly staged, ghost story to obsess over a character-driven story arc involving issues of marriage, motherhood, religious fundamentalism and feminism in ways that feel raw, visceral and altogether groundbreaking. Anvari subtly builds tension, showing how Shideh’s longing to remain true to herself is undone more by the dictates of those in power than by the djinn hunting her daughter. The director presents an incredibly multifaceted and thought-provoking character study, adding layers of introspective complexity that are absolutely astonishing thanks to the film’s refreshingly raw candor.

Not that Anvari skimps on any of the thrills or chills. Forget Don’t Breathe or The Witch, this movie is 2016’s scariest piece of pulp fiction. The director, handling the mechanics of his thriller as if he were channeling John Carpenter, William Friedkin, Stanley Kubrick and Henri-Georges Clouzot all at the same time, unveiling a restrained yet also seriously unsettling potboiler that builds its frights with disquietly petrifying ease. The way doors creak, the idea that lethal threats are hovering just outside the frame, the fact the unseen is every bit as terrifying as what is standing right there in the hallway, it’s all perfect. Anvari proves to be a maestro of the macabre, the technical facets so strong it’s hard to find a single fault as far as any of those aspects are, and that includes the sound design, cinematography, production design and editing.

None of which would matter if he doesn’t nail the character dynamics, which he does spectacularly. Shideh is one of the most refreshingly complex characters, male or female, I’ve had the pleasure to get to know this entire year. Not always easy to relate to, she sometimes does things that feel selfish to the point of being obnoxious. But she’s also kind to her neighbors even when they casually toss insults or innuendos right in her face, going out of her way to look in on those in need and rushing to make sure all are okay when missiles rain down upon Tehran. Shideh is also a ferociously protective mother, doing all she can to make sure Dorsa stays safe even when doing so means she must dodge religious and law enforcement authorities who look at her actions as being nothing short of illegal.

Rashidi is excellent, as is young Manshadi, both proving to be a strong team as they navigate their way through the plot’s serpentine ins and outs. But this is Anvari’s baby, the filmmaker composing a fantastic script while also proving to be an assertive force behind the camera. Under the Shadow isn’t just a sensational thriller, it is also a mesmerizing look at a country and culture we here in the U.S. continue to know precious little about. Anvari delivers a phenomenal debut, the thought-provokingly personal human horrors he explores so violently universal I almost didn’t need the subtitles to understand exactly what it was he was trying to say. 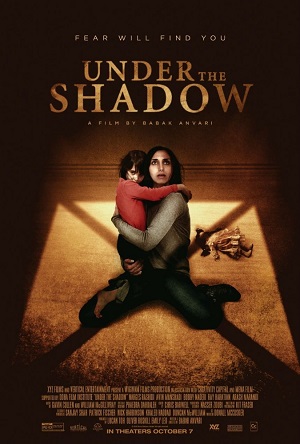