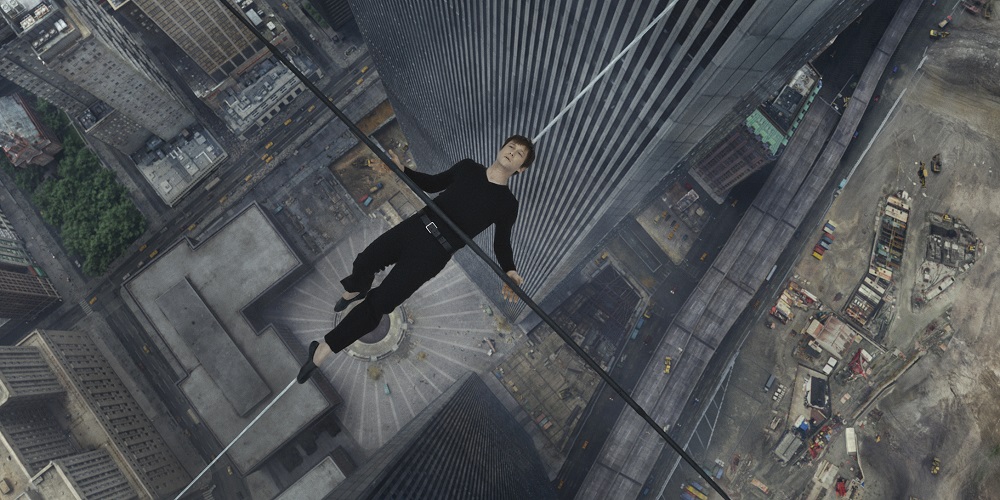 There is a sublime, quiet beauty to Robert Zemeckis’ The Walk that sneaks up on the viewer, grabs them by the jugular and refuses to let go. It is an ethereal, ultimately hopeful journey into the unknown, the director of films as disparate as Back to the Future, Who Framed Roger Rabbit, Castaway, The Polar Express and Flight delivering a soaring testament to the human spirit that’s as inspiring as anything released in all of 2015. 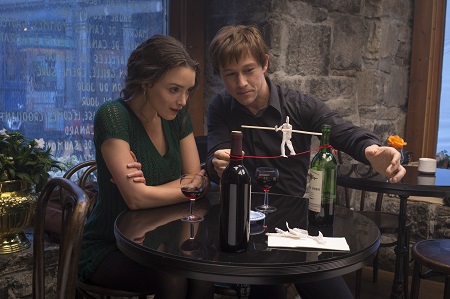 Not that it doesn’t take its time to get there. For roughly 90 or so minutes, Zemeckis toys with the audience much in the same way Jules Dassin did with his 1964 jewelry heist comedic classic Topkapi. That mercurial little gem took a while getting to the end all-be all driving the narrative forward, focusing roughly two-thirds of its plot on the bumbling mechanics of the crew of amateurs (led by seasoned veteran Maximilian Schell under the direction of the beautiful Melina Mercouri) attempting the impossible before finally depicting the actual theft they’d all been training for. It was an odd decision on the Rififi and The Naked City filmmaker’s part but one that ultimately played great dramatic dividends, the connection between this troupe of supposed numbskulls bracingly intimate when push came to shove and jewel-laden daggers needed to be stolen.

Zemeckis, working with co-screenwriter Christopher Browne, utilizes an audaciously similar approach, the pair’s dramatization of Philippe Petit’s 1974 high-wire walk between the World Trade Center towers, a miraculous feat of chutzpah and daring, a surprisingly jaunty and buoyantly comedic affair for much of its 123 minute running time. They present the daring showman’s gambit as something akin to a lark, his assembling of his crew a keystone caper straight out of Mack Sennett silent comedy. The old school approach is disconcerting, in its way, and one can’t help but wonder just how seriously they are supposed to be taking things as events continue to move forward to Petit’s “coup” (as he likes to call it) on the high-wire 110  stories above the streets of New York City.

But then the coup begins, and it is instantly obvious why things were orchestrated as they were. Much like a master magician using his wiles and his fanciful sleight of hand to distract, a lot like how Dassin fooled everyone into thinking Topkapi was a broad comedy before unleashing one of the tautest heist sequences in movie history (arguably only eclipsed by the director’s own Rififi made nine years prior), Zemeckis has the viewer right out there on the wire standing alongside Petit. Featuring dizzying cinematography from Dariusz Wolski (who lensed Ridley Scott’s The Martian, also opening this week), immersive 3-D visuals unlike anything dreamt of or experienced before, excruciatingly effective sound design and Alan Silvestri’s (The Abyss, Forrest Gump) simple yet still sublime score, the filmmaker sees all his themes of faith, family, friendship and hope coalesce into one, the idyllic joviality of it all as thrilling as the wire-walk itself.

Granted, James Marsh’s Academy Award-winning Man on Wire covered pretty much all of this in 2008 to glorious effect, the dramatics fueling Petit’s adventure gone into in astonishing, resplendently gripping detail inside the documentary. But Marsh could never put the viewer 1,400 feet above the ground, could never recreate, at least in some small way, the feeling of weightless rapture that this high-wire magician found back in August of ’74. Zemeckis is able to do just that and more, transporting me to a time and place I could barely fathom let alone believe, reminding us all once again that even the most outlandish and impractical of dreams have the power to engage and inspire in ways almost nothing else can.

Joseph Gordon-Levitt is Petit, telling the story in his own words as he stands atop the Statue of Liberty overlooking a city, and a pair of towers, he would slowly grow to love. Once you get used to the accent, he actually nails the high-wire walker’s vocal patterns and inflections quite nicely, it’s easy to get lost inside the actor’s performance. He seems to understand the deceptively playful tone Zemeckis is gunning for, tapping into it straightaway, hinting at a carnal hungering lingering inside Petit that leads him to attempt what by all rational thought should have been impossible. He balances the man’s ego with his gregarious roguishness, while at the same time making sure it is blatantly clear just how deep and powerful the man’s commitment to his plan proves to be. 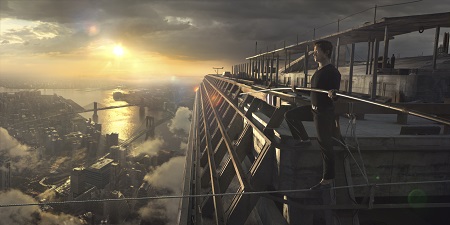 The rogue’s gallery of friends and compatriots who make up the team who will help Petit in his quest include Ben Kingsley as mentor  Papa Rudy, Charlotte Le Bon as girlfriend Annie Allix, César Domboy as best friend and photographer Jean-François, Clément Sibony as wide-eyed mathematician Jean-Louis and a scene-stealing James Badge Dale as fast-talking New Yorker Jean-Pierre. There are others who come into play as well, but these are the most important five, each of them working as one to bring the disparate elements of Zemeckis and Browne’s script to life.

While the film can feel a little silly, especially early on, and while not all of the over-the-top shenanigans and caricatures work near as well as I’m sure the director intended them to (Ben Schwartz and Benedict Samuel as the final pair of conspirators who join Petit’s team are too thinly realized and broadly performed to be anything other than pointless distractions), the air of magical electricity the travels throughout the feature is undeniable. Zemeckis, by bringing Petit’s story to the screen in the way he has, reclaims the World Trade Center as a symbol of hope, a beacon of vision and enlightenment. The Walk is an entertainment coup for the ages, a family-friendly adventure of the human condition reminding us all a little madness now and then shouldn’t just be encouraged, but oftentimes deserves to be celebrated for its inspirational genius. 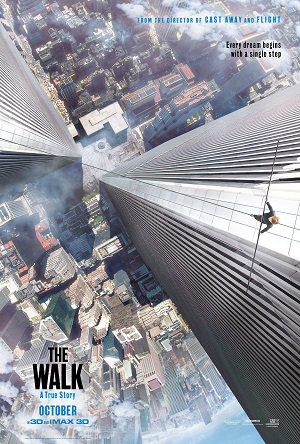