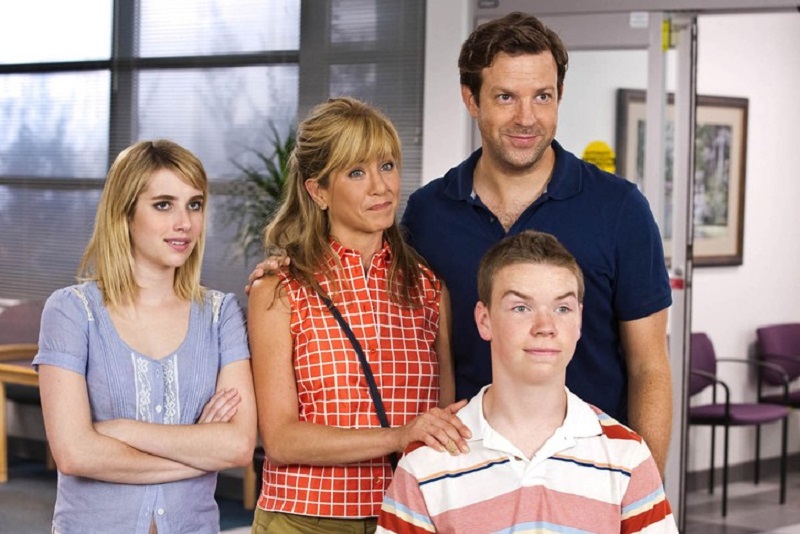 Ribald Millers Has Laughs, Just Not Enough of Them

We’re the Millers is almost a good comedy. At times, it comes amazingly close to being a great one. There are a few major laughs, star Jason Sudeikis carries things with easygoing confidence, Son of Rambow standout Will Poulter proves he’s got fearless comedic chops stealing scenes from his more established costars while Nick Offerman and Kathryn Hahn waltz into the second half of the picture giving it frenetic deadpan jolts of electricity it desperately needed. Director Rawson Marshall Thurber (Dodgeball, The Mysteries of Pittsburgh) reminds he’s got an anarchic eye that’s just off-center enough to keep things interesting, the fact he maintains control of an unwieldy script (credited to four different writers) constantly on the verge of careening off the rails something of a minor victory.

Yet the movie, sadly, does not work. As already hinted at, the script is a mess, never quite knowing what story it wants to tell or how it wants to resolve itself as it comes to an end. It leaves some characters hanging with little to do will others it misuses entirely. Worst of all, it wastes the talents of its main two female stars, Jennifer Anniston and Emma Roberts, giving both actresses characters so woodenly one-dimensional it’s almost embarrassing. Bottom line, for as many times as I laughed, for all the moments that I smiled, there were just as many here that had me frowning, almost as many that had me wanting to throw things at the screen, We’re the Millers ultimately a misbegotten grab-bag of missed opportunities and unrealized potential.

The basics revolve around smalltime neighborhood marijuana dealer David Clark (Sudeikis). A series of unfortunate events have put him in hock to his supplier and former collegiate chum Brad Gurdlinger (Ed Helms), so much so he has no choice but to head over the border into Mexico and pick up a shipment for him. Figuring he sticks out like a sore thumb and is sure to be singled out at the border for search, he hatches a plan to transform himself into a real life Ned Flanders complete with manufactured happy family. Renting a gigantic Winnebago, with stripper next door neighbor Rose O’Reilly (Aniston) installed as his wife, friendless 18-year-old Kenny Rossmore (Poulter) posing as his son and homeless teen Casey Mathis (Roberts) inhabiting the visage of his younger sister, the group hits the road, inadvertently igniting the ire of drug lord Pablo Chacon (Tomer Sisley) in the process.

Offerman and Hahn show up during the film’s second and third acts as longtime marrieds attempting to reignite their passion for one another even though they’ve got their own teenage daughter (delightfully underplayed by “Castle” star Molly Quinn) in tow. Their identities are better left to be discovered by the viewer. Just rest assured that as soon as they show up the movie gets a surge of energy blasted right to the center of its marrow, their ability to transform any moment or idea into something tearfully hysterical without par.

Be that as it may, long stretches of the film go nowhere of interest, the writers struggling to come up with reasons to keep this artificial ‘family’ on the road and in danger. On one hand We’re the Millers wants to shatter suburban stereotypes, ripping them to shreds with gleeful ferocity; on the other it continually wants to embrace them, everything building to a heartwarming John Hughes-esque coda (more Curly Sue or Dutch than Planes, Trains and Automobiles or Home Alone) that’s not remotely believable and without question unearned. It walks an uneasy path, the only things keeping it from heading completely off the cliff being Thurber’s steady direction, Sudeikis’ winning sardonic personality and Offerman and Hahn’s tendency to make filet mignon out of dog food.

All of which might be enough, especially when you throw Poutler’s willingness to do everything and anything to get a laugh into the mix, if it were not for the script’s continual and unrelenting refusal to treat either Rose or Casey as anything other than pointless afterthoughts. The stuff Aniston is asked to do is made bearable only because the actress dives into these sequences with apparent selflessness (even though her mid-movie striptease reeks of self-indulgence), but in retrospect finding almost any of it amusing is pretty darn difficult. As for Roberts, she’s got nothing to play, nothing at all, and why she’s even in the movie at all is frustratingly difficult to comprehend.

There’s too much good stuff in We’re the Millers for me to say I hated it. The screwball nature of a few of the more inspired bits had me giggling happily, while just about every scene involving Offerman and Hahn was a good one. There’s a great bit involving Kenny’s timidity with girls (especially as it concerns kissing), and as it’s the only sequence in the film that allows Roberts to soar I almost can’t help but single it out for praise. As for Sudeikis, he’s the real deal I’m starting to think, the potential for him to become a sort of modern day Steve Martin/Bill Murray hybrid imprinted on his D.N.A., a trait hopefully he’ll explore more fully and to greater effect in future endeavors.

It isn’t enough, not by any standard, but it does give me pause as far as how hard to come down on the finished film itself is concerned. The script has issues, way too many of them, and it isn’t like the great stuff is so good as to make up for the bits and baubles that fall short (way, way short). We’re the Millers just isn’t a disaster, and considering how badly it treats two of its main characters and the ways that it seems to be making itself up as it goes along this in and of itself is a trait almost worth celebrating. Almost. 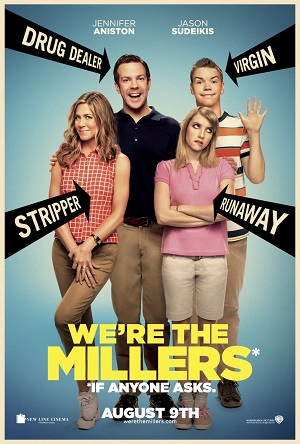