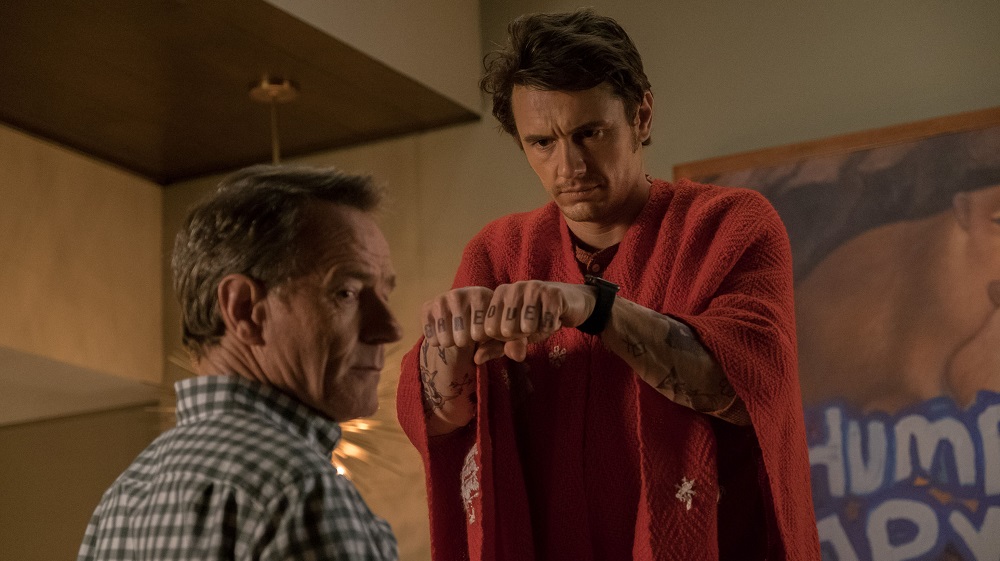 Laughs in Why Him Not Worth the Price of Admission

All-American dad and Michigan publishing magnate Ned Fleming (Bryan Cranston) is excited to spend the holidays with his Stanford student daughter Stephanie (Zoey Deutch). It’s going to be a holly jolly family affair, her mother Barb (Megan Mullally) and younger brother Scotty (Griffin Gluck) equally excited about making the trip to California. The only caveat is they’re all a little hesitant about meeting Stephanie’s current boyfriend, the seemingly larger-than-life, sexually outgoing Laird Mayhew (James Franco), their only encounter with him so far hardly making the best of first impressions. 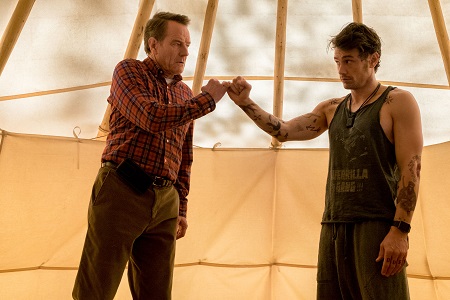 But Laird isn’t the freeloading slacker they all assumed. Turns out, he’s a video game mogul and a bona fide multimillionaire. He welcomes the Fleming family onto his spacious estate with open arms, hoping to show them his love for Stephanie is honest and pure. Problem is, Laird has no filter, none at all, saying and doing every utterly inappropriate thing that goes through his head the moment it enters his noggin. No matter how much money he has Ned is positive this is not the man for Stephanie, and before the Christmas holiday has passed he’s going to make it his mission to ensure his only daughter comes to that same realization.

Working from a story he concocted with actor Jonah Hill (Sausage Party) and fellow screenwriter Ian Helfer (The Oranges), with Why Him? John Hamburg returns to the feature-length director’s chair for the first time since 2009’s moderately successful I Love You, Man. In a lot of ways, this overlong and overstuffed mess of a comedy reminds me a lot of that Paul Rudd-Jason Segel-Rashida Jones enterprise in that both made me laugh, both tugged at my heartstrings and both featured very talented actors going above and beyond in service of material that rarely deserved their herculean efforts. That move, for all the chuckles it might have produced, sadly wasn’t all that good, and as unhappy as it makes me to proclaim it, you can pretty much say the exact same thing here.

Pity, because Hamburg allows Cranston, Franco, Mullally and Keegan-Michael Key (portraying Laird’s take-charge business manager and friend Gustav) free range to milk as much potential laughter out of the material as they all can. They’re all-in, each of them, throwing themselves headfirst into things no matter how dopey, tone-deaf and potentially offensive (and not in an appropriately politically incorrect way, but in a manner decidedly opposite of that) some of what happens might end up proving to be. This is especially true early on, a number of genius, laugh-out-loud bits occurring making me believe, if only for a second or two, this comedy could end up being something special along the same lines of This Is the End or Pineapple Express.

None of it holds together, however, the interconnected bits playing more like rough ideas for a flurry of “Saturday Night Live” sketches than they do parts of a strong, finely-tuned narrative. Interesting ideas like rival companies vying with Laird’s for mobile video game supremacy are hinted out only to never be mentioned again, while the melodramatic schmaltz layered over the material concerning Ned’s printing business is so maudlin even John Hughes during his Curly Sue, Dutch and Career Opportunities downturn would have found similar material to be far too syrupy to have been included in even his schlockiest of misfires.

But there are some big laughs, most of them happening in ways I didn’t see coming. There’s a brilliant bit where Ned jubilantly calls out Laird and Gustav for their Inspector Clouseau / Kato relationship, their clueless reactions to his discover priceless. Mullally has an extended bit where she goes out of her way to seduce Cranston into a little clandestine hanky-panky, the veteran character actress having a field day playing the sequence out to its side-splitting conclusion. Then there is what feels like a ten-minute skit involving Cranston and a technologically advanced toilet that shouldn’t work, shouldn’t be funny and should be a total, and horrifying, chore to sit through. Instead, thanks in large part to him and him alone, the sequence is an uproarious riot, a fact that leaves me increasingly flabbergasted the more I think about it. 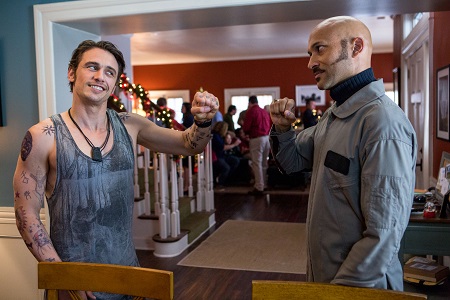 All of which makes the movie’s failure to consistently entertain even more frustrating. The script doesn’t hold together, the last third a particularly hackneyed slog that’s as tiresome as it is banal. Deutch, so good in Richard Linklater’s Everybody Wants Some!! and one of the only redeeming elements of the otherwise loathsome Vampire Academy, gets virtually no opportunity to showcase her skills, while the less said about the facets of the story concerning Gluck’s smart-aleck little brother Scotty the better. As for how the issues regarding Ned’s printing business are concerned, it’s just bad, plain and simple, and it’s hard to believe that as far as resolutions to a major plot point are concerned this is the best the filmmakers were able to come up with.

I can’t hate Why Him?. The movie did make me laugh, Cranston and Franco a delightful pair, while Mullally and Key are more than ready to steal every moment they can when the opportunity arises for them to do so. But too much of this comedy feels rushed and slapped together, the dramatic moments falling so flat caring about what happens to any of the characters or their respective problems is practically impossible. It’s all sound, all fury, the nothing at the center signifying a creative indifference no audience member should pay good money to experience. 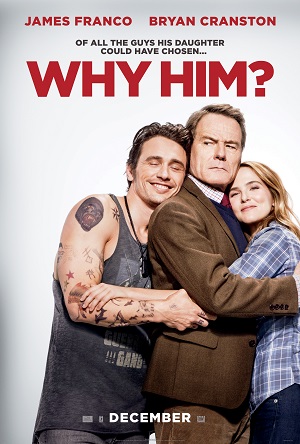