The Wolf of Wall Street

“Let me tell you something. There’s no nobility in poverty. I’ve been a poor man, and I’ve been a rich man. And I choose rich every f**king time.”    –  Jordan Belfort

“Jordan Belfort (Leonardo DiCaprio) isn’t inherently a bad man. A working class kid with stars in his eyes and dollar signs clouding his thinking, after his first job as a New York stockbroker doesn’t go to plan the whip-smart salesman finds himself sitting on the bottom of despair unsure the best path forward. Hatching onto a plan involving low-priced stocks and big commissions, he rounds up a group of friends and teaches them how to sell everything and anything, quickly building up a portfolio and a company the envy of all of Wall Street.

The remainder of the supporting players, including Chandler, Jean Dujardin, Joanna Lumley, Shea Whigham, P.J. Byrne, Cristin Milioti and directors Rob Reiner and Jon Favreau all have signature moments that justifiably standout, while former ‘The Walking Dead’ and current Grudge Match scene-stealer Jon Bernthal makes a major imprint every time he steps into the frame. But the real surprise is newcomer Margot Robbie, the young Australian actress crafting a complex and marvelously nuanced performance as Belfort’s second wife Naomi. She’s the only truly sympathetic figure present in this entire saga, and what on the surface appears to be nothing more than a superficial gold-digger turns out to be a humane and caring figure of regret and sadness who sees the good in everyone only to have them let her down time and time again.

The Wolf of Wall Street is the kind of movie I feel like I need to watch multiple times in order to get a proper hold of. It’s disgusting central figures and the way it looks at them with such dispassionate clarity is as off-putting and as ugly as it should be, the bad taste building in my mouth as indispensable as it is unexpected. Scorsese’s zestfully anarchic approach is exactly as it should be, the Oscar-winning director proving once again he’s still America’s reigning cinematic poet laureate willing to go places and do things others wouldn’t dream of let alone attempt.”

Length is still something of a problem where it comes to The Wolf of Wall Street, and I admit I had trouble watching it all in a single sitting while at home. Still, this is an invigorating, bleakly striking black comedy that feels startlingly alive in ways so many other films could only dream of equaling. Scorsese is working in top form, his direction coupled with DiCaprio’s remarkable performance making the film an absolute must-see people are sure to be pondering, dissecting and mulling over for many years to come.

The Wolf of Wall Street Blu-ray extras include:

The Wolf Pack (17:01) – Not exactly an in-depth featurette on the film’s making. Still offers up some insights and interesting information, but for a motion picture as complex, dynamic and controversial as this one admittedly I hoped for a little bit more.

This set comes with a DVD Copy of the film and is UltraViolet Enabled.

The Wolf of Wall Street showcases Martin Scorsese at the height of his cinematic powers, and as difficult as the movie can be at times, and as long as it is, this is still an uncompromising, deeply fascinating satirical black comedy I’m certain to be revisiting multiple times in the very near future. 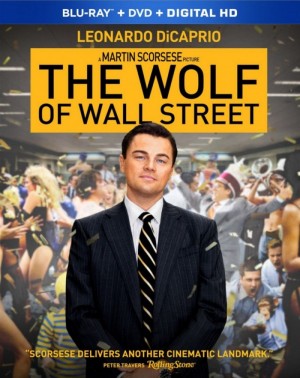