The sole reason to watch writer/director Bart Freundlich’s (The Myth of Fingerprints, The Rebound) latest melodramatic endeavor Wolves is for star Michael Shannon and for Michael Shannon alone. No surprise there, the two-time Academy Award nominee turning in an explosively hypnotic performance as a hard-living, emotionally volatile writer with a gambling addiction who is slowly destroying the lives of his wife and son. He as incredible as ever, and while the movie doesn’t offer him anything particularly difficult to do, the actor makes his moments crackle with an invigorating electricity that’s practically impossible to resist.

Good thing, too, because, once again Freundlich has delivered a motion picture that oozes in potential yet also frustratingly refuses to do a darn thing of merit with virtually a single ounce of it. This movie runs on cliché and is fueled by emotional treacle, dripping into overblown schmaltz at the worst moments, reveling in these instances of excess in ways that are consistently maddening. It derails what should have been a simple, delicately balanced coming-of-age story of a kid coming into his own while struggling to step out of the shadow of a hot-tempered parent, and as such Freundlich’s latest ends up being nothing short of an exasperating waste of time.

Anthony Keller (Taylor John Smith) is a basketball prodigy and an A-plus student on the cusp of earning a scholarship to Cornell. He adores his girlfriend Victoria (Zazie Beetz) and would do just about anything for his loving mother Jenny (Carla Gugino). The problem is his father Lee (Shannon), a respected English professor and successful author who is as egotistical as he is self-destructive, the man’s mounting gambling debts putting him increasingly at odds with local mafia enforcers. Things get even worse when Victoria announces she might be pregnant, Anthony increasingly unsure of what is the right course of action as everything around him spirals out of control.

It’s fairly obvious stuff, and for the most part Freundlich presents it all in as rudimentary a fashion as he can. The director even throws in a pair of curmudgeonly father figures for Anthony, a former New Jersey Nets player named Socrates (John Douglas Thompson) and a devoted uncle, Charlie (Chris Bauer), both of whom offer advice and insight in manner that feels like it was lifted straight out of an Inspirational Fiction 101 course taught at a local community college. While the actors do what they can with the roles, neither character is particularly interesting outside of the words of wisdom they have to offer the struggling 18-year-old, only existing inside this story to push the narrative forward to its familiar conclusion and for seemingly no other reason.

Granted, all of the actors are good, newcomer Smith doing a fine job making an impression. He and Shannon have great chemistry, their aggressive give and take easy to watch no matter how silly or sophomoric the dialogue their both spouting ends up proving to be. Gugino is also solid, and even if her character is thinly written, becoming nothing more than another in a long line of thankless suffering mothers trying to do the best she can for her children seen in countless melodramas made since the invention of celluloid, the actress still gives Jenny just enough life and idiosyncratic impudence to make the woman worthy of keeping an eye on. Additionally, the basketball sequences are impressively mounted and staged, cinematographer Juan Miguel Azpiroz (Saving Grace) shooting them with a bouncy fervor that’s rousing.

But it’s Shannon who lights up the screen, and without him it’s hard to imagine this effort would be worth talking about. While the character falls inside the actor’s established wheelhouse, that doesn’t mean he still doesn’t approach the role with the same sort of tenacity and gusto he brought to previous performances in films as diverse as Nocturnal Animals, 99 Homes, Take Shelter, Premium Rush and Revolutionary Road. All of which makes it a monumental shame that Freundlich’s hackneyed script and uninspired direction ultimately lets him, the other actors and ultimately his latest feature down so completely. Wolves shoots way too many air balls, its inability to find the basket making this dramatic teenage hoop dream nothing short of an emotionally deflated basketball nightmare. 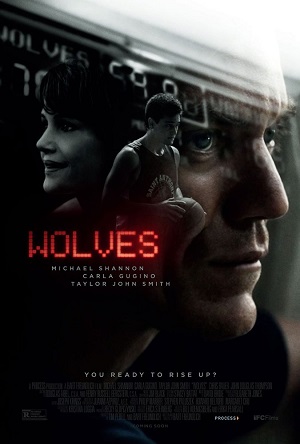