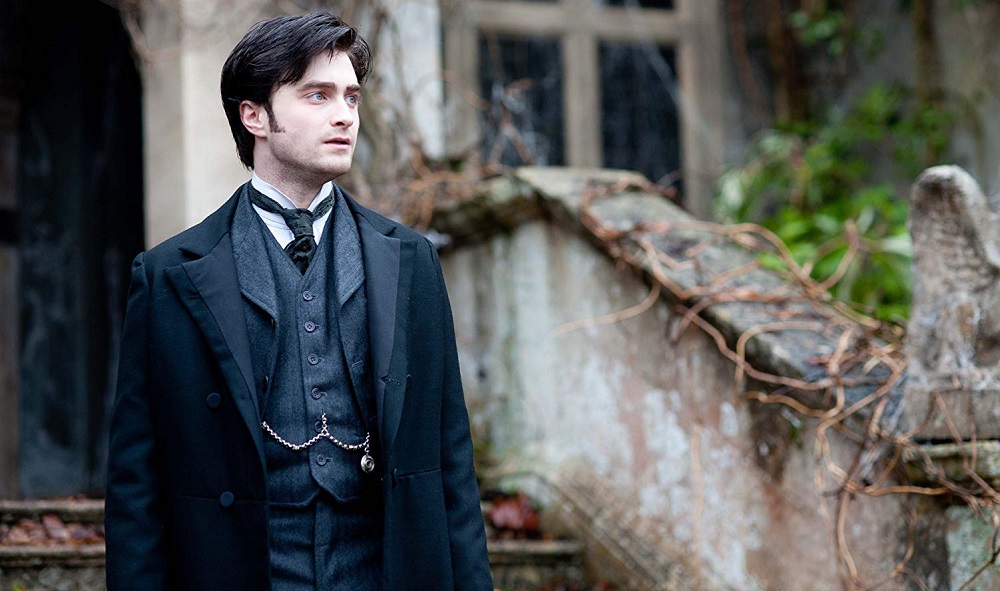 Four years ago, young lawyer Arthur Kipps’ (Daniel Radcliffe) wife died in childbirth leaving him both heartbroken and with a child, Joseph (Misha Handley), to take care of. On the verge of being sacked by his law firm, the grieving father is given one last chance to prove himself, his employers sending him to the small countryside town of Crythin Gifford to deal with the secluded estate of a mysterious recluse. 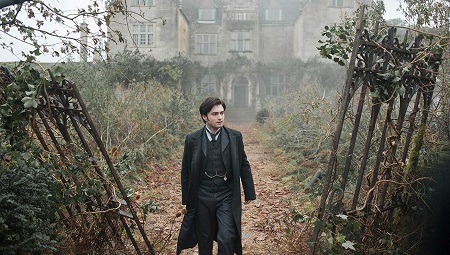 No one wants him there, only Mr. Daily (Ciarán Hinds), the community’s wealthiest inhabitant, showing him even a bit of friendly kindness. He invites Arthur to dinner with him and his wife, Mrs. Daily (Albert Nobbs Oscar nominee Janet McTeer), their meal interrupted by an odd moment where the woman appears to go into a trance and starts madly scribbling chaotic images into the dining room table with a silver knife.

What is with all of this freakiness? Why are the citizens of Crythin Gifford so eager to see the lawyer depart? Most importantly, where are all the children, so many of the parents grieving for lost little ones taken from them in a series of random violent accidents few want to speak about and even less want to try and explain. The secret must be buried somewhere on the land surrounding that secluded dilapidated estate, and Arthur Kipps must uncover it by the weekend before Joseph arrives on the evening train eager to be reunited with his father.

Based on the acclaimed novel by Susan Hill, previously adapted for both the theatrical stage and by the BBC for television, The Woman in Black is a nastily creepy ghost story that for the majority of its running time offers up palpable dollops of spine-tingling suspense. Working from a script by Jane Goldman (Kick-Ass, The Debt), director James Watkins (Eden Lake) does a fine job building tension while crafting a bit of Victorian-era gothic goodness that had my nerves giddily dangling by a thread. Having never read the book, having never seen any of the prior adaptations, I was happily spellbound by what was happening, eager to see how it would all wrap up and to discover if Arthur could uncover answers to murderous questions that might hopefully keep his son safe from harm.

That’s the good news. Sadly, Goldman and Watkins don’t quite manage to sustain tension all the way through until the end. From what is up there on the screen I get the feeling that Goldman never quite figured out a how to conceal the climactic twists and to keep them from being anything other than blandly obvious. As for Watkins, as great a job as he does during the first two-thirds the subtle hand he had put to such good use shockingly disappears, the latter third filled with obvious music cues, blatant jumps scares and lazy visual allusions that did not pass muster.

Until then, though, The Woman in Black is an old school kick, and it’s easy to see why the folks at Hammer were so eager to greenlight the film and get it into production. Arthur’s early steps into Crythin Gifford are perfect, Tim Maurice-Jones’ (Snatch) elegant camerawork and Kave Quinn’s (Harry Brown) eerily astute production design helping Watkins cast an uncomforting spell I couldn’t get enough of. The film recalls classics like The Haunting, The Innocents and The Wicker Man (the original, not Nic Cage in a bear suit), with healthy helpings of modern Japanese horror like Ju-On thrown in for good measure. 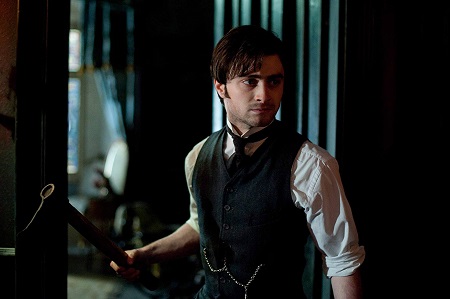 I can’t say that Radcliffe proves he has chops beyond the world of Harry Potter, but he doesn’t do anything to make me believe he does not possess them, either. Like Roddy McDowall in The Legend of Hell House he navigates this world nicely, and even if he doesn’t rise to say the same glorious heights as Nicole Kidman did in the rather (much too) similar The Others that doesn’t mean he does a poor job in the role. The young actor fits the character beautifully, and although he’s not as far removed from the “Boy who Lived” as he probably should be as his first post-Hogwarts cinematic experience goes I think he does just fine.

If only the denouement wasn’t so forgone, didn’t revel in familiarity while also telegraphing its scares like a second-rate John Carpenter B-movie. I was more than ready to extoll the virtues of The Woman in Black, to scream its praises from the marshy moors. But because of that soggy climax I just can’t do it, and even if there are more than enough plusses for me to give the picture a minor recommendation that’s still not enough to warrant the price of a ticket, potential viewers better served to wait for DVD, Blu-ray or VOD when they can snap it up as a rental instead. 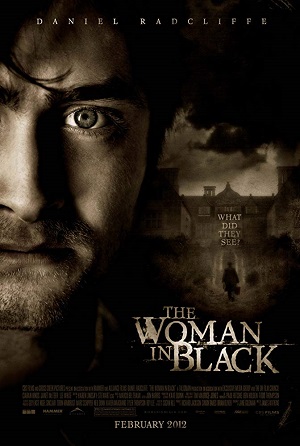