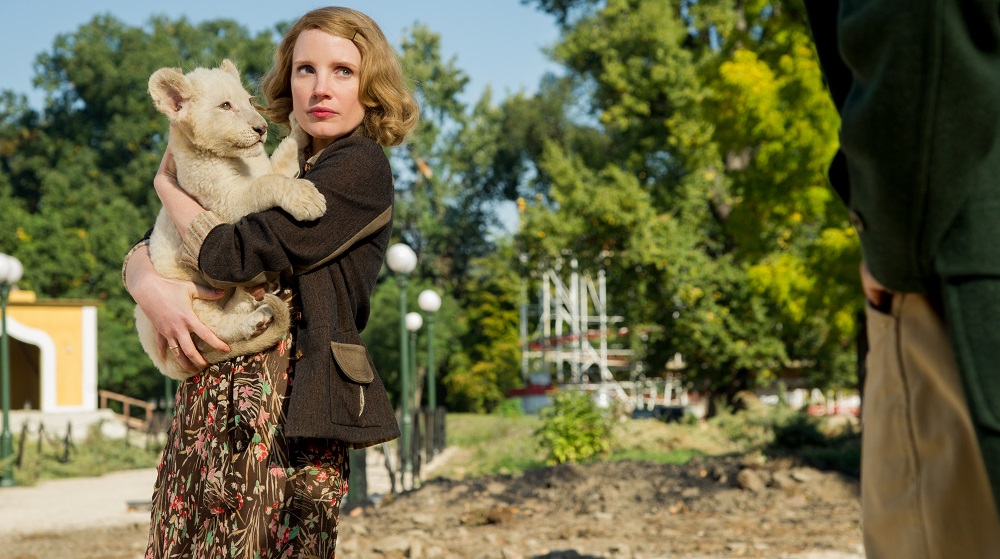 Based on a true story and adapted from Diane Ackerman’s best-selling book, The Zookeeper’s Wife tells the story of a Polish zookeeper and his animal-loving wife who together conspire to liberate Jews from the Warsaw Ghetto during World War II. Under the guise of having transformed their zoo into a pig farm with a goal of providing meat for the German war effort, the pair saved an estimated 300 souls, hiding the majority of them in plain sight right under the Nazi nose. It’s an astonishing tale, one that defies belief, director Niki Caro (Whale Rider, McFarland, USA) and screenwriter Angela Workman (Snow Flower and the Secret Fan) treating the material with a level of self-control that allows the inherent dramatics to work on their own without extra melodramatic embellishments. 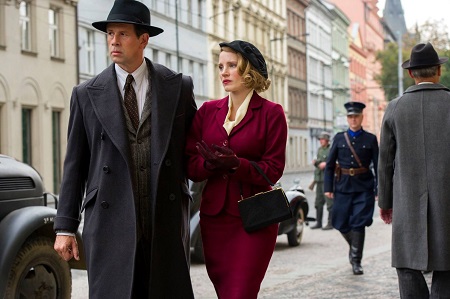 It is 1939, and all of Poland is on edge. When her husband Jan (Johan Heldenbergh) urges her to take their young son and retire to the country, Warsaw Zoo co-owner Antonina Zabinski (Jessica Chastain) refuses to leave either their home or the animals they both love when invasion is still only a faint possibility. But after their city is bombed and their zoo is left in ruins, it is immediately clear that the German threat is no longer theoretical. While friend and zoologist Lutz Heck (Daniel Brühl), in charge of the Berlin Zoo and now responsible for the surviving animals under the Zabinski’s care, promises to do his best to keep them protected, both Antonia and Jan are understandably concerned their lives as they once knew them have been irrevocably changed forever.

They’re right, but not in the way they initially assume. Once the city’s Jewish population is thrown into a fenced-in ghetto, the Zabinski’s realize something must be done. Using the underground tunnels, cages and pens that they once used to transport animals from one point in the zoo to another, Jan and Antonia start shepherding Jews out of the Warsaw Ghetto, hiding them until plans to get them out of the country to freedom can be formulated. It’s risky, putting not only their lives in danger but that of their children as well, and with the suspicious Lutz always lurking around the chance that their plans will be discovered remains perilously high throughout the entirety of WWII.

This is a very good movie, more often than not a superb one. Caro and Workman craft an elegant, spellbindingly personal opening act, setting up Antonia’s character with luxurious ease, Chastain building the foundation for the woman’s eventual transformation from shy animal lover to determined resistance fighter beautifully. They also do a great job introducing Antonia’s connection with the egotistical, smugly pompous Lutz, these early moments setting the stage for the emotional manipulations and interpersonal entanglements to come once the Zabinskis set their plans into motion.

Time does pass a little strangely in the movie, and it’s not always easy to keep up with the transitions as the months and years go by. There are also a handful of little moments that aren’t as deftly performed or defined as so much of the remainder proves to be, Jan’s part in the Polish Resistance not developed near as well as I felt it should have been. I also can’t say I responded to the petty pangs of jealousy the zookeeper showcased as they pertained to his wife’s manipulations of Lutz, those moments the only ones were I felt like Workman’s script wasn’t up to par.

Thankfully, Caro directs with a confidently clever hand, never overplaying things, allowing the emotional storm front surging through Poland, and the world, during that period of history to do the heavy lifting. She goes for a documentary-like approach at the most opportune of times, the sequences where Jan journeys into the Ghetto to ferry out small groups of Jews in the refuse bins he’s been supplied by the German Army to collect food for the pigs back at the zoo especially effective. The first trip is heartrending, a moment of absolute abhorrence and depravity portrayed with such candor and restraint it left me bruised and battered in a way it never could have had Caro chosen to take a more exaggerated approach. 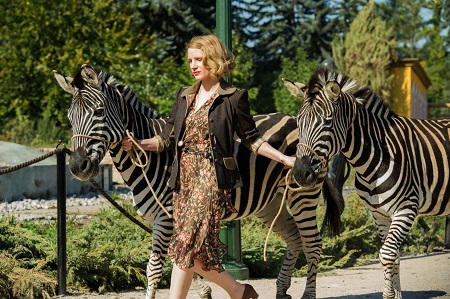 Chastain, who is also one of the film’s executive producers, is terrific, delivering a complex, nakedly raw performance that speaks volumes. While her Polish accent does waver at times, overall she digs right to the core of Antonia, bringing this woman to life in ways that are consistently compelling. Veteran Belgian character actor Heldenbergh is also wonderful, having a lovely, lived-in chemistry with his costar that’s masterful. As for Brühl, he’s good, if a little over-the-top, his latter scenes as the German war effort goes south and Lutz descends into uncontrolled paranoia nowhere near as interesting as his work early on proves to be.

Gloriously shot by Andrij Parekh (Blue Valentine) and handsomely edited by David Coulson (North Country), the movie moves at a zippy, if still never rushed, pace, Caro orchestrating the action as well as she ever has in any of her previous pictures. The veteran director moves in and out of the world that’s been constructed for her here with haunting grace, Antonia and Jan’s loving relationship the moving center all else is focused upon. The Zookeeper’s Wife is excellent, the Zabinski’s story an important lesson in heroism that proves to be as entertainingly compelling as it is fascinatingly essential. 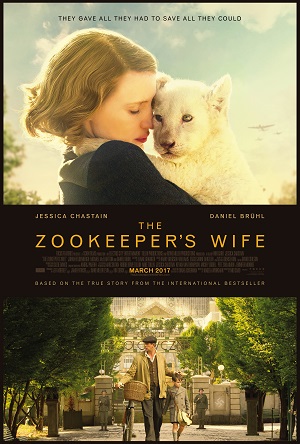