Solomon Northup (Chiwetel Ejiofor) is an accomplished musician living with his wife Anne (Kelsey Scott) and his two children in the North. He is a free man and while he has no illusions that he is considered on an equal plateau with his White friends that doesn’t make him less happy or content with his current situation. He can do what he pleases, no strings attached, he and his wife making a good living and are certain to pass on forthright qualities to their son and daughter they can both be proud of. 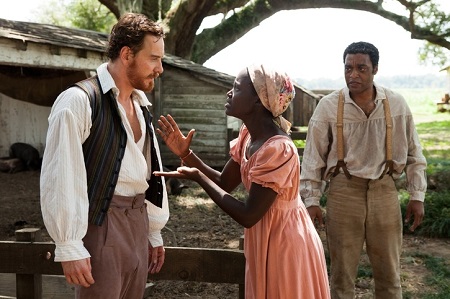 While Anne is away with the children, Solomon makes the acquaintance of Brown (Scoot McNairy) and Hamilton (Taran Killam), two circus magicians looking for a musician to augment their act. They promise him three weeks of work, a healthy salary and a promise to pay all expenses associated with the trip. But these two are not what they seem, and upon arrival in Washington, DC Solomon is drugged, stripped of his clothing and chained to a wall. Branded with a new, false name he is forced to embrace as his own, he has been kidnapped and summarily sold into slavery, this once upon a time Northern family man now headed into the deep South for a life no longer under his own personal control.

Based on the Northup’s memoir of pre-Civil War abduction and dehumanization 12Year’s a Slave, director Steve McQueen’s (Shame) and screenwriter John Ridley’s (Red Tails) adaptation is as essential a piece of cinema as anything that’s hit theatres in ages. It will not be considered an easy sit, that goes without saying, but I hope that doesn’t scare people away from buying a ticket and heading out the multiplex. Truth of the matter is, while the movie is a bit of a tough-minded history lesson, it’s also so incredibly well made, so well written, so vividly acted, paced, shot, scored and edited, the fact it’s also a small taste of bitterly upsetting medicine is beside the point.

The secret is McQueen and Ridley do not flinch, do not pull away, yet at the same time make sure to keep the focus on Northup and his evolution, or, tragically, in this case devolution, from start to finish. He remains the central figure throughout, and while secondary characters pop up and become of vital importance it is this man’s dozen-year saga that audiences should be continually locked in upon. More, they make everything happening to him feel as if it is also happening to the viewer, putting us in Northup’s shoes giving an inside look into this vile institution whose reverberations are still affecting the United States today a full 150 years-plus after it was ended by the Civil War.

I still feel like I’m making this sound like watching the movie is more of a duty than it is something to actively want to do. I really don’t want that to be the case. The characters are fully formed, three-dimensional and continually interesting, even the abhorrent ones. The filmmaking is precise, intimate, everything propelling forward with primeval intensity. There is an emotional fluidity that’s nothing short of astonishing, and for McQueen this might be the culmination of everything he’s being building toward since Hunger hit screens in 2008 and Shame in 2011.

It’s doubtful any of this would be as extraordinary as it is without Ejiofor. What’s great about his performance is the complete absence of pretense about what it is that is happening to him. When Northup is abducted, while he initially feels embolden to make his case, just as quickly he grasps exactly what his status is and the evil that has suddenly transpired. But, even though all he has known, lived and loved has been stripped away from him, his humanity still remains, making his choices and the consequences of them all the more potent in the process.

Ejiofor, so great for so long in films as diverse as Dirty Pretty Things, Kinky Boots, Serenity, Talk to Me, Redbelt and Salt, delivers a potent, stripped to the bone performance that mines all the inner territories coursing through Northup’s being yet still plays close enough to the vest to keep some aspects of himself carefully hidden. He comes alive when necessary, curls up into an internal ball when needed and gives into the longing for personal intimacy when the weight of all he’s been through becomes overwhelming. It’s an amazing piece of acting, the full impact of all that’s transpired coming through in every crack and crevice of the man’s facial movements.

There are some equally great performances, not the least of which come from Benedict Cumberbatch as Northup’s initial owner who respects him for his intellect and suspects the slave’s journey to his acreage isn’t entirely what he’s been told and Sarah Paulson as the suspicious, conniving and somewhat insecure southern belle wife of the protagonist’s second owner. Both actors don’t have a lot to work with or much in the way of screen time but make the most of every second they are allowed. They’re superb, making an indelible impression in the process.

But the duo everyone will be talking about (in addition to Ejiofor, of course) walking out of the theatre are Michael Fassbender as plantation owner Edwin Epps and Lupita Nyong’o as his most prized human slave possession Patsey. With the former, he doesn’t just dwell on bringing out Epps’ more monstrous facets (of which there are many) but also attempts to paint a depraved picture of a man in a constant state of self-doubting free-fall, allowing him to become more than a horrific stereotype turning him into something far more terrifying and much more abhorrent. As for newcomer Nyong’o, she has scenes that ripped my heart in half and left it bloodied and bruised protruding from my chest, the layered complexity of her performance and portrait catching me by surprise each step along the way.

It’s hard to imagine a movie will look into this heart of American darkness with more meticulous an eye anytime soon, McQueen latching onto Northup’s story refusing to allow it to lapse into melodrama or treacle. His filmmaking acumen is beyond reproach, the technical aspects never overshadowing the human story every piece augmenting the next allowing the story to bloom and blossom as it likely wouldn’t have otherwise. 12 Years a Slave isn’t easy, isn’t simple, isn’t warm and cuddly, but that’s perfectly fine because it was never meant to be.