Esteemed linguist professor Dr. Louise Banks (Amy Adams) has been tasked by the U.S. government, specifically by the determined, singularly-minded Colonel Whitaker (Forest Whitaker), to lead a team of fellow experts to do the impossible. Joined by physicist Ian Donnelly (Jeremy Renner), they will journey to central Montana to hopefully communicate with visitors heretofore never seen by anyone on the Earth before now, alien spaceships landing at 12 seemingly random spots around the globe, their intentions for being here a complete and utter mystery. 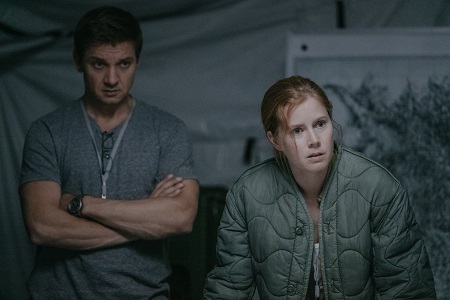 Arrival is a tough film to talk about, because to dive into any number of its myriad of nuances could potentially be a death blow to the surprises and wonders director Denis Villeneuve’s latest stunner has in store for its potential audience. More akin to the filmmaker’s cerebral, mind-bending Enemy  then it is to either of his more accessible mainstream successes Sicario or Prisoners, this science fiction sensation features a superb screenplay by Eric Heisserer (Lights Out) born from the pages of Ted Chiang’s sensational short fiction Story of Your Life. A saga of acceptance, forgiveness and compromise, this is a marvelously entertaining thriller that refuses to sacrifice an ounce of its intelligence at any point during Dr. Banks’ quest for answers, in doing so paints a timeless picture of longing, sacrifice and resilience that’s dynamic and universal.

Not that it isn’t easy to get lost. Heisserer has studied his Kubrick, Tarkovsky, Bradbury and Malick, time bending this way and that in ways that are not instantly noticeable. But Villeneuve taps into this nonlinear construct with ease, allowing Dr. Banks’ meanders, visions and musings to have real heft, authentic weight, they way they all blossom into an insightful bit of strong-willed fortitude and resilience absolutely awe-inspiring. She is the reason that truth does not give way to ignorance, that fear does not lead to violence, her ability to adapt and problem solve leading to a form of courageous catharsis that’s decidedly beyond compare.

Five-time Academy Award nominee Amy Adams is superb. Her performance is mostly of an interior nature, driven by an aching pain that is quickly understood thanks to an opening Up-like montage that had me choking back sudden tears within the film’s first ten minutes. But what’s incredible about Adams’ overall performance is that the nature of this suffering, the events that lead to this personal trauma, they are nothing like what we assume them to be. Instead, what Dr. Banks is dealing with is far more ephemeral, vigorously nondescript, and it isn’t until the climax it becomes clear what has been going on and why all of it has been so gosh darn important.

Adams navigates these murkily emotional waters with astonishing elasticity. Her passion for the project, her longing to do what is right, not just as a scientist seeking knowledge but as a human being grappling with the potentially catastrophic, all of it happens with registered grace, adrenalized subtly. While Adams never plays her fluctuating emotions close to the vest, she also doesn’t let them explode in melodramatic exuberance, instead walking an internalized thin line that is continuingly compelling and inherently realistic. 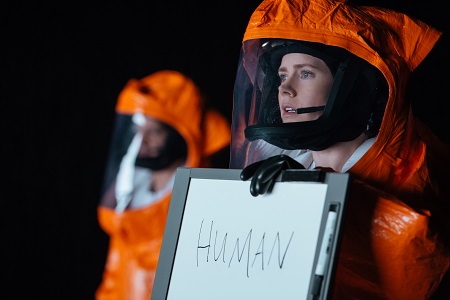 There are points where Villeneuve and Heisserer can’t connect all their dots in an entirely satisfying manner. A subplot involving a few of the more worried soldiers working with the scientists and charged with guarding the alien landing site is slipped in a rather ham-fisted manner. Also, a shadowy CIA agent portrayed by veteran character actor Michael Stuhlbarg feels too much like an afterthought, and while his introduction is intriguing what is ultimately done with the character never rises above stereotypical genre cliché. Finally, as impressive as the outcome might be, Villeneuve still rushes his climax a bit, giant swaths of information delivered with a primitive fury that seems designed more to gin up additional tension than it does to facilitate audience understanding of what is taking place and why things are happening as they are.

Thankfully, all these quibbles are relatively minor, Villeneuve delivering a motion picture that reaches into the heavens in an attempt to grab hold of the stars, the fact it comes close to doing just that cause for celebration. An old fashioned marvel of science fiction storytelling, Arrival asks big questions and provides even bigger answers. A technical marvel (the work composer Jóhann Jóhannsson and cinematographer Bradford Young do here is extraordinary), Villeneuve’s driven commitment to keeping his main character’s personal transformation front and center cannot be undervalued. Time is never what it appears yet always remains of the essence no matter what transpires, this movie inhabiting that place between the seconds where the future is an imaginative possibility and hope is the improbable foundation greatness is built upon.