So Below an Above Average Roller Coaster Ride Into Hell

Brilliant young archeologist Scarlett Marlowe (Perdita Weeks) believes she has made a monumental discovery. Thanks to her clandestine investigation of an ancient underground tunnel deep within the heart of Iran, she believes she’s learned the long-lost hiding place of the legendary Philosopher’s Stone, an ancient artifact invented by 14th century French alchemist Nicolas Flamel supposedly possessing the power to stop death in its tracks.

Heading to Paris she enlists the help of former beau and linguistic expert George (Ben Feldman) the two deciphering the clues realizing Flamel’s hidden the gem in a secret tunnel buried underneath the city inside its fables catacombs. With filmmaker Benji (Edwin Hodge) along for the ride to document their adventure and a team of excitable guerilla spelunkers led by the charismatic Papillion (François Civil) to navigate the underground dangers, Scarlett is certain she’s about to make history.

If you took an Indiana Jones adventure, Lara Croft: Tomb Raider, the Bible, Greek mythology and various found footage horror thrillers into a blender you might end up with something suspiciously like director John Erick Dowdle’s (Quarantine, Devil) latest surreal chiller As Above So Below.

Writing once again with brother Drew Dowdle, the movie begins as something of a cheeky, somewhat silly, if also slightly sinister, archeological adventure tale, almost like some sort of Parisian offshoot of The Goonies crossed with National Treasure. It’s fun stuff, and while there’s an air of decided tension running in tandem with the free-spirited central narrative that doesn’t detract from the giddy atmosphere of discovery and adventure that initially propels events forward.

But then the worm turns, and for the final 20 minutes or so the Dowdle brothers turn up the heat literally taking their characters straight into the fiery pits of Hell itself. Scarlett and company are forced to make a mad dash through Perdition itself, the secrets, failures and regrets that haunt each and every one of them suddenly bursting forth into reality challenging them to make choices where life and death itself hangs precariously in the balance. 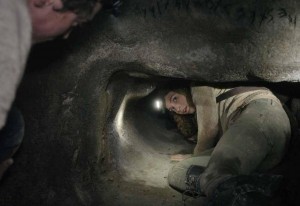 From strictly a plot-driven perspective, the first half to two-thirds easily work the best. Even with a found footage framing device, the Dowdles do a fine job of building characters worth caring about, giving even the more minor faces something of import to do thus making their eventual demises matter as far as the grand scheme is concerned. I like the way things build and evolve, the darker aspects of the terror to come always playing at the edges of the frame making the ultimate twist to full-on horror easy to accept and respond to in the process. It’s all very well done even none of it is all that believable, and I like the fact focus is continually kept on Scarlett and George’s complicated relationship making rooting for them to survive remarkably easy to do.

It’s the final 20 minutes or so where things unravel somewhat, and while events are depicted with palpable electric energy making sense of them is nonetheless close to impossible. But that’s because the Dowdles stop trying to explain things instead choosing to throw chaos and carnage up onto the screen with wildly sadistic abandon. How Scarlett figures things, the solutions to her group’s problems, why some of them must apparently deal with former traumas and calamities and others end up being dispatched apparently at random, none of that is explored in any sort of detail, things just happening to happen and not really because there’d a character-driven reason for them to do so. 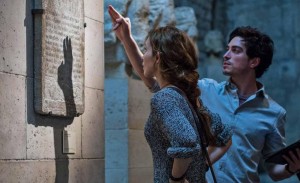 Yet it still works, sometimes superbly, Weeks confidently anchoring things mixing her feelings of confusion, ego, fear, inspiration and love with kinetic, complex relish. It helps immensely that the film was granted the opportunity to shoot in the actual Paris catacombs themselves, the first production to be given the honor, giving things a sense of moody, surreal authenticity they likely would not have existed otherwise. There is a wonderful sense of symmetry between the actress’ performance and the actual environment itself, the former drawing intimate strength from the latter making Scarlett a far more intriguing and involving character in the process.

As Above So Below isn’t a great thriller. Its final portion, while exciting, doesn’t linger for a second to try and explain itself and essentially becomes an escalating series of images chronicling escapes, close calls and sudden deaths that happen just because and not because they make a whole lot of sense. At the same time, director Dowdle has still managed to craft a dandy little thriller that’s a whole lot more fun than it arguably should be, this descent into mystery, madness and mayhem an oftentimes exhilarating roller coaster worthy of taking a ride upon.