“The city is flying and we’re fighting an army of robots. And I have a bow and arrow. Nothing makes sense.”

“Having chased down the last of Hydra’s forces, Tony Stark (Robert Downey Jr.), Steve Rogers (Chris Evans), Thor (Chris Hemsworth), Bruce Banner (Mark Ruffalo), Natasha Romanoff (Scarlett Johansson) and Clint Barton (Jeremy Renner), otherwise known as The Avengers, have finally recovered Loki’s staff and achieved what they believe to be a victory against the forces of evil. But thanks to the gentle psychokinetic nudging of the mysterious Wanda Maximoff (Elizabeth Olsen), Stark is given a glimpse into the future, and what he sees there terrifies him.

With Banner’s aid, believing he’s doing the right thing for humanity, the former weapons developer and the man known to most as Iron Man attempts to utilize the secrets buried in the staff to develop an artificially intelligent robot he thinks will both protect the Earth as well as make The Avengers themselves obsolete. Problem is, this mechanical being, dubbed Ultron (James Spader), isn’t so warm and fuzzy, and immediately looks at Tony, Steve, Thor and the rest of the team as a threat that must be obliterated. With Wanda and her twin brother Pietro (Aaron Taylor-Johnson) as allies, this creature looks to destroy the team from within, and in doing so hopes to create a new world order where human selfishness and weakness is no longer an issue.

The good news as far as Joss Whedon’s Avengers: Age of Ultron is concerned is that he doesn’t attempt to reinvent the wheel. On top of that, he’s not trying to outdo anything he accomplished with The Avengers, not going the typical sequel route of assuming bigger is always better and that more is the key in order to successfully please a hungry audience. No. He keeps the story grounded, the action centered and the characters everyone loves and cherishes right in the middle at all times, understanding less is oftentimes the more other filmmakers frequently take for granted.

The bad news is that, once you get past all the super-powered daring-do, once all the sound and fury begins to subside and fade from memory, the simple truth of the matter is that not a lot of substance is going on. If anything, the film is a rather obnoxious rehash of themes and ideas science fiction has trafficked in for ages (most recently in the far superior Ex Machina) only gussied up in comic book theatrical clothing. The film strains to come up with reasons to warrant its 141 minute running time, and much like recent hit Furious 7 its overly convoluted for no other reason other than it wants to be.

Still, also much like that sequel this second chapter in the Avengers saga can be a heck of a lot of fun when taken on its own merits. Whedon has a gift for showcasing characters whom otherwise never get a chance to shine, and much like he did for Banner/Hulk in the previous epic he does exactly the same for Romanoff/Black Widow and Barton/Hawkeye here. He gives all of them, especially Renner’s Hawkeye, wonderfully complex, intriguingly fascinating side stories, allowing them to come alive and matter in ways they seldom do when they’ve appeared in other entries of Marvel’s Cinematic Universe (MCU). He also has a gift for dialogue and banter, and while the snark gets a tad annoying the humor seldom gets in the way feeling oddly organic as far as each character’s interactions with the others is concerned.

As for the action sequences, Whedon shows he’s on the path to becoming a master on that front, his graduation from the television realm of ‘Buffy the Vampire Slayer’ and ‘Firefly’ made concrete with the visual stylistics and idiosyncratic flair that’s vibrantly on display. The opening, while utter nonsense, in a snowy forest stronghold on the other side of the globe is gleefully vigorous, while the team’s first encounter with Ultron is sinisterly unsettling. The best bit involves the Maximoff twins (who, notably, are never referred to by their nicknames of Scarlet Witch and Quicksilver), Captain America and the titular baddie facing off on a runaway train, the exhilarating hostility driving things gloriously palpable.

In the end, though, the Marvel MCU template rules the day, the film culminating in another battle with various items floating skyward (in this case an entire city) while our heroes battle a seemingly endless onslaught of robotic adversaries coming at them from every conceivable angle. There’s no real human connection to the madness and mayhem, and other than one superb moment between Wanda Maximoff and Hawkeye, as well as a stunning outburst of emotion from a central character after someone close to them makes the ultimate sacrifice, it’s all just a lot of razzle-dazzle hiding the fact there’s not a lot substantive taking place.

There’s a lot more, new characters being introduced while secondary sidekicks from previous MCU entries are given a shout-out hinting that they’re going to get utilized in major ways in upcoming motion pictures. But even if this story does come to a resolution, the fact it’s only building to something bigger (in this case the triple-whammy of next year’s Captain America: Civil War and the double-feature Avengers: Infinity War – Part I and Avengers: Infinity War – Part II starting in 2018) is apparent from the start, lessening the tension as one knows going in little can happen to any of the key characters otherwise those adventures won’t take place. 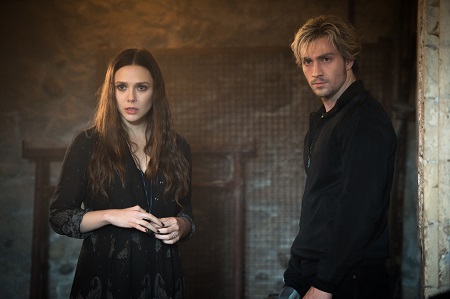 Still, I appreciate the fact that Whedon keeps things relatively grounded, that he allows the characters and their internal dynamics to shine through the chaos even if the villain pulling all the strings is a bit of a wet noodle. While nothing rises to the same heights as Hulk being asked to smash by Captain America or Iron Man heading into an unimaginable void carrying a nuclear warhead, the filmmaker still knows how to create a sense of magic and fun that’s undeniable. Avengers: Age of Ultron isn’t anything more than it what it initially appears to be, and for most viewers I imagine that’s going to be, not just fine, but positively super.”

Free from expectation, away from all the hullabaloo that surrounded it back in May during its initial release, Avengers: Age of Ultron ends up working far better at home than I honestly expected it to. The same issues are still there, the feeling that there’s little danger or sense of dread thanks to the fact Marvel has planned out its theatrical timeline through 2020 sadly remains, those issues and more bogging down dramatic momentum in ways that are slightly annoying.

Still, Whedon, for all the reported problems he had bringing his vision to the screen, still does a nice job by and large, a lot of the character bits working a lot better than I initially gave them credit for being while the action is seriously well staged especially considering just how all over the place – and how many characters are involved in the gigantic melee – the climactic set piece proves to be. Avengers: Age of Ultron isn’t a great superhero epic, but it’s oftentimes an exceedingly entertaining one, and in the end that’s perfectly fine by me.

Audio Commentary with writer/director Joss Whedon – For those hoping for a warts-and-all commentary track chronicling all the reported highs and lows involved with the making of this film, that just isn’t Whedon’s style. Still, he’s very honest in regards to is feelings a lot of the time, making this a far more introspective track than is usual for these sort of things. For those willing to listen all the way through, the filmmaker also drops an Easter Egg, as apparently a somewhat, let’s just say “Angelic,” television law firm makes a cameo appearance early on in the sequel.

From the Inside Out – Making of Avengers: Age of Ultron (20:54) – Fairly decent EPK-style featurette with the cast and crew going through the usual motions waxing rhapsodically about the film and what it is they are hoping to accomplish.

The Infinite Six (7:28) – Basically an Infinity Stone recap reel, nothing more, and one that contains zero information as to when the last two McGuffins will be dealt with before all six are joined together as one in 2018’s Avengers: Infinity War – Part I.

Avengers: Age of Ultron is a fine Blu-ray release, especially for fans, and while the movie doesn’t exceed its predecessor, considering all the inherent baggage that goes with being a MCU entry (as well as being a sequel to one of the biggest hits of all-time) the fact that it ends up as enjoyable as it ultimately turns out to be is something of a minor victory.