Better Living Through Chemistry is a bad movie. Worse, there was no reason for it to be. Expertly cast, reasonably well paced and featuring a decent enough premise (small town pharmacist feeling like his life is in a depressing rut begins an affair with a seductively glamorous local who introduces him to the psychedelic wonders of his wares things spiraling quickly out of control thereafter), the movie should at the very least be worth a handful of a few perceptively unsettling laughs. Instead, directors Geoff Moore and David Posamentier, who also wrote the trite script, revel in sitcom level platitudes doing nothing with either the material or their all-star collection of actors, the film leaving a relatively bizarre, uncomforting aftertaste that’s as distasteful as it is unfortunate.

Sam Rockwell is Douglas Varney, a lonely man trapped in what he thinks is a tyrannical marriage with domineering wife Kara (Michelle Monaghan). He runs the local pharmacy, seemingly forced upon him by his truculent father-in-law Walter (Ken Howard), and for all intents and purposes has given up on trying to do anything close to interesting with the remainder of his life. 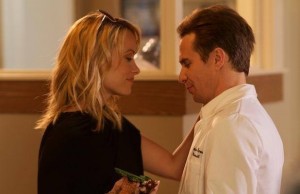 Enter Elizabeth Roberts (Olivia Wilde). She’s wealthy. She’s sexy. She’s also stuck in a bad marriage. To top it off, she’s a hopeless addict whose free-spirited tendencies are hardly secretive. Elizabeth gets her hooks into Douglas something fierce, leading him down a mind-bending path of alcohol and recreational drug use that allows his inhibitions to vanish and his true opinions to come out into the open. Sure, there’s the unintended side effect of his pharmacy suddenly being investigated by the D.E.A. but that doesn’t stop the pair from living it up like never before, repercussions be damned just as long as a good time is had by all.

Other veteran actors appearing here include Jane Fonda and Ray Liotta, while a bevy of recognizable faces show up in a series of supporting roles. But this is Rockwell’s showcase, plain and simple, the filmmakers wisely placing him front and center allowing the celebrated performer to cut loose and go ballistic like only he can. He’s as unhinged and uninhibited as ever, a handful of second act monologues crackling with the same kind of sardonic, acid-tongue ferocity the actor has long been known for.

Good thing, too, because without him I’m not sure there would be anything positive to talk about. Moore and Posamentier’s script feels like an idea desperately searching for a valid reason to exist more than it does an actual feature-length narrative, the pair falling upon the most rudimentary of rom-com and Capra-esque melodramatic clichés in order to get themselves from points A to B to C. The characters are sketchily written at best, all of them nothing more than blank ciphers who barely register as flesh and blood creations. More, at times it is like each is inhabiting a completely different motion picture, making the fact they’re all supposed to be existing in the same cinematic universe, let alone the same small Americana drenched town, hopelessly difficult to believe.

Wilde admittedly has moments, I do like it when she gets the opportunity to cut loose and revel in her comedic abilities (watch her in Butter and you’ll see what I mean), and there is a grand sequence right before the third act begins its dreadful cycle into mediocrity where I thought, just for a second, Rockwell was going to be able to save things all on his lonesome. But it sadly doesn’t happen, and at no time did I ever feel like the filmmakers had a good enough handle on things to allow any of what was going on to matter in a way I’d be happy with. Better Living Through Chemistry is a waste of time, the whole thing nothing more than a bad drug that’s about as addictive as a placebo washed down with a tap water chaser.