Veteran submarine man Robinson (Jude Law) has just been let go by his longtime employer, a deep sea salvage company that doesn’t see the need to keep a man like him around with modern technological advances in underwater search, rescue and reclamation being what they now are. But when a fellow former employee reveals a secret involving Russian gold, a WWII submarine and international political skullduggery, the grizzled Captain is suddenly faced with an opportunity for riches the likes of which he heretofore never could have imagined.

With the shady Daniels (Scoot McNairy) keeping an eye on things for an unnamed moneyman who’s fronting the bill for the operation, Robinson assembles a crew of 12 hardened seaman, half Russian, the other half fellow Britons, to head to the middle of the Black Sea in order to recover this lost treasurer. But tensions run high when everyone learns exactly what it is that is at stake, as well as the potential payday waiting for them at the end of the voyage, making trust between shipmates difficult to come by.

The submarine thriller Black Sea is The Treasure of the Sierra Madre by way of The Hunt for Red October and Run Silent, Run Deep, an angst-riddled foray into the heart of darkness few are likely to be able to endure and even less are going to survive. Savagely directed by Kevin Macdonald (The Last King of Scotland, How I Live Now), he and screenwriter Dennis Kelly revel in the carnal carnivorous brutality of the scenario rarely allowing sentimentality or melodrama to enter into the proceedings. It’s down and dirty, the moralistic underpinnings corrupt and sour yet also relatable and intimate, the downtrodden crewmen working class survivors desperately in search of reasons to keep fighting in the hope that a better life for their respective loved ones isn’t an impossible dream forever out of reach.

There aren’t a lot of surprises. Where all of this is headed is apparent right from the moment Robinson learns of the gold, those on his crew who swim to safety and those that end up curling up inside Davey Jones’ locker not exactly a shock, either. The template Macdonald and Kelly are following is a familiar one and as such there are points where the mechanics required to connect one moment to the next are far too apparent, and so the emotional undercurrents cascading through events like a torpedo slicing through the water are sadly diluted a fair amount. 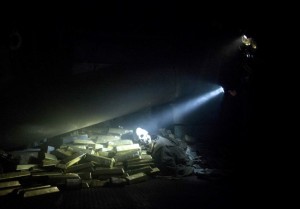 Thankfully, what the film lacks in originality it more than makes up in complex characterizations and mesmerizingly terrific performances. The supporting cast is delectable, each doing their best to make every moment count and every scene crackle with tension and electricity. Ben Mendelsohn is particularly memorable, playing an oily deep sea diver who’s far more comfortable walking the ocean bed than he is shuffling around inside the metal confines of a floating sarcophagus. His catastrophic stupidity as it relates to his Russian crewmates is bracingly juxtaposed alongside his unwavering commitment to see fellow divers survive, multiple sides of his calamitous personality clashing and hammering one off the other in ways that are repugnant and meritorious each in almost equal measure.

This makes him ripe for abuse, McNairy’s timid, selfishly callow company man doing a number on the diver’s psyche that gets more and more potent, bordering on tragic, as things accelerate to the inevitable finish. Mendelsohn takes what could have been a rote, one-note rube of a human being and transforms him into a figure of pitiable dehumanization, his rises and falls chronicled in breathlessly intimate detail allowing the true horror of the moral failings at the center of things to be even more psychologically ruinous.

It also helps considerably that the thriller is extraordinarily well shot by cinematographer Christopher Ross (Eden Lake). Coupled with crackerjack sound design and some stupendous production work supervised by designer Nick Palmer (Red Tails), Ross’ camera glides through the claustrophobic confines of the sub with magnificent dexterity, the movie calling to mind Wolfgang Petersen’s Das Boot and Tony Scott’s Crimson Tide while also staking claim to a visual allure and acoustic esthetic uniquely its own.

None of which would matter if Law wasn’t up to the task of captaining things through to the end. He commands the screen, dominating with a fatherly, unwavering confidence that breaks through the veneer of common sense becoming something painfully truthful and ruefully catastrophic. There is pain and suffering underlying every comment, every gesture, making his few overtures of comfort and understanding all the more affecting. Law is as great as he has ever been, raising the overall tenor of the material to a level it otherwise never would have achieved without his efforts.

Macdonald isn’t reaching as high as he has in the past, and it is apparent he’s content to craft a B-grade old school thriller about the destructive influence greed has upon its prey and little more. But that doesn’t make Black Sea any less enthralling, the effect it had upon me as unsympathetic and as callous, yet also as entertaining, as any I could have hoped to have experienced before walking into the theater.