It is doubtful I will see a better movie than Richard Linklater’s Boyhood in 2014. Without question, I won’t see a more ambitious one. Filmed over the course of 12 years, following the evolution and growth of a child into a young man, the film is one of the more unlikely and intriguing coming of age tales ever put to celluloid.

But if it were only that? If it were only a cinematic hat trick where a core group of actors and filmmakers reunited every 365 days or so to film segments of a broader tale with no real idea where things were heading? While we’d still have something of interest to talk about it’s less likely I’d have cared near as much or responded so wholeheartedly to all that transpired during the film’s mesmerizing 165-minute running time. Linklater doesn’t sit on his laurels, doesn’t allow the conceit itself to do all the talking, the filmmaker composing a mesmerizing, heartfelt and bracingly authentic narrative journey I related to body and soul.

We meet Mason (Ellar Coltrane) in 2002. His Mom (Patricia Arquette) and Dad (Ethan Hawke) have recently split up, he and his sister Samantha (Lorelei Linklater) left in the former’s care. Over the next dozen years the kids make their way through school, their father becomes the man he’s supposed to be (and not the one he fantasized about in his own youth) while their mother finishes her own education making more of herself than she imagined possible. Questions of self and identity arise, Mason progressing from boy to man right before our very eyes. 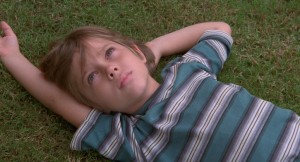 Linklater is obsessed with the moments between the moments, the big, potentially melodramatic stuff mostly taking place off-camera. What the filmmaker is interested in is seeing how people react to those things, looking at how they shape and mold a life over the course of time. Why and how Mom and Dad broke up isn’t interesting; how the kids continue to relate to their parents in the aftermath is. First kisses are nice, but what is it that leads to the second or third one? What songs made up the soundtrack of our lives? What quiet moment spoke the loudest? What argument hurt the most? Which conversation resonated the strongest? These are the things that matter, and as such this is where the director focuses all his attention.

Boyhood is remarkable stuff, filled with drama, intrigue, suspense, laughter, tears and all the rest that comes with that. Not so much a life in total but a snapshot of one being formed, elements internal and external colliding and collapsing in and onto themselves as naturalistically as waves hitting the shore or the wind sweeping across a desert plain. No need for extra embellishments as the inherent mechanics of growth and maturation speak clearly for themselves, Linklater remembering truth is far stranger, and thus more enchanting, than fiction, infusing it inside his narrative spectacle with beguiling, almost monumental ease.

Considering the difficulties that are presented in an enterprise such as this, the hardships on the actors are obvious. Shaping a single, distinct performance over the course of years had to be a challenge, especially considering the two unknowns (Coltrane and Lorelei Linklater, the director’s daughter) working alongside the two seasoned professionals would essentially be portraying their journeys from child, to teen, to adult as they actually happened.

Hawke gets off easy. Not only does he have some modicum of experience doing something sort of similar with the director as far as the pair’s Before Sunrise, Before Sunset and Before Midnight are concerned, but just by the nature of his role he isn’t required to show up every year of Mason’s development. Still, he does a nice job, a few signature scenes near the end where Dad admits some pretty big truths to his high school graduate son crackling with requisite authenticity. 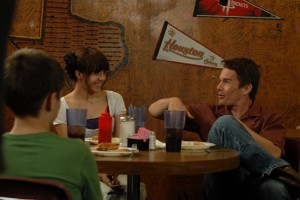 It is Arquette who does the heavy lifting. Unafraid to look her age throughout, eschewing movie star glamour at every turn, she’s the one who is there every year, every moment, taking care of her two children best she knows how while at the same time trying to put her own life into some semblance of recognizable order. It’s a carefully composed and utterly distinctive performance, consistently pulsating with energy and life. The actress mines deep, emotionally complicated emotional terrain yet never does so in a way that would pull focus from the central character, augmenting Mason’s story, never overshadowing it.

Linklater, never one to shy away from a challenge, goes above and beyond, weaving the smallest facets of his saga into a tightly wound, virtually indestructible web I couldn’t have escaped from even if I had wanted to. He remembers that life, just life, nothing more, is more moving, more profound, more interesting, entertaining and inspirational, than any superhero flying through the air at the speed of sound or spaceships blasting through hyperspace with lasers blazing away could ever be. Boyhood isn’t just about Mason’s life, it’s about all our lives, reveling not so much in the destination as it does in the joyous minutia of the journey itself.