Jimmy Bobo (Sylvester Stallone) is a Louisiana hitman. For the past few years he’s been working with partner Louis Blanchard (Jon Seda), the pair doing what is required of them as long as the payday is right. But their latest job doesn’t go entirely as planned. Not the hit, mind you, that went perfectly, but the payoff, the twosome double-crossed leaving Louis dead and Jimmy angry. 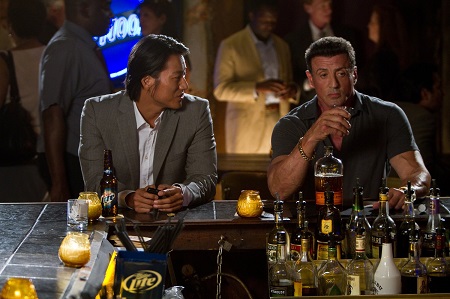 Taylor Kwon (Sung Kang) is a Washington, DC detective who has come to this backwater Louisiana town searching for answers. His former partner, recently let go from the force for being a dirty cop, was murdered, all signs pointing to a professional hit. But it isn’t the murder perplexing the detective, it’s the fact it appears his one-time associate was attempting to blackmail someone highly connected in the political spectrum, and it’s that information he wants to get a hold of so he can bust open the case and put the right people behind bars.

It doesn’t take a rocket scientist to figure out what happens next, these two men on the opposite sides of the law pursuing a similar agenda teaming up to find out who ordered their respective former partners killed and get some justice in the process. Granted, one is out for blood while the other is after the truth, but that’s a fairly minor obstacle for the duo to get beyond. Their goal is a common one, and although their methods differ sooner or later respect between the men will be engendered while those in their crosshairs will be wishing they’d never double-crossed either in the first place.

So goes Bullet to the Head, action maestro Walter Hill’s return to hard-boiled cinematic whiz-bang after 2000’s Supernova was drastically overhauled by its studio (and thusly tanked) leading him to spend the last decade making “Deadwood” for HBO and the two-part miniseries “Broken Trail” for AMC in 2006. While the material might be adapted from the popular French graphic novel Du plomb dans la tête written by Matz and illustrated by Colin Wilson, the reality is that this old school skull-crusher is right up the Hard Times, The Warriors, The Long Riders, Extreme Prejudice, Red Heat and Last Man Standing director’s alley, all the beats, steps, plot progressions and narrative speed bumps as familiar as they are comforting.

The movie holds a lot in common with Hill’s 48Hrs, Alessandro Camon’s (The Messenger) streamlined and no-frills script following the template of that Eddie Murphy/Nick Nolte smash pretty much beat-for-beat. Granted, here our two mismatched heroes aren’t looking for money, they’re looking for those responsible for the deaths of the respective partners, but by and large there’s not much difference. Bobo and Kwon bicker. They banter. One hurls racial insults while the other brushes them off with self-effacing sarcasm. The latter proves himself equal to the former while also berating him for his tactics, the two forging a hardscrabble mutual affection that defies their proper place in the criminal-law enforcement pecking order.

Granted, Bullet in the Head is nowhere near as great as that 1982 classic, Stallone a solid if unsurprising monosyllabic stand-in for Nolte while Kang, as likeable as he might be, is nowhere near the ferociously fearless comedic firebrand that a young Murphy was. Additionally, the clockwork nature of the whole thing can get a little old, and even though Hill packs the film with solid character work from the likes of Seda, Christian Slater, Adewale Akinnuoye-Agbaje, Brian Van Holt and Holt McCallany, it isn’t like he gives them a heck of lot to do before Stallone, Kang or a massively imposing Jason Momoa finds a way to do them all in.

Don’t worry. That last line wasn’t a spoiler. This is a revenge opus, and it isn’t like a lot of the people popping up within the confines of the narrative are going to make it all the way to the end alive. It’s easy to know who is going to get it and when said demise is going to come, the lack of surprises not so much a problem as it is par for the course. 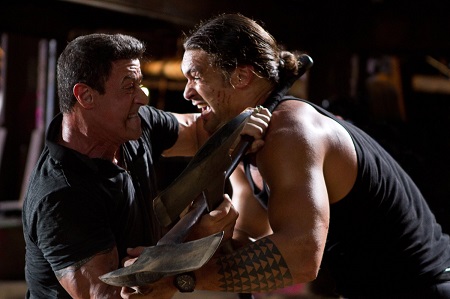 Hill doesn’t just realize this, he goes so far as to embrace the fact, reveling in the lead-ups to each confrontation, making sure the tension gets ratcheted to its proper place. The guy still knows how to stage action of all kinds, the editing and camerawork always working in tandem to make sure each punch is felt, each bullet connects and every splattering of blood hits the floor at the perfectly precise moment. He gets the most out of each scene, cutting to the quick when he has to while allowing other moments to play themselves out a beat or two longer than a lesser director would have realized was proper.

I guess that means I liked Bullet to the Head, flaws and all, and so I’m willing to give it something of a moderate pass. Truth is, this ‘80s-style barnburner kept me entertained, especially every time Momoa walked on screen looking like he was going to cleave someone’s head in two with nothing more than his fist (seriously, if he’d have played Conan like this, his 2011 remake might have been something special instead of an outright abomination), and as such I didn’t mind the unoriginality of the script or the obviousness of Bobo and Kwon’s quest. Walter Hill, even at 70, shows he hasn’t lost his touch, and without him at the helm I doubt there’d be anything here to talk about.