Cheerful Weather for the Wedding (2012)

It is safe to say Cheerful Weather for the Wedding isn’t likely to be a favorite with bubbly young ladies looking for a timeless 1930’s-era British romance or for women of a certain age hoping for a rose-colored confection reminding them of days, and maybe even dalliances, gone by. Granted, anyone even slightly familiar with Julia Strachey’s novella would probably be able to tell you that before I could, and the fact it was a special favorite of none other than the great Virginia Woolf should speak volumes as to its acerbic, unsentimental melancholic tone. 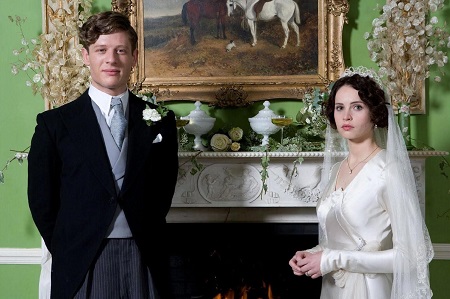 In other words, for as sprightly as it is paced, for all its moments of mirth, whimsy and merriment, director Donald Rice’s adaptation isn’t exactly a happy or joyous affair. Writing the screenplay alongside fellow first-timer Mary Henely-Magill the freshman filmmaker attempts to walk a fairly narrow tightrope, trying to deliver a drama that captures the heart while also speaking sad truths in regards to the choices we make and the mistakes we regret.

I believe he succeeds, the movie a slowly building firestorm of emotional longing and remorse that kept me watching diligently for each of its relatively brief 90 minutes. Unfamiliar with the source material, I was never sure where this was heading, the inherent melodrama refined and subtly delivered. The movie builds with a tragic eloquence that’s haunting while at the same time delivering a justifiably tear-filled coda that had me smiling in hopeful exuberance, the thought young love might in fact win out sunnily undeniable.

But not certain. I love that the filmmaker refuses to lead the viewer in conventional directions, leaving many questions purposefully unanswered. There are no easy resolutions in regards to the multitudes of fates that could lie in wait for any of the protagonists as they come to their inevitable forks in the road, and whether the right decision means former lovers should be reunited or freshly minted matrimonial coupling should be maintained isn’t what’s decided here.

The narrative starts with Dolly Thatcham (Felicity Jones), a young bride-to-be hiding out in her room on the morning of her wedding day. Downstairs, her widowed mother (Elizabeth McGovern) has planned everything down to the final letter, certain nothing can go wrong no matter what mischief Dolly’s cousins Tom (Olly Alexander) and Robert Dakin (Luke Ward-Wilkinson) or her whiny younger sister Kitty (Ellie Kendrick) might choose to get into. Thankfully best friend and bridesmaid Evelyn Graham (Zoë Tapper) is on hand, the lovely ingénue more than capable of handling just about any annoyance thrust her direction.

Things get dicey when newly minted anthropology professor Joseph Patten (Luke Treadaway) slips in through the kitchen door. Dolly invited him, although part of her isn’t certain why she did so. The two have a history, after all, their last summer together a whirlwind romantic game neither of them has gotten over or have been able to grasp the meaning of.

There are a bevy of colorful characters, of course, and one does gets the feeling that both Rice and Henely-Magill don’t know exactly what to do with them all, many of the supporting players hanging around the sidelines like colorful bits of scenery more than anything else. Little plot tangents have potential, look like they might go someplace interesting, yet sadly never bear the fruit they could have had the filmmakers given them more attention and allowed them room to grow.

At the same time I didn’t mind many of these underdeveloped subplots particularly much, the main storyline so self-assured and confidently developed my focus hardly wavered. Rice floats between the wedding day scene at the Thatcham home back to the summer days when Dolly and Joseph first ended up coiled within one another’s arms, the dream-like haze he constructs having an elegiac feel that suits things perfectly. 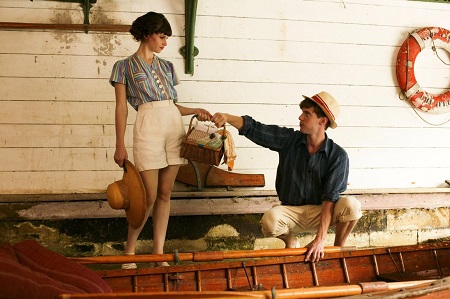 It helps that in Jones and Treadaway he has found a pair of young talents who slip into this milieu with grace and ease. The looks they pass one to the other, the way they begin a sentence only to stop in the middle and launch into an entirely different thought altogether, I understood and felt every pang of their shared history right away. The pair achieves so much even though the time they share onscreen is borderline nil, and as such they are, as it should be, the driving force that gives the film every ounce of its emotional heft and tragic authenticity.

Do not let the title fool you, Cheerful Weather for the Wedding is hardly the joyous, maybe even celebratory event some might suspect it to be. There is comedy and there is romance, but a romantic comedy this adaptation of Strachey’s novella this movie certainly is not. And that’s just fine, Rice finding the gradations and brittle beats of humanity at the core of the story, presenting them to the audience as-is and with little in the way of fluff or fanfare. I was surprised just how much this one ended up getting to me, Dolly and Joseph’s journeys – whether together or apart – ones I desperately wish I could continue to follow.