Elizabeth Benton (Melanie Papalia) is going to live the next few months of her life almost entirely online. She has received a grant for her graduate thesis project involving social interactions conducted entirely over chat rooms and web cameras, and it is a sociological endeavor she’s eager to get started with.

One of her interactions, however, makes her question what it is she’s doing. During a visit to her favorite chat site “The Den,” Elizabeth is met with one of the most horrifying and gruesome scenes she’s ever witnessed. A young woman is apparently butchered right before her eyes, and even though she reports things to the police and turns over a recording of the event itself answers to the veracity and truth of what she saw are still difficult to come by. 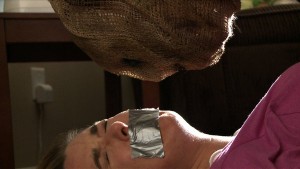 What follows is one of the more innovative, imaginative and deeply disturbing found footage horror films of recent memory, The Den shaking up the genre construct doing something unique and different all in the service of story and character making the scares more effective because of that. Director and co-writer Zachary Donohue has managed to do something wonderful with this rather tired conceit, reinvigorating it in ways that are constantly surprising, an uncomfortable sense of dread omnipresent all the way through until the end.

This is amazing, really, because once it becomes apparent what is happening to Elizabeth and her friends there’s not anywhere too surprising for things to end up at. This isn’t a pleasant horror experience, a diseased malignancy coursing through the film’s veins right from the start, and as such I can’t say watching it is cathartic or fun. This is a story about death, the threat of it and the obvious human impulse to fight back when faced with it, and for 80 minutes this is the world Donohue drops the viewer into refusing to allow them to look anyplace else.

As big a genre geek as I am, I do admit nihilistic voyeurism headed towards almost certain gloom and doom normally isn’t my thing. But The Den is the exception to the rule, the filmmaking acumen so high and the script so strong I found I was absolutely obsessed with discovering how many secrets Donohue and fellow writer Lauren Thompson were going to reveal before the end came crashing unceremoniously down. There is a pulsating confidence driving things forward, Elizabeth’s spiral into a pit of darkness and despair, all of it caught by her own laptop’s webcam, as upsetting as it is bleakly fascinating.

That webcam is our window into the world Donohue and Thompson have constructed, and while they do not always follow the rules they have set for themselves more often than not there is a visual consistency that’s boldly effortless. Even when things are fun, even when Elizabeth’s journeys into the nebulous world of online chatting are tinged with a combination of hope and comedy, there is also an all-encompassing sense of menace permeating every new interface with a random stranger looking to make a virtual connection.

And that’s the key to the film’s success. It takes its Rear Window meets The Most Dangerous Game premise and puts it where so many now spend the majority of their time. The online world has slowly but surely taken over, relationships so seldom made hand-to-hand but instead via the click of a mouse and ding of a new instant message. But these interactions are rarely long-lasting. More, the invisible nature of them has the potential to be downright dangerous, Donohue and Thompson playing on those fears in a way that feels fresh and original.

It’s pretty nasty stuff, there’s no denying that, and I’m not kidding when I say it’s not remotely surprising where everything is headed to. But the getting there? That’s a whole different matter, Donohue building tension and suspense beautifully before unleashing a climactic sequence that comes close to outdoing the anything-goes ballistics of the “Safe Haven” segment of V/H/S 2. As disagreeable as the film can be there’s still no denying its inherent power to enthrall and amaze, and as far as horror fireworks are concerned the ones firing out of The Den’s rabbit hole are as bold, vibrant and as bloody as any I could have hoped for let alone imagined possible.