“Comes back to a man’s got to know how to fight…because how you fight is all that counts at the Donnybrook.”

“’Jarhead’ Earl (Jamie Bell) is an ex-United States Marine living somewhere in upstate New York with his family. Wanting to provide a better life for his two children he robs a local general store for the entry fee to a secretive once-a-year bareknuckle backwoods cage fight known as the Donnybrook where the winner takes home a cool $100.000 and the losers are lucky to head back home with their lives. Before leaving he makes an enemy of drug dealer ‘Chainsaw’ Angus (Frank Grillo), and while the two have never been friends after their latest confrontation it’s safe to say their mutual distaste for one another has grown into a full-fledged homicidal rage. 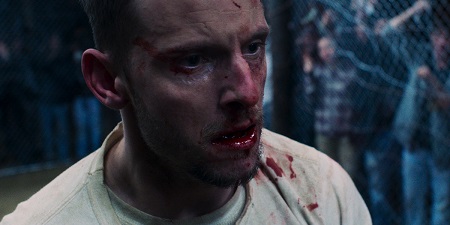 In the spirit of full disclosure, I wasn’t certain I liked Sutton’s film when it came to an end. The last 15 minutes are a serious punch to the gut that left me reeling, and while the outcome wasn’t unexpected, that didn’t make what transpired any more palatable. But I couldn’t get any of what I just saw out of my head for hours after I had viewed it, the final bits of dialogue coupled with a haunting fade to blank left me with lots to mull over and contemplate. Donnybrook matters because it doesn’t hesitate to speak truth to power in ways that go from unpleasant to unbearable in the blink of an eye. It is a timely parable of life’s indignities that cuts right to the marrow, its pugilistic nightmares universal in their all-encompassing emotional magnitude.”

Donnybrook is great. It gets better and better with each viewing, and Bell gives one of the year’s finest, most fiercely internalized performances. While all the pieces don’t necessarily fit together as nicely as I’d like them to, I’m starting to think that’s the point. Tim Sutton’s adaptation of Frank Bill’s book is notable for a number of reasons, discovering them all for one’s self a hypnotic pugilistic treat I hope audiences take the time to step into the ring and endure.

There’s nothing peaceful or calm about Donnybrook, the darkness Tim Sutton’s film so intimately explores overflowing in a profound sadness that only grows in resonance as events build to their lethally tragic conclusion. While not a film for everyone, adventurous audiences looking to dive into stories guaranteed to make them uncomfortable and to think about people, places and situations well outside their personal comfort zones owe it to themselves to give this rugged adaptation of Frank Bill’s book an immediate look.