I get why director Stephen Daldry and screenwriter Eric Roth’s adaptation of Jonathan Safran Foer’s Extremely Loud & Incredibly Close has polarized critics and has left audiences in New York and Los Angeles on both sides of the love/hate divide. The movie’s singular point of view, the vessel it uses to tell its tale, the voice leading viewers onward, all of those elements aren’t exactly genteel or inviting, and add that to the fact the film deals rather directly with the emotional aftermath of 9/11 and the combination isn’t particularly welcoming. 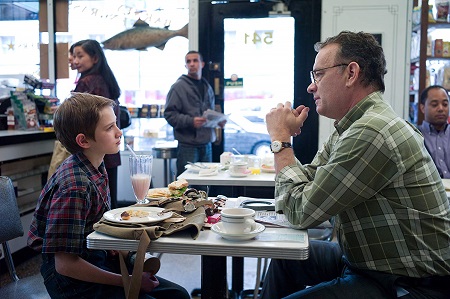 All three of Daldry’s films (Billy Elliot, The Hours, The Reader) have earned Best Picture and Best Director Academy Award nominations. What about Extremely Loud & Incredibly Close? I think it’s the filmmaker’s most daring effort yet, and whether he ends up going four-for-four on the Oscar front (I personally don’t think he will) that doesn’t I still didn’t love his latest with every ounce of my heart.

The story revolves around Oskar Schell (newcomer Thomas Horn), an 11-year-old New Yorker who was once tested for Asperger’s and even though they came back as inconclusive his forthright nature, his compulsion to say whatever it is that’s on his mind and his aversion to being touched make him difficult to be around. It’s been a year since he lost his father Thomas (Tom Hanks) on what he dubs, “The Worst Day,” and to say he’s still struggling to make sense of the loss is an obvious understatement.

Thomas did all he could think of to force his son to communicate with people. He’d set up scavenger hunts that would require him to interact with strangers, quests that would put him out into the world and force him to face his fear of interpersonal relationships. So when Oskar discovers a mysterious key in his father’s belongings, a key in a small brown envelope labeled “Black,” he’s sure it is the final challenge his dad wanted him to overcome, positive the discovery of where this key belongs will help him put meaning to his father’s death.

Oskar is not an easy kid to like. He’s forceful and direct. He has troubles dealing with his emotions. He screams some pretty horrific things at his mother Linda (Sandra Bullock), and while one wants to believe the child doesn’t mean them considering his condition I was never 100-percent certain of that. He’s aggravating and annoying for the majority of the picture, so sitting with him for a full 129 minutes is hardly a walk in the park.

But by presenting a character such as this as the protagonist it forced me to take stock of the actual emotionalism of his quest, about the way people related to both him and to the collective grief all of New York was still feeling a year after the unspeakable events that occurred on Oskar’s so-called Worst Day. I connected to it almost immediately, and as the story built, as those like the mysteriously silent renter (Max Von Sydow) living in his grandmother’s (Zoe Caldwell) apartment complex across the street come into the boy’s spectrum, I couldn’t help but be struck by the directness of his query.

This is potentially the most dynamic and multifaceted script Roth has written since The Insider, free of much of the pandering and saccharine that colored his otherwise excellent, somewhat thematically similar work on Forrest Gump and The Curious Case of Benjamin Button. His ability to connect to the simplicity of Oskar’s journey, to strip away the fat, it really affected me, the final climactic moments having an intimate potency that shook me to my core.

As for Daldry’s direction, for a story that easily could have drowned in treacle and in melodrama the lightness of his touch is astonishing. I loved his use of quiet, how he utilized distance and time to let the emotion of the moment sink in, only utilizing Alexandre Desplat’s (The King’s Speech) exquisite score when necessary. Combined with the great Chris Menges’ (The Killing Fields) stunning cinematography, the visuals have the allure of a childlike dream on the verge of a nightmare, everything coming together in a captivating manner that held me spellbound. 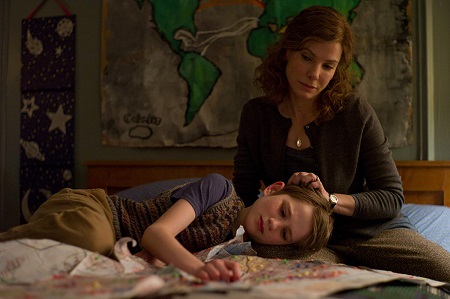 Some will decry Horn’s performance but I think that’s unfair as he delivers exactly what Daldry and the story require of him. It’s the character who is difficult to be around, his affliction that uncomfortably annoys. But what he’s after? What he’s offering those he comes into contact with? That is universal. That is heartfelt. For me Horn nails these elements, excels at making them screech to the heavens with agonizingly furious beauty.

The movie builds to a point I’d rather not ruin save to say it centers on a meeting between Oskar and an enigmatic businessman played by Jeffrey Wright (who is phenomenal). This is the moment where all the themes collide, where everything the movie has been talking about comes into the glorious light of day. Truth isn’t always certainty, the solution doesn’t always hold meaning, but love can be found in even the most enigmatic of corners, and what at first looks like failure can lead to reconciliation between mother and son that is nothing less than victorious.

I won’t say Extremely Loud & Incredibly Close is perfect but I will say I adored and loved it with all my being nonetheless. This is the type of film that might take a while to catch on with the masses, might need more years to marinate in the psyche before it breaks through as the instant classic I suspect it might be, my euphoria for Daldry’s latest virtually without end.