Shae (Danielle Panabaker) isn’t having the best of days. Her boyfriend Terry (Andrew Howard) has just broken up with her, saying he’s seen the error of his ways and must begin being a better husband to his wife and father to his child. While Shae knew he was married, Terry had been saying they were on the verge of separation for ages, the college student had no idea he had a kid as well, that fact alone making it hard to be too upset with him knowing that his reasons for trying to salvage his marriage have everything to do with that. 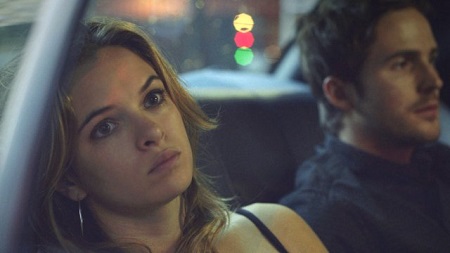 Yet she is still understandably depressed, something that is readily apparent to Lu (Nicole LaLiberte), a fellow bartender at the local New York club the two of them both work. Even though they’re not exactly friends, she manages to convince Shae to venture out into the night with her, the pair of young sexy things picking up a trio of relatively handsome men while having way too much to drink in the process.

That’s the initial setup for Girls Against Boys, the third directorial effort for XX/XY and August filmmaker Austin Chick. What follows next is surreal to say the least, disturbing to go even further and borderline disgusting if we dare to travel a little much farther afield than that. These two, Shae and Lu, end up striking up a wickedly unsettling bond of mutual trust and friendship that leads to a kind of brutality and bloodshed that’s as shocking as it is, in its own way, cathartic. But chaos and carnage are not the best grounds to develop lasting bonds, and when one woman begins to realize exactly what it is their mutual immorality has led to it goes without saying the other has developed a symbiotic bond with her new partner that’s dangerously lethal.

I want to label Chick’s latest an exploitation film, but for numerous reasons I can’t seem to go that particular genre route. While there is a rape, while there is bloodshed, while retribution happens, the horrific extremes Shae and Lu ascend to are startling to say the least. It’s almost as if someone decided to take Death Wish, The Brave One, I Spit on Your Grave and Single White Female and graft them all together, the writer/director mixing plot strands and tangents from any number of similarly themed features yet somehow finding a way to make them uniquely his own.

Needless to say, this will not be a pleasant experience for everyone. The first kill is shocking in its ruthless normality, while a later dismemberment had me clutching my armrests so tightly I worried I was going to break a finger. As things progress and Shae and Lu plunge even further down the rabbit hole the fact the latter starts making judgment calls against men undeserving of her eviscerating venom becomes harder and harder to endure, everything leading to a college party killing that practically broke my heart.

Why is this happening? What are the reasons? Why is so easy for Shae to fall under Lu’s spell while, conversely, what is the she sees in her mousy coworker that ends up engendering such a ruthless need to protect her? Most importantly, how is it neither of them are caught and why doesn’t their murderous spree end up plastered all over the news? These questions, by and large, are never asked let alone answered, and those stuck on any single one of them will be unwilling or unable to follow the story all the way through to its almost inevitable conclusion. 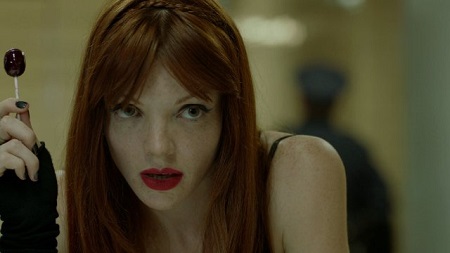 While I did wonder about every single one of those items, especially after the pair spend the night at a countryside hotel with their stolen vehicle parked in the lot for all the world to see, oddly I became so captivated by the spell Chick was casting the majority of me let most of those worries and queries go. I was captivated by the dreamlike spell of it all, enthralled by the mysterious nature of Shae descent, and by the time events reached their zenith there was a David Lynch-like ambiguity to everything forcing me analyze whether or not everything I had just witnessed was real, a dream or a figment of our leading lady’s fragmented imagination.

Don’t misunderstand, Mulholland Dr. or Inland Empire this movie most certainly is not. Chick is too obvious and heavy-handed in his staging of events for that to be true, and as elegant as many of the images are it’s not like I didn’t know where most of this was going or how it was probably all going to turn out. Sure the final image is something close to extraordinary but not so much so it makes up for any of the film’s more obvious shortcomings, the director’s reach not coming close to equaling his somewhat shortsighted grasp.

Still, I watched Girls Against Boys twice, found myself mesmerized by both Panabaker and LaLiberte’s performances  and was pleasantly pleased by the almost gruesome audacity on the part of the filmmaker to take these feminist firebrands on such an explosively debauched ride. The movie certainly won’t win a lot of fans, but those it does manufacture are sure to be passionate, and it’s likely this will end up being something of a minor cult sensation growing in esteem as more adventuresome eyes are slowly drawn its way.