The community of Erin Island, a secluded township right off the coast of Ireland, has got a problem. Turns out a recent meteor strike in the ocean brought with it a couple of carnivorous visitors, a pair of alien squid-like intruders looking to set up a homestead using the inhabitants residing there as their chief source of food. 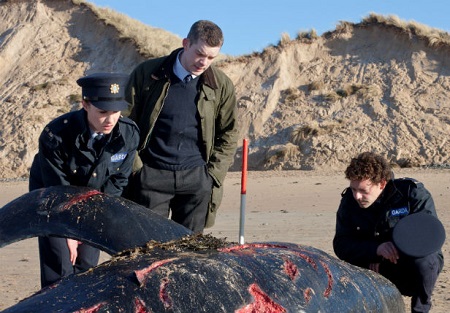 Thankfully, they have one major weakness, and local constable Garda Ciarán O’Shea (Richard Coyle) and his visiting from the mainland partner Garda Lisa Nolan (Ruth Bradley) have somehow stumbled upon it. Turns out, these invaders don’t like the taste of alcohol, in fact it’s downright lethal to them. Knowing they need to survive the night, with the aid of country doctor Adam Smith (Russell Tovey), local drunkard Paddy Barrett (Lalor Roddy) and pub owner Brian Maher (David Pearse), it’s up to them to get the citizens of Erin Island royally hammered, the only thing standing between them and being torn limb-from-limb whether or not the beer taps don’t run dry.

The influences inspiring the imaginative import Grabbers are by all accounts obvious. One part Jaws, another Gremlins, a dash of Tremors, An American Werewolf in London and the original Piranha, the movie is a delightfully hysterical creature feature made in a deliciously old school style. Directed with whimsically audacious precision by Jon Wright (Tormented), featuring a crackerjack, and surprisingly intelligent, script by newcomer Kevin Lehane, the movie is a stupendously entertaining hoot start to finish, and by the time it was over all I wanted to do was start the darn thing over from the beginning and watch it again.

Seriously. It’s that good. The characters, namely O’Shea and Nolan, are well drawn and believable, the way people react when the truth is slowly revealed is shockingly authentic and the way things build towards their suitably, and lethally, explosive conclusion is surprisingly natural. Lehane’s script covers its bases and leaves very few stones unturned, allowing for wonderful beats of character-driven comedy which in turn enables things to resonate on an emotional level that’s downright inspiring.

It’s all pretty silly, sure, but that doesn’t make what’s happening any less fun. Wright keeps the action moving at its own perfectly measured pace, picking up the speed when required while also slowing things down when needed in order for the characters to put the pieces together as well as connect with one another allowing their collective plight to have a bit greater significance. There are subtle bits of social commentary sprinkled throughout recalling a bit what Joe Dante and John Sayles were able to accomplish with the micro-budgeted Piranha, the general focus remaining pinpointed on the two police officers and their evolving relationship just as it should be.

Coyle is terrific. Best known for British series like “Coupling” and “The Whistleblowers,” he appears to be having a grand time inhabiting the drunken hero who finds he’s the one who has to remain sober when it’s time for the rest of the town to go on their own alcoholic binge. He never shies away from his characters flaws while at the same time eloquently showcases the heroic humanity dwelling within, making his transformation from pitiable reprobate to selfless crusader that much easier to stomach.

As good as he is, though, it’s Bradley who ends up stealing just about every scene she’s a part of. So memorable during her two season stint on “Primeval,” I can’t say I was remotely prepared for what the actress was going to unleash here. Watching her prim and proper Garda descend into a drunken stupor all in the name of law and order is rather glorious, her comedic timing close to spectacular as is her willingness to throw in dramatic traumas giving her character extra dimensions the script itself only hints at. She’s wonderful, going above and beyond the material, her chemistry with Coyle as magnetically inspiring as anything I’ve been blessed to witness so far this year.

It’s easy to get annoyed by the majority of creature features filling television screens and overwhelming Blu-ray and DVD shelves nowadays. When something as disastrously annoying as Sharknado garners all the headlines and overwhelms social media one almost assumes every similar enterprise will be just as uninspiring and bottom of the barrel. It’s like all the thought goes into the title and the concept but not into the finished film itself, the state of B-grade marauding monster-filled terror sadly speaking for itself.

Grabbers reverses that trend and then some, Wright and Lehane’s ingeniously entertaining opus reinvigorating the genre in ways talents as diverse as Dante, John Landis, Ron Underwood, Tom Holland and a whole litany of others would be more than proud of. A zany, unhinged hoot all the way through, this is as great as these sorts of things come, and as longtime fan of the genre I can’t wait to add this movie to my personal collection and watch it again and again at my own jubilantly wide-eyed leisure.