Jim Terrier (Sean Penn) is a mercenary working for a humanitarian concern in the Congo. He’s in love with aid worker Annie (Jasmine Trinca), the beautiful doctor stealing his heart and making him realize there’s more to the world than bloodshed, violence and death. But things are hardly what they seem, and when Jim’s real reason for being in the African nation is revealed, he’s forced to leave, unable to let his beloved know what has happened, let alone say goodbye.

Fast-forward eight years. No longer a hired gun, Jim is back in the Congo attempting to put past demons to rest, helping build wells and set up health care clinics in the country’s poorest neighborhoods. Thinking his violent days are behind him, three men show up at his latest work site with orders to put the former mercenary in the ground, their reasons for doing so tied to what happened almost a decade past. Determined to find out who wants him dead and why, Jim is thrust back into action, uncovering a global conspiracy that threatens, not only his own life, but also that of the woman he loved and lost not so long ago.

For all its Taken meets The Bourne Identity meets The Constant Gardener machismo, the action-thriller The Gunman is nowhere near as convoluted or as complicated as it sets itself up to be. Based on the novel by Jean-Patrick Manchette, sporting a script co-written by Don MacPherson (Absolute Beginners), Pete Travis (Dredd) and Penn himself (who also produces), the film is a relatively straightforward bit of corporate skullduggery, the reasons Jim is in trouble having more to do with profit margins and stock prices than they do even slightly anything else. 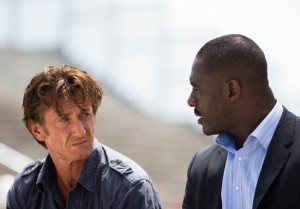 Be that as it may, the film is frustratingly uneven, so tonally unbalanced it’s hard to figure out what it is exactly Penn and his director Pierre Morel (District B13, Taken) are going for. If they are attempting to shine a light on the situation in the Congo and other African nations, the surrounding elements concerning Jim and his plans to extricate himself from his situation are too silly and melodramatic for the viewer to take said attempts seriously. On the other hand, if they were just setting out to craft a simple, B-grade international thriller then the fact they’ve stuffed things with so much social commentary makes giving into the pyrotechnics and fisticuffs exceedingly tough. The film is so all over the map maintaining interest in the outcome becomes increasingly difficult as events escalate, the disjointed and haphazard state of the narrative a gigantic stumbling block impossible for the filmmakers to overcome.

It doesn’t help that every single actor comes across as if they’re appearing in a different motion picture than their costars. Worse, they’re all giving good performances, just not ones that fit in the same world as any of the other actors. Penn is all business, so deathly serious you feel like the fate of the world is riding on his ability to hit the target. Ray Winstone pops up as Jim’s most trusted friend, a rolling boilerplate of British sarcasm and wit who is quick with a quip even if his advice is strictly by-the-numbers. Idris Elba is in full-on “Luther” mode, the talented actor a charming Interpol agent who seems to be on hand only when the script runs out of options and needs someone to supply a fresh infusion of energy.

Then there is Javier Bardem. The Oscar-winner is in manic overdrive, portraying a former confidant of Jim’s who not only instigated the mission that got him sent out of the Congo in the first place, but also happens to be the guy the mercenary tasked with taking care of Annie for him. He’s out of control, freewheeling his way through things with uninhibited, bordering on cartoonish, abandon. Bardem is all swagger and braggadocio, everything hiding insecurities and misgivings that have led to the situation Jim now finds himself in. He’s a hoot, his performance building in eccentric intensity every step of the way, his absence unavoidably felt whenever he isn’t around.

Morel knows action, no argument from me on that front, and I did appreciate how every set piece is driven more by the evolution of the main character than it is anything else. But the actual dramatics fueling things, the dynamics propelling events forward, all of that is tiresome, caring about what happens to Jim and discovering whether or not he and Annie are going to make it out alive hardly worth the worry. Throw in an idiotic subplot involving PTSD and traumatic brain injuries and the narrative becomes so scattershot keeping track of what’s happening and why is an outright impossibility.

It’s hard for me to dismiss the film entirely. There’s a nifty sequence involving a booby-trapped door, Jim’s handling of it and two thugs who can’t keep themselves from wanting to discover how it is he didn’t manage to blow himself up, while an assault on a Spanish villa by a team of assassins is expertly staged to be sure. But The Gunman is too serious to work as giddy action pulp and too stupid to resonate as a ticking clock drama and as such it’s nothing more than an unfortunate misfire that utterly fails to satisfy.