I’m not going to try and say Brett Ratner’s (Rush Hour, Tower Heist) take on Hercules is completely worthless. The production values are high, it’s gorgeously shot by Dante Spinotti (The Insider), features top-notch visual effects and is agreeably – if rambunctiously – scored by composer Fernando Velázquez (Mama). More than that, it is phenomenally well cast, not just in its star Dwayne Johnson as the title character but also in regards to the internationally flavored supporting cast featuring a bevy of familiar faces and relative newcomers alike.

Problem is, as a movie, as a self-contained story, as a narrative worth getting excited about and a spectacle that manages to make the blood race with electrifying magnetism, Hercules fails at virtually every turn. It’s plodding. It’s dramatically tedious. It’s unforgivably cliché. But, more than anything else, it’s borderline pointless, not a single thing of merit or of note taking place everything happening with a ho-hum banality that gets more than a little irksome as things laboriously progress.

The film takes its cues from the Radical Comic of the same name by Steve Moore, screenwriters Ryan J. Condal and Evan Spiliotopoulos (Battle for Terra)adapting it for the screen. Admittedly unfamiliar with the source material, all the same I can’t help but feel like the two have unintentionally ripped the guts out of Moore’s take on the classic myth, everything proceeding with a leaden sterility that’s more often than not downright annoying. There’s not a single new element on display, and as handsomely as the majority of the material is presented feeling anything close to an emotional attachment to the hero’s story or the events taking place is next to impossible.

I do like how the film tries to bend the legend into something human, something tangible, in some ways attempting to be a mythological variation on The Man Who Shot Liberty Valance showing how myth becomes truth and fiction can transform a man of a flesh and blood into an almost god-like legend. There is a wee bit of fun to be found in how Hercules’ fabled labors are reinterpreted. More than that, it’s interesting to see who their larger-than-life status affects the common soldier, the power and confidence they grant intriguing if not suitably palpable. 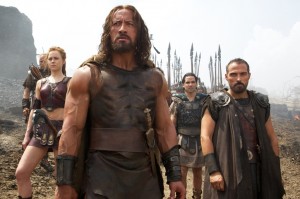 But all the same, I simply did not care about Hercules or his struggles, had little interest whether he and his ragtag team of fellow mercenaries would meet with success and thus save a kingdom from tyrannical rule. More, I couldn’t help but scratch my head at just how stupid he and his compatriots were acting, the truth behind the real evil pulling the behind-the-scenes string clear from the get-go. Throw in a third act appearance by a final duplicitous charlatan that comes out of nowhere and is as dumb as it is forgone and the whole thing is a head-scratching failure of the first degree. There’s nothing to get excited about and even less to be interested in, the only question for me being whether or not I’d manage to stay awake all the way until the end even though the film features a pleasantly brief 98-minute running time.

The plot? Hercules and his team (which includes Rufus Sewell, Ian McShane and Headhunters star Aksel Hennie) agree to train the army of the Thracian Lord Cotys (John Hurt) in his fight against the powerful Rhesus (Tobias Santelmann), his forces apparently laying waste to the surrounding lands with his eyes set on conquering the capital. During the campaign the warrior learns much about himself and what true heroism ultimately entails, everything building to feats of strengths and courage with the potential power to free a troubled land from the rule of a despotic blood-thirsty leader.

All of which could have been fine had it all not felt so rudimentary and way too familiar. There are training montages, rousing speeches and many instances of astonishing daring-do yet none of it gets the pulse racing in a way that’s even slightly noticeable. More than that, it all builds to a clunky, ham-fisted conclusion that feels ripped from a half-a-dozen other fantasy-adventures, not a single second standing out in a way that could be construed as even faintly memorable.

Johnson tries, as does the rest of the cast, and I can’t say there isn’t potential to be found in the seeds of the story that can be traced back to Moore’s apparently much-lauded comic book. But as good as Ratner is at staging sequences of massive action, and he’s quite good indeed, that doesn’t mean he’s ended up making a film I could give one whole heck of a lot about one way or another. Hercules isn’t the worst movie I’ve seen this year, it’s not even the worst one featuring this particular character, but that doesn’t make it any more worthwhile, and as such it’s doubtful I’m going to be thinking about it again anytime soon.