Fascinating Imitation an Intimate Examination of Self

The Imitation Game chronicles a pivotal period in the life and times of famed mathematician and cryptanalyst Alan Turing (Benedict Cumberbatch). During the early days of WWII, the brilliant and self-possessed scientist goes to Bletchley Park in Buckinghamshire, England to solve the puzzle of all puzzles, eagerly getting himself on the team of analysts tasked with cracking the German’s main coding device given the nickname “Enigma.” He instantly sets himself apart from the rest of unit by looking at the problem from angles none of the others understand, naval Commander Alastair Denniston (Charles Dance) tiring of his antics to the point he’s considering firing the man. 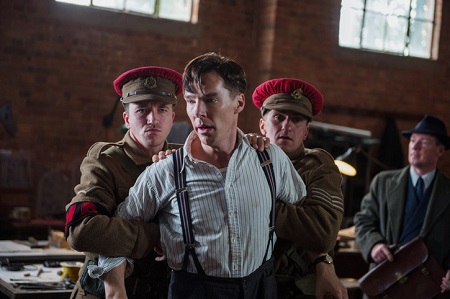 We know the Enigma was cracked by the Bletchley Park team. We know Turing was not dismissed by Commander Denniston. We also know that his accomplishments during WWII broke unparalleled ground and as such the mathematician is widely considered the father of the modern computer. It is then equally safe to assume it will be his plan to crack the supposedly uncrackable German coding machine that will be the one the small group of scientists and codebreakers will follow.

But what of the rest of his life? Why was Turing the way he was? What was he hiding? Was he hiding? And, ultimately, was a lifetime devoted to solving unsolvable puzzles so all-encompassing it kept him from putting the pieces of his own life together, which maybe would have kept him from ending things prematurely?

None of what I have written is a spoiler. The movie tells you the answers to the majority of these questions right at the top, and, let’s be frank; it isn’t like Turing’s accomplishments or his tragic, borderline surreal and bizarre demise aren’t a matter of historical record. Using Andrew Hodges‘ best-selling book Alan Turing: The Enigma as inspiration, screenwriter Graham Moore and director Morten Tyldum (Headhunters) have put together an engrossing, thought-provoking procedural that never quite goes the way you expect it to, allowing the mathematician’s choices and actions to come to life with a rigid, almost anachronistically obtuse matter-of-factness that’s at times remarkable.

In other words, this isn’t your typical Hollywood biopic. In lesser hands, Turing’s sexuality would be front and center; it would be all that the movie was about. It would present the horrific circumstances of his outing, subsequent incarceration and eventual suicide as the be-all and end-all to the tale. It would attempt to tell you that being homosexual and attempting to hide that from everyone was the central facet around which everything else in his life revolved.

But Tyldum and Moore are far more interested in digging deeper. A human being is more than a single thing, and while parts of a person’s life do exert a heavy toll upon the rest of it, at the same time it isn’t like the majority of us can’t still pull our focus in multiple directions depending on desire or mood. If anything, the pair gloriously showcase Turing as the genius he is justifiably lauded to have been. Prickly. Self-centered. Obsessed with his own ideas. This was a man who was driven to do the unthinkable and, once doing so, immediately understood the tragic ramifications of the accomplishment. He treated his duties during WWII with deathly seriousness, comprehending full well what he and his team’s decisions meant to the Allied soldiers on the ground, weighing their life and death as they pertained to the outcome of the war every hour of every day once the Enigma was decoded.

Not that this approach makes watching The Imitation Game easy. Turing is frustratingly hard to warm to, his relationship with the Bletchley Park team, including female member and lone friend Joan Clarke (Keira Knightley), as frigid and as obtuse as it is awkward and underdeveloped. All of these sequences chronicling Turing’s inventing of a machine to crack the Enigma bristle with suspense and electricity, but they are not emotional, not prone to connecting in anything close to a melodramatic way, and as such it is easy to feel as if one is at arm’s length to the inherent drama bountiful in all of the situations he and his team find themselves facing.

It does not help that the framing device utilized to tell the Bletchley Park central story is a bit hackneyed, too awkward, the filmmakers flashing both forward (to a detective inadvertently uncovering Turing’s sexual secrets) and backwards (looking at the future mathematician’s bullied schoolboy days) rather haphazardly. More than that, these sequences contain just the type of melodrama the rest of the picture is devoid of, spelling things out in such an obvious fashion it is almost as if neither Tyldum nor Moore felt the viewer would be able to put all the dots connecting all of Turing’s sides together for themselves otherwise.

This frustration with these portions of the film aside, by and large The Imitation Game is an engrossing look at genius unlike few we have seen before. It allows star Cumberbatch the freedom to make Turing what he will, letting him remain prickly and uncomfortable in his own skin even as he zeroes in on a success that would turn the tide of WWII decisively in the direction of the Allies. The actor shades things with constantly evolving eloquence, never doing what is expected, continually keeping me wondering what he was going to do next. He allows Turing’s secrets to come out devoid of artifice, refusing to pander in any way whatsoever, and as such crafts a character of such massive dimensionality the overall effect is astonishing. 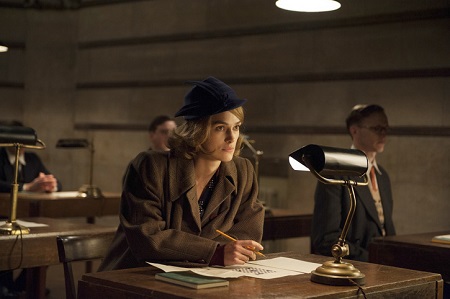 Could the movie be better? Do I think it works near as well as Tyldum and Moore want it to? No, not really, the supporting players remaining relatively one-note throughout, never really going through any sort of true metamorphosis save for one key moment when the Bletchley Park team realizes what successfully cracking the Enigma code means for them all. Additionally, I just don’t think those framing sequences are as strong as the core of the motion picture they inelegantly surround, and by and large I was not nearly as satisfied with them as I was with the majority of everything else.

But Cumberbatch is incredible, deserving of every award nomination and accolade certain to come his way. On top of that, when the movie spends time analyzing Turing during these WWII days, what it shows during this pivotal time in history, it speaks to a broad swath of subjects that are intimately realized. The Imitation Game is a character study masquerading as a thriller, ultimately asking the viewer to look inside themselves and analyze pieces of their own physical and mental makeup all of which border on the profound.