As of right now, it is likely Christopher Nolan is the only big time director working in Hollywoodthat would have anything close to the clout to convince a studio (in this case two, Paramount and Warner Bros) to finance a monstrously expensive, hugely ambitious science fiction spectacle the shape and size of Interstellar. The Inception and The Dark Knight hit-maker is a populist entertainer in the Steven Spielberg mold yet one not content to craft gargantuan thrill rides unless they have additional weight and meaning grounded in an authentic, real world esthetic. He wants his audiences to think about what they’re watching while they also gleefully wallow in the eye-popping cinematic wizardry, attempting to have his cake and eat it while also making extra helpings for all of those he’s anticipating will come to the party.

In the case of this 169-minute 2001: A Space Odyssey meets Close Encounters of the Third Kind meets Contact epic, it is likely Nolan’s reach exceeded his grasp, much of this otherworldly adventure never gelling together in ways that are comfortable or satisfying. Yet Interstellar is unabashedly thrilling, euphoric and mesmerizing in ways so many of today’s big budget studio tentpoles wish to be yet so seldom are. It is an unabashedly human spectacle more concerned about the whims and the wants of the heart than it is the dystopian Armageddon visions the central narrative revolves around, a single father so driven to return to his daughter from the furthest reaches of the Universe he’ll bend space and time to do just that.

In the very near future, the Earth is in its death throes. Cooper (Matthew McConaughey), a former NASA pilot who ended up having to become a farmer after the space program was ended by the government, is content to see his eldest son Tom (Timothée Chalamet) follow in his corn-growing footsteps. But daughter Murph (Mackenzie Foy)? She’s smart well beyond her adolescent years, and although the school district is upset about some of her antics – like telling her fellow classmates the Apollo Missions and the moon landings were real and not pieces of government propaganda used to help bankrupt the Russians during the Cold War – he couldn’t be more pleased.

For reasons that shouldn’t be gone into in any sort of detail, Cooper and Murph end up learning NASA isn’t as defunct as everyone thinks. More, they want their former pilot back, need him to spearhead a mission that could very well lead to the survival of the human race. But saying yes won’t just take a father away from his children; it likely means he’ll never set eyes upon them again. Or, if he does, thanks to the time-bending laws of interstellar travel he’ll more than likely be years younger upon his return to Earth then either of his kids will be.

From thus springs the adventure, Nolan and his frequent screenwriting collaborator younger brother Jonathan fashioning a scientifically-based journey to the furthest reaches of the galaxy where Worm Holes occur, synchronicities transform hours into years and Black Holes are doorways to secrets never before imagined. It’s fascinating and frustrating, oftentimes both at the same time, the film traveling from planet to planet, plane to plane and realm to realm for reasons it keeps close to its vest yet never are as clever or as imaginative as I can only think the filmmakers intend.

At no point was I bored. At no time did I want to be anywhere else but sitting in my IMAX theater seat taking in this massive 70mm spectacle attempting to reconcile its genius with its shortcomings. The film is a fascinating, enthralling mess, the director so confident in his vision as unwieldy as all of the plot mechanics and narrative monkeyshines might appear at no point did they come across as anything other than exactly what Nolan intended. 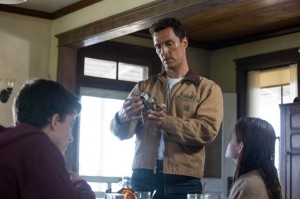 That does not mean the film’s faults are then easy to overlook. Quite the opposite. Entire plot strands are difficult to follow not so much because Interstellar doesn’t deliver their nuances and their intimacies in detail but because expository dialogue is crushed to unintelligible nonsense thanks to an oppressive sound design that makes hearing strands of what characters are saying problematic. Sometimes this isn’t that big a deal, the visuals more than enough to lead us to where we need to be. Others, these moments aren’t just frustrating, they’re downright upsetting, a climactic, incredibly important final declaration delivered with heartfelt passion by Ellen Burstyn lost underneath the cacophonous roars of the sound effects and the screaming church organ traumata of Hans Zimmer’s (Rush) thunderous score.

Then there are pieces of the plot mechanics themselves. There are times were I felt I was watching nothing more than an oddly self-important remake of Robert Zemeckis’ Contact (which, maybe coincidentally, maybe not, also starred McConaughey), the central conceit just as familial in basis and in overall heft as that 1997 effort. As for Cooper’s relationship with his kids, the fact he’s so obsessed with Murph but seemingly indifferent to Tom downright strange, making the latter’s adult transformation (portrayed by Casey Affleck as best he can) into a bit of a clueless stick in the mud all the more  perplexing.

Most bizarre is an all-import third act arc concerning the lone survivor of a previous expedition whose antics feel engineered and false. It’s as if he becomes a villain not so much because circumstance and situation has conspired to make him so (which, make no mistake, it easily could have) but more because if he doesn’t go down a homicidal rabbit hole Cooper’s climactic realizations never could take place. There’s silly skirmish between astronauts that looks like something out of a bad student film, so unintentionally laughable the inherent dramatics of the underlying acts fueling this altercation lost inside the nonsense.

Yet, without this moment the movie’s most thrilling, eye-popping set piece never could have taken place. For all that’s wrong during this portion Nolan’s insistence on making sure everything stays character centric is undeniably laudable. Additionally, it isn’t like I didn’t understand the reasoning behind what transpired, the emotional upheaval and unrelenting isolation this character had been through turning them into something of a flesh and blood HAL 9000, reasoning and logic giving way to unspeakable violence while lead to horrific consequences. 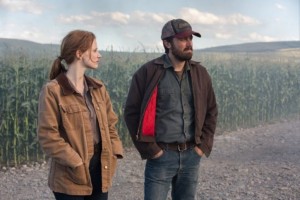 The acting is universally solid, McConaughey anchoring things with a tangy, homespun gravitas I couldn’t have resisted even if I had wanted to. Anne Hathaway has some marvelous moments as a fellow astronaut who engages Cooper in some of his most heated scientific arguments, managing her way around a few risibly silly bits of dialogue about the heart’s longings and love’s grasp on rational thought with graceful eloquence. Both Wes Bentley and David Gyasi round out the central quartet of interplanetary explorers nicely, the latter in particular having a stunning moment of graceful, heartrending horror as the full weight of what it is the team is facing comes into focus as a handful of hours for two astronauts transforms into two-plus decades of loneliness for him.

But it is Jessica Chastain who ends up being the most memorable piece of the ensemble (which also includes Michael Caine, John Lithgow, Topher Grace, David Oyelowo and William Devane), her character’s arc and interior motivations having the most emotive heft weight. While all the principals allow their emotions to affect their reasoning, for her they are a vital cog that leads to great understanding and, in the end, intellectual kismet. She’s spellbinding, her fury giving way to horror giving way to happiness giving way to forgiveness, all of it leading to greater interpretations of the Universe and its infinite mysteries that are close to sublime.

I love that Nolan isn’t content to rest on his laurels. I like that he’s reaching for the stars. I adore that his visual sensibilities are classical in design and construct yet still feel freshly vital and a distinctive part of modern cinematic language. He allows cinematographer Hoyte Van Hoytema (Her) to craft images that are instantly iconic, he and Nolan moving between varying aspect ratios and film stocks with dizzying, beautifully refined eloquence.

But for all of the highs found inside of Interstellar (a pair of sentient black monolith shaped robots voiced by Bill Irwin and Josh Stewart are a continual joy), its misses are still far too obvious to be easily dismissed. The film is not to be avoided, that is for certain. Yet even so it is just as likely to leave viewers marginally unsatisfied, its miscalculations just as stunning as its triumphs making it a somewhat peculiar sci-fi extravaganza that’s ultimately difficult to embrace no matter how hard one would like to.