Fiery Devil’s Island an Icy Drama of Resilience and Resolve

Located on the Oslo fjord lies a home for delinquent youth, ages 11 to 18, in Bastøy. Run with an iron fist by the ruthless warden Bestyreren (Stellan Skarsgård), the place is a model of senseless brutality where all those in charge seem driven to make their charges suffer for their perceived crimes, no matter how large or small. They will have justice. They will produce respect. They will change these youngsters’ lives for the better. Or, if not, they will break them into tiny, emotionally-scarred pieces reducing their supposed threat to society to nil. 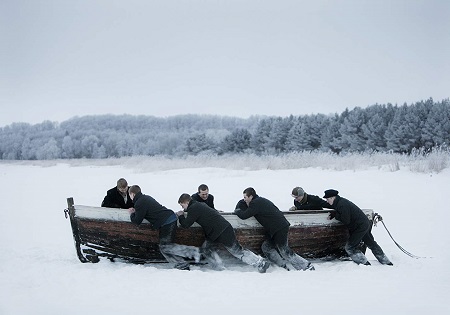 At least, that’s what they think they are doing. New inmate Erling (Benjamin Helstad) sees the hypocrisy in all this right away, even if at first his doing so comes from a purely selfish place embedded in his own haughty feelings of superiority. Driven to escape, a shocking tragedy changes everything for the teenager, transforming him into a leader the rest of the boys in the home look up to. Realizing he has more to protect than just himself, Erling stages a violent uprising against Bestyreren and his subordinates, his and the other’s collective actions leading to the arrival of 150 Norwegian soldiers with orders to quell this rebellion as quickly as they can.

On the surface King of Devil’s Island is a motion picture we’ve seen many times before, something of an early 20th century Norwegian Taps only instead of young cadets staging a revolt you have incarcerated troubled boys just doing what they can to survive. Like If…, they are led by a charismatic charmer who initially seems to be out only for himself. Like a silly B-movie in the vein of Toy Soldiers, they are faced with an armed opposition unafraid to let bullets fly causing all sorts of deathly havoc.

But all of that aside, director Marius Holst does a splendid job of crafting a scenario and creating a world that is viscerally bracing in its frigid emotional bareness. We are transported with shocking immediacy into the Bastøy school, this prison for delinquents that purports to want to bring out the best in their charges but in reality doesn’t care about them at all. The emotions are heightened right from the start, the icy confines of the prison as perilous to the students as it is their jailers roaming the halls.

All this bleakness can be a little overpowering, and early on Erling is such a one-dimensional slob I wasn’t quite sure I’d be able to get behind him and his new mission priorities. But his confrontations with Bestyreren are remarkable, and the event that takes the lad from selfish teen to heroic adult is shockingly effective. Holst builds this tale with precision, his eye always on the endgame, getting to the climax far more of a heart-stopping experience than I thought it was going to be when the movie began.

Skarsgård is his usual wonderful self, and while this isn’t a character he probably struggled portraying watching him do his thing is a joy nonetheless. His Bestyreren is an excellent foil for Erling, the obstacles he keeps setting up for the youngster to overcome made sense from the standpoint of an authoritarian while also suitably curdling the stomach as each tasked played out to conclusion. Skarsgård tackles things with his trademark grizzled resolve, finding intricacies inside the character that likely wouldn’t have existed otherwise.

But it is young Helstad who impressed me the most. Taking an unlikable sieve of a character and transforming him into a selflessly redemptive figure of well-earned triumph, I was absolutely gobsmacked by what it was the actor was doing here. King of Devil’s Island isn’t new, doesn’t offer up very many surprises, but thanks to Skarsgård and Helstad, and in no small part due to Holst’s confident direction, the drama transcended its overfamiliar tropes and transported me into a fiery winter wonderland of despair and resolve I didn’t want to depart from. It’s a grandly human adventure, this Norwegian import a worthy effort mature audience everywhere should take the time to see.