Starting its story in 1926, Lee Daniels’ The Butler covers roughly eight decades of American history, all of it seen through the eyes Cecil Gaines (Forest Whitaker) and inspired by real life White House butler Eugene Allen. In the film, Cecil serves in the White House between 1957 and 1986 providing services for seven different presidential administrations as well as their respective families. He gets married to a hot-tempered family woman, Gloria (Oprah Winfrey), with alcohol issues, has one son, Charlie (Elijah Kelley), go off and fight in Vietnam and an older boy, Louis (David Oyelowo), who will become a central figure in the Civil Rights movement. It’s an awful lot of acreage to cover, many themes and ideas explored, Danny Strong’s (Game Change) script taking an almost Forest Gump-like approach as it watches history fade into the rearview mirror, its central figure passing through with ghostly regality. 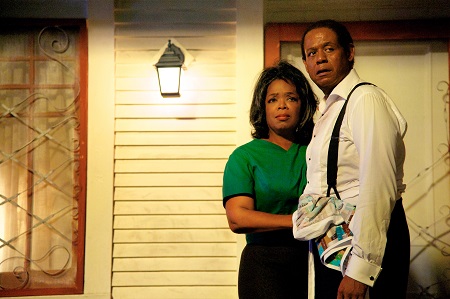 In the hands of a more confident director, one gets the feeling this film could have been something extraordinary. As contrived as many parts of Strong’s script might be (he has Louis right at the forefront of numerous historical events including pivotal moments at a Woolworth lunch counter, on board a Freedom Rider bus, in a hotel room with Martin Luther King, Jr. and during important meetings of the Black Panthers), as short a shrift as it is oftentimes forced to give huge moments of historical significance, the central pieces are solid while it’s protagonist’s point of view is one in most respects audiences can say they’ve likely never encountered before.

But Daniels’ handing of it all tends to be on the heavy-handed side, layering on the melodrama and the soapy musical queues at every turn. Structurally, there is an odd imbalance between Cecil and Louis’ dueling storylines, and while each man’s journeys are of vital importance the way they are intercut together can frequently be haphazard and jarring. The film drags just when it should soar, lags behind just when it should be surging ahead, and on way too frequent an occasion I found myself wishing Daniels would just back off and let the words and emotions layered within the script and the collective talents of the actors on hand speak for themselves.

Be that as it may, The Butler has merit. More than that, it works on a gut-wrenching, intimate, emotionally pure level that is often undeniable. Best of all, the acting is universally excellent, ranging across the board from pretty great to downright Oscar-worthy, this high-powered cast throwing themselves into the proceedings body and soul doing everything they can to give Cecil’s story the resonance it deserves. The film is compulsively watchable, and not once did I want to tear my eyes away from the screen, and while there are missteps aplenty for whatever reason they do not stop the film as a whole from doing almost all it ambitiously sets out to do.

And when I say the cast is high-powered I mean it. John Cusack as Richard Nixon. Robin Williams as Dwight D. Eisenhower. Alan Rickman as Ronald Reagan and Jane Fonda as First Lady Nancy Regan. James Marsden as John F. Kennedy. Liev Schreiber as Lyndon Baines Johnson. Vanessa Redgrave, Clarence Williams III, Mariah Carey, Alex Pettyfer and Terrence Howard all pop up in key supporting roles, while Cuba Gooding Jr. and Lenny Kravitz are given center stage as two fellow White House butlers key to Cecil’s personal and emotional expedition. What’s interesting is that none of them stand out (by and large) in the way you would expect them to, each investing more of themselves into their respective performances than you might otherwise surmise, each going out of their way to add to the proceedings by disappearing into character than distracting from it mostly just from the sheer size of their respective names.

But they’re not the story. Neither is Oyelowo, so good as Louis even if the sheer volume of the critical historical events he finds himself involved with start to slowly push into the realm of the absurd. For that matter, even though he’s in the majority of the scenes, even though he’s the man of the title, Whitaker isn’t the story, either, his performance austere, regal and commanding even if the character as written frustratingly remains on the sketchy side throughout all of the 80-plus years depicted. 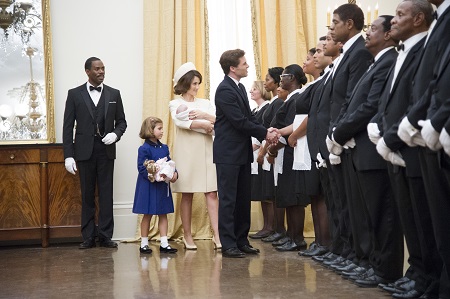 No, the story, the shock, the awe, the whatever else you want to call it, is Winfrey. The empress of all television media hasn’t had a proper acting credit in 15 years, her last showcase on the big screen coming way back in Jonathan Demme’s 1998 adaptation of Beloved. Yet, even with that absence, even as she’s left her talk show and started her own Cable television network, as far as acting talent goes Winfrey seemingly hasn’t lost a step. She makes Gloria a figure to be reckoned with, the actress’ tightly modulated performance a powerhouse of grace, verisimilitude and emotional nuances. Winfrey never does what you expect her to, never gives too much of her hand away, and even when saddled with pounds of old age latex she still burns through the celluloid with a magnetic intensity I found striking.

I can’t help but wonder what might have been. As good a job as Daniels did in regards to casting, as much as his actors seem to love working for and with him, he just doesn’t feel like the right man for the job as far the directorial side of the coin is concerned. The movie makes too many missteps, has far too many editorial blunders, doesn’t know when to pull back and let subtlety rule the day. Precious might have been a homerun for Daniels, but I’m starting to think it might be his only one, and while this film certainly improves upon the laughably mediocre The Paperboy (which, it must be admitted, was also exceedingly well acted) it’s flaws are much too glaring and obvious to be laid aside entirely. Still, thanks to the cast, indebted in some respects to Strong’s intelligently layered script, Lee Daniels’ The Butler is worthy of a look, if only to see Winfrey’s triumphant return in all its spellbinding glory.