I am a fan of musicals. I think both The Band Wagon and Singin’ in the Rain are two of the greatest motion pictures ever made. I watch The Sound of Music religiously each New Year. I thrill to the glories of Cabaret every time I watch it. I find both Moulin Rouge and Chicago to be modern classics. 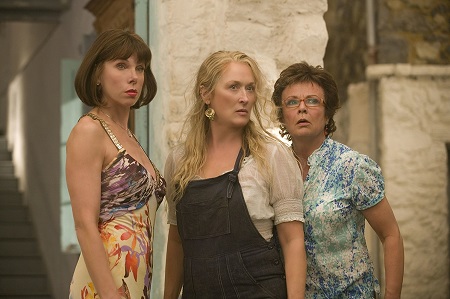 Please understand when I say the film version of the Broadway hit Mamma Mia! is close to being one of the most annoyingly god-awful movie musicals I have ever had the displeasure of trying to endure I really, truly, 110-percent mean it. This thing didn’t just make me uncomfortable and sad, I darn near say it physically assaulted me.

What’s funny about this reaction is that bits and pieces are admittedly kind of impressive. I never realized how profound and sometimes even beautiful some of the songs by 1970’s disco supergroup ABBA were. More, I didn’t think for a moment Mean Girls weathergirl and “Big Love” daughter Amanda Seyfried possessed so much charm or a set of pipes so alive and alluring they could put many of the pop starlets singing today to shame. She’s on the verge of being wonderful, and If I’d enjoyed the movie even a tiny, infinitesimal little bit it’s likely I’d be extolling her virtues with more vociferous passion than I currently am.

But that isn’t going to happen. I simply do not care about the things that work. What does it matter if Christine Baranski can belt out a show tune and steal a May-December production number like no other when the musical she’s doing it in has already pummeled me into a state of catatonic unconsciousness? This is a film that slaps you senseless from the very first frame, the almost Road Runner-like pace so exhausting I wanted to call it quits within the first thirty minutes.

Any project that can take a dynamic virtuoso talent like Meryl Streep and make her look both uncomfortable and embarrassed in the span of a nanosecond has got major problems. One that does the same thing to fellow thespians like Pierce Brosnan (who should never be allowed to sing ever again), Colin Firth, Julie Walters, Stellan Skarsgård and the aforementioned Baranski should be immediately flushed down the toilet never to be heard from again. 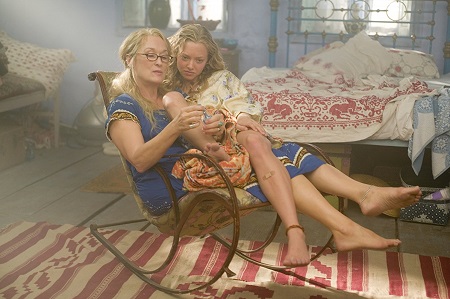 That is Mamma Mia! in a nutshell and for the life of me I can’t fathom how such a thing could ever have been unleashed upon an unsuspecting public. How this worked on the Broadway stage I cannot say (and considering it’s been playing for nearly a decade with no signs of stopping I can only assume it plays pretty well), but as a movie musical it’s all about as enjoyable as pouring sulfuric acid on a bug bite. The adaptation is a constant state of overkill murderously bludgeoning viewers senseless, director Phyllida Lloyd presenting a more is more version of the theatrical smash that paraphrases This is Spinal Tap in making sure the volume remains set at 11 for every one of the musical’s merciless 108 minutes.

Let me put it like this: This is a movie that had me screaming “S.O.S.” right from the start and “I Have a Dream” that slipping down to Hell would be more enjoyable then watching it for second time which means if I had spent any of my hard-earned “Money, Money, Money” on it I would have been royally peeved. “When All is Said and Done,” the only thing that would make me happy is if a picture as bad as Mamma Mia! had the good fortune to meet a box office “Waterloo” befitting its loudly obnoxious crap-tacular style of storytelling ineptitude.