Based on Mary Horton’s family literary marvel The Borrowers, the latest effort from Studio Ghibli The Secret World of Arrietty is the first non-Hayao Miyazaki directed effort I can honestly say I think comes close to being perfect. With a screenplay co-written by the Spirited Away and Princess Mononoke genius, this sparkling adaptation transcends culture and ethnicity to become instantly timeless. This divine hand-drawn animated adventure took my breath away, and by the time it came to an end all I wanted to do was run up to the projection booth and make the theatre start it over from the beginning. 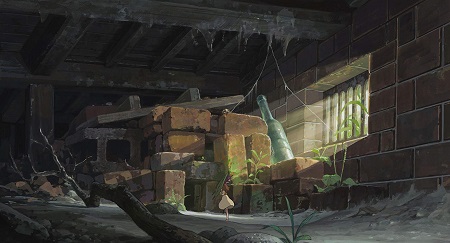 Arrietty (voiced by Bridgit Mendler) and her equally diminutive mother Homily (Amy Poehler) and father Pod (Will Arnett) live in a tiny abode built within a stack of bricks underneath the foundation of a secluded country home. The wily housekeeper Hara (Carol Burnett) has known something strange has been going on for quite some time, while sickly newcomer Shawn (David Henrie) is fascinated by his Aunt Jessica’s (Gracle Poletti) unbelievable stories of the little people secretly hiding in her home and of the doll house her father built in hopes they’d someday choose to live there.

Shawn has seen Arrietty. He knows that she and her family are not figments of his Aunt Jessica’s imagination. Pod and Homily are terrified to learn that their daughter has been having conversations with a ‘being’ (i.e. Human Being), both knowing from past tragedies that they will have to immediately move in order to avoid catastrophe. But the bond between Shawn and Arrietty goes deeper than either realizes, their friendship maybe the only thing assuring the latter’s survival as well as the former’s recovery from a mysterious ailment.

Horton’s story has been adapted before, most notably in 1997 by director Peter Hewitt (Garfield). While I liked that version starring John Goodman and Jim Broadbent, it doesn’t hold a candle to this one from Studio Ghibli. Miyazaki, co-writer Keiko Niwa and director Hiromasa Yonebayashi show the material such respect, such reverence, they manage to bring forth all of its major themes of friendship, family and self-reliance with ravishing ease. Yet, they are not so beholden to Horton’s source material that they’re afraid to make cinematic changes that could help the tale reverberate on a deeper level. It’s a masterful reinterpretation of the novel, each moment spent with Arrietty, Shawn, Pod, Homily and all the rest ones I’ll cherish for quite some time to come.

The animation is as richly layered as any of Miyazaki’s classics, the film having a distinct look and feel that’s similar to Kiki’s Delivery Service and Howl’s Moving Castle but at the same time also achieves a delicately multihued milieu uniquely its own. Colors pop off the screen, rich blues and greens filling the frame giving things an earthly sheen that speaks to the ecological and humanistic balance that’s central to the story. 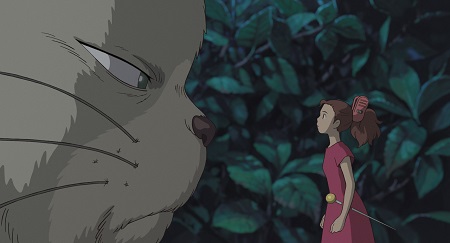 Disney has maybe gone a bit overboard in some respects, casting their “Wizards of Waverly Place” starlet Mendler and by giving her a slightly obnoxious Radio Disney pop song to sing over the end credits (the U.K. version featured Saoirse Ronan in the part). She’s not bad, not at all, she just brings an unceasingly precocious perkiness to her performance that sometimes came perilously close to growing tiresome.

But as far as complaints go this is a remarkably minor one. The Secret World of Arrietty soars, building to an exuberantly tearful finale that’s touching, poignant and natural. If this is the direction Studio Ghibli is going to go now that Miyazaki has begun passing the animation torch into that hands of others then my hope for their continued success is certainly amplified. Their version of Horton’s novel is an absolute marvel, and even though it’s only February there’s every indication I’ve just watched the best animated film I’m likely to see this year.