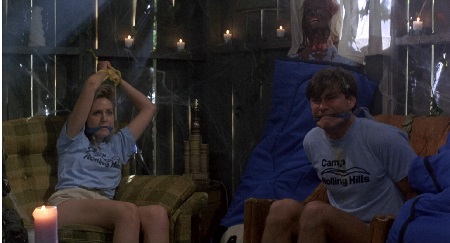 I’m not sure anyone needed a sequel to low budget schlock shocker Sleepaway Camp, but they got not just one but two of them – Sleepaway Camp II: Unhappy Campers and Sleepaway Camp III: Teenage Wasteland – all the same. Angela, now played by the Boss’ daughter Pamela Springsteen, returns to the outdoors four years after the events at Camp Arawak, heading to a new summer camp to help mold a legion of youngsters as she thinks best. She’s supposedly wiser now (and, according to her doctor’s, sane), her boss Uncle John (Walter Gotell, a familiar face to anyone who’s ever watched a classic James Bond actioner) completely unaware of the teenager’s past and extremely happy with her continually upbeat, unabashedly positive attitude.

But, as might be expected, Angela doesn’t take kindly to those that upset the peaceful balance of summer camp life. Soon unruly campers are being mysteriously “sent home,” and while no one would ever suspect the homicidal truth most are starting to take notice crossing the eternally peppy counselor isn’t a very good idea.

There’s not really all that much more to Unhappy Campers than that. Angela talks with the kids about having a good time at camp, they do something to displease her and next thing they know they’ve been dispatched in as gruesome a fashion as she can imaginatively come up with. They in turn wonder what’s going on, why their friends are being “sent home,” and during their investigations they suddenly start to realize their counselor isn’t exactly who she’s been claiming to be. 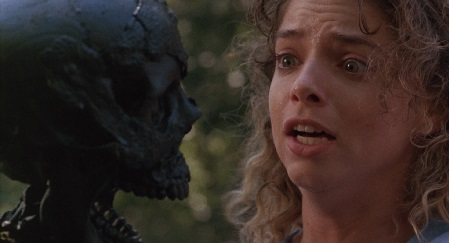 It goes without saying director Michael A. Simpson and his fellow craftsman have taken a decidedly left turn into comedy with these sequels, Springsteen’s valiantly playful performance amidst all the bloodshed and carnage a major clue as far as that goes. Same time, it’s not particularly imaginative and highly uneven, lacking the queasy, uncomforting salaciousness of the original thus keeping memorability levels rather low. On top of that, it’s outdone in most ways that matter by the third chapter in the series, Simpson and company finding their footing in a way that’s gruesomely clever more often than it is anything else.

Still, Unhappy Campers has plenty of lo-fi charm, and while its central exploitive elements aren’t anywhere near as questionable as the first film’s it still has enough blatantly in-your-face material to satisfy even the most demanding of genre fans for the majority (but not all) of its brief 80 minute running time. I find it enjoyable enough in its way, and I imagine most curious enough to learn more about the sequel who take the time to read this review will likely feel the same once they’ve watched it all the way through to its gorily asinine conclusion.

Sleepaway Camp II: Unhappy Campers is presented on a dual-layer 50GB Blu-ray with a MPEG-4 AVC encode and a 1.85:1 1080p transfer.

This Blu-ray features an English DTS-HD 2.0 soundtrack and comes with optional English subtitles.

Audio Commentary with Director Michael A. Simpson and Writer Fritz Gordon – Terrific commentary track, both Simpson and Gordon in fine form willing to talk about their film was somewhat surprising, self-effacing honesty.

A Tale of Two Sequels – Part One (28:06) – Really well done retrospective making-of piece that covers just about every facet of the film’s creation. Superb.

You more or less know what to expect in regards to Sleepaway Camp II: Unhappy Campers sight unseen. For fans, it’s a lot of fun. For everyone else, why are you even reading this review? Scream! Factory’s Blu-ray release is a heck of a lot better than this title arguably deserves, and I for one am thrilled they’ve put so much love, care and effort into making it a reality.